Jet Friday: How Do You Start a Jet Engine 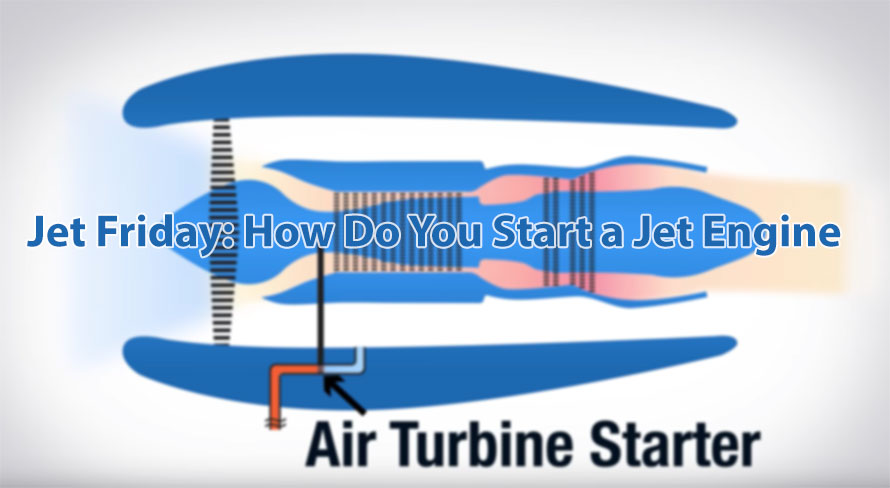 In previous Jet Friday articles, we have covered the jet engine by showing how one works and how turbojets operate in extremely high altitudes at very high speeds. In this article, we will show you how a jet engine gets started.

In the high bypass turbofan, the air passes into the inlet and through the fan. Beyond the fan, part of this air is captured by the engine where it is compressed, enters a burner where it’s mixed with fuel to cause combustion, further powering the fan. Part of that air passing through the fan bypasses the engine and is forced out the back, like the air from the compressor, creating thrust.

As for the fighter jet’s afterburner turbofan, air entering the engine passes through the fan, is then compressed and mixed with fuel, and then ignited in the combustor. The air expands, passes through the turbine, and shoots out the exhaust nozzle to create thrust. Beyond the combustor and turbine is an afterburner assembly where additional fuel is sprayed, mixing with the exhaust gasses for maximum acceleration when needed.

Normal operation of a turbofan or turbojet is fairly efficient. However, at startup, there is no air coming into turbofan needed to start the combustion process. This article contains two videos about how turbofans actually start. In the first, two pilots demonstrate multiple ways to start a high bypass turbofan of a commercial aircraft. In the second video, an engineer demonstrates the startup of a General Electric J79 afterburning turbojet that was utilized in the B-52 Hustler, F-104 Starfighter, and the F-4 Phantom II.

If you enjoy these videos, please share our page with your friends and colleagues. If you like jet-powered aircraft then check out all our many other #JetFriday posts.

How A Jet Engine Starts

How to Start a Jet Engine