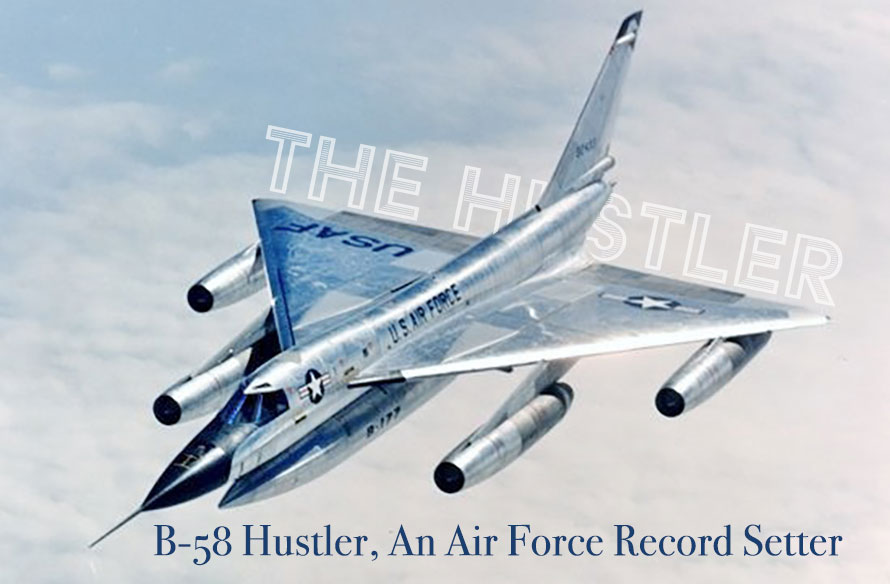 In the new jet era following WWII, America needed to upgrade its bomber fleet from turboprop aircraft like the B-36 Peacemaker to faster, jet engine powered aircraft. The B-47 Stratojet and B-52 Stratofortress both met the need for higher altitude and speed to get above and outrun Soviet defenses. Still, the U.S. Air Force’s B-47, a long-range, six turbojet-powered strategic bomber was designed to fly at high elevations at only subsonic speeds. It could deliver both nuclear and conventional bombs. It entered service in 1951 but it never saw combat as a bomber and was retired in the early 1960s.

The U.S. Air Force requested a bomber that could operate at supersonic speeds. Their request would lead to the B-58 Hustler. It was designed for high speed, high altitude penetration missions to deliver a nuclear payload. In the Cold War, when radars were less effective and before stealth was the pilot’s best advantage to get in and out of contested air spaces, the Air Force chose speed as this aircraft’s defensive tool. It wasn’t that the enemy couldn’t see you. It was that the enemy did not have the tools to catch up to you.

The Hustler would come into service in 1960 and was intended to replace the B-47 Stratojet. This sleek looking supersonic delta wing bomber exceeded Mach 2 at altitudes of 63,000 feet. This placed it well above the speeds of the B-47 and the B-52 and out of reach of Soviet defenses – or so it was thought. But by the time the Hustler was introduced into service in 1960, the Soviets had already made changes in their tactics and technology making their surface-to-air missiles more accurate and putting the supersonic bomber into jeopardy at high altitudes.

The answer would be to fly the B-58 at low levels, just above the landscape and under the radar’s detection capabilities. This created a new problem because at lower levels the B-58 had to reduce its flying speed and the denser air reduced its already limited range even further. 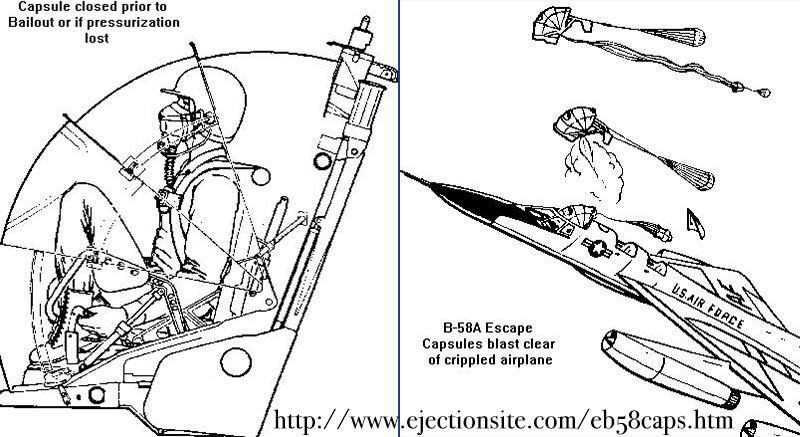 The high-speed flight also posed issues with the crew escaping a damaged aircraft. Bailing out of an aircraft doing Mach 2, or about 1400 miles per hour, is hazardous to a crewman’s health. The wind shear alone could rip a helmet off or bend arms and legs in directions that can cause major injuries. The B-58 Hustler had three crew members: a pilot, a navigator/bombardier, and a defense systems operator who all sat tandem in the aircraft. Each crew member had their own entry hatch into the aircraft and each crew section was separated by a partition from the other. To address the forces acting against the crew during ejection at such high speeds, each crew member sat in a crew seat that was part of an enclosed capsule. The capsule included side-mounted headrest panel to keep their heads from being tossed around. The seat included straps that tightened during ejection to control the arms and legs. To protect against the extreme wind shear, a shell covering enclosed over the front of the crew member. Crew members with size 12 feet or larger needed to watch their toes. To aid in the survival of the pilot until rescue arrived, each capsule had food and equipment needed to supply both on land and a sea landing. Flotation devices were built into the capsule so it would float upright. The capsules were timed to eject in order from the rear to front, the pilot’s capsule the last to leave, to avoid collisions between the capsules. If the ejection pods were accidentally deployed without an actual ejection, latches near the feet could be used to raise the front screen during flight.

Flying at Mach 2 in the late 50s and early 60s over long distances was an incredible feat. Though its mission range was greatly limited without number of refueling, the range the B-58 could cover it did so very quickly. The Hustler set 19 world speed records and the longest supersonic flight in history at the time. On January 12, 1961, on one single flight the B-58 set six international speed and payload records. One of these records was flying over a 620 mile closed course with a payload of 4,409.2 lbs at an average speed of 1,284.73 mph (Mach 1.69).

During its operational history, the B-58 Hustler would win five aerospace trophies; Bleriot Trophy, the Thompson Trophy, the Mackay Trophy, the Bendix Trophy, and the Harmon Trophy.

Ten Years of Operational History – Not One Combat Experience

Even with all the speed records it set over time, the B-58 was not isolated from controversy. It was three times more expensive to operate than the B-52. It had a limited range without a large number of refuelings. Soon after its introduction into service, it was forced to fly missions at lower altitudes and at much slower speeds that it was designed to operate, and it was difficult to fly at these altitudes and lower speeds.

Since it was strictly designed to deliver a nuclear weapon and could not carry conventional bombs, in the short ten years of its operational history, the B-58 Hustler never saw combat, which was a good thing. The Hustler would be retired by the Air Force in January 1970. It would be replaced by the supersonic and nuclear/conventional weapons-carrying F-111 Aardvark, which could also stably operate at low altitudes. 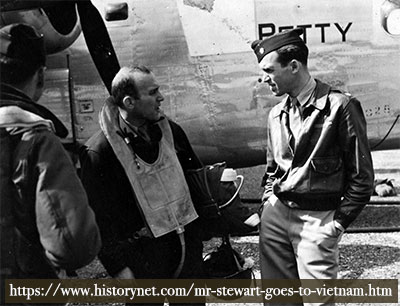 Stewart (right) was no stranger to flying combat. During World War II he logged 20 missions over Germany flying B-24 Liberators. (U.S. Air Force)

Following the B-58, the Air Force’s nuclear-attack mission would fall to low-flying B-52s, B-1s, F-111s, stealthy B-2s, and ballistic missiles.

An Experienced Veteran and Celebrity Promotion

Jimmy Stewart, Hollywood movie star and retired Brigadier General of the U.S. Air Force describes what makes the B-58 Hustler so special. Jimmy Stewart was a veteran of both World War II and the Vietnam War and was also a pilot of the B-36 Peacemaker, B-47 Stratojet, and B-52 Stratofortress bombers.

Convair B-58 Hustler: Champion of Champions

Still today, bombers that stood in for the retired B-58 are still operational and will be for some years to come. The B-1 and B-52 are still part of Strategic Air Command (SAC).

To keep aging bombers like the B-1 flying, their systems must still be maintained even when facing obsolescence issues. Avoiding scrapping repairable parts requires a depot to develop the missing technical data or reverse engineer broken or missing parts. This is especially important when aging platforms like the B-1B Lancer are proposed to fly into the 2030s.

Instead of scrapping repairable equipment, we offer solutions to keep your legacy aircraft in the air and your obsolete mission-critical equipment functioning.

Duotech maintains an AS9100D registration and is a qualified repair station for hundreds of items. Contact Duotech Services today about your MRO needs. Duotech has the capability to repair thousands of different items. Begin your search for you Part Number here or request a Quote for Repair now.