Missile With a Man In It – the F-104 Starfighter 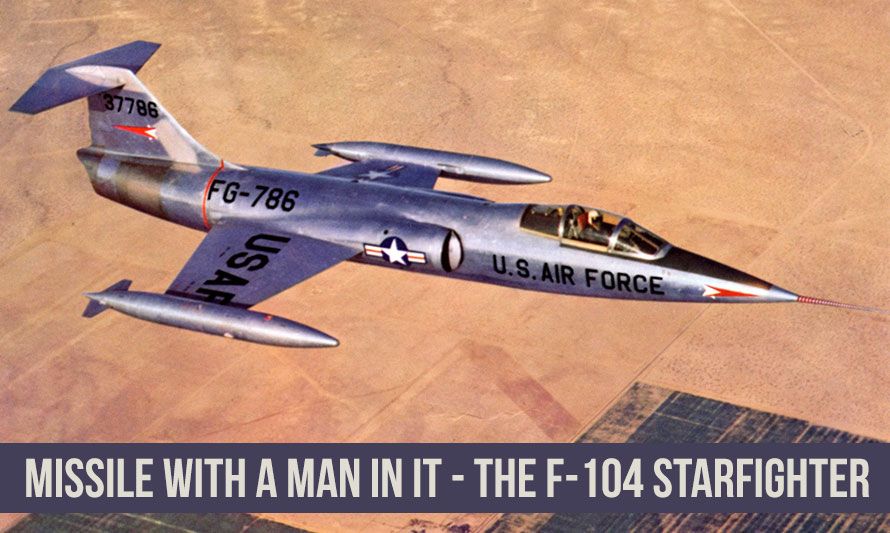 [Watch Video Below] The 1967 Shelby Cobra – an iconic muscle car with a spartan interior and no need for a radio because you couldn’t hear it over the engine anyway. When the driver hammers down on the pedal, the Shelby’s 427ci engine digs in with all 425 hp and propels the car forward to 118 mph in a quarter mile. Not a lot of frills inside the Cobra. Just a whole lot of ‘hold onto something tight’ speed. The 1967 Shelby Cobra is a good example of what a Starfighter is; no frills, just speed!

The F-104 Starfighter — what a great name, Starfighter! — was a supersonic interceptor designed without a lot of extra interior frills. It had a very basic ranging radar system, air navigation system, and a UHF radio. It was armed with a 20mm Gatling autocannon. Initially, it carried two sidewinders on the wing tips, but eventually they added more pylons under wings and body.

The F-104 was not an air-to-air dogfighter. It was designed to get off the ground, climb quickly at a rate of 48,000 ft/min to intercept incoming bombers, strike, and then get away. It was a very good looking aircraft. It looked fast. It would be stated that it looked like it was flying at Mach2 while sitting on the ramp. The Starfighter was designed to be sleek and slender to reduce as much drag as possible. The wings were razor thin and short compared to the long, pointy fuselage, leading to high wing loading – a “missile with a man in it.” As fast as it could fly, the F-104 was known to be a death trap. During high angles of attack, the F-104’s combination of narrow wings and long body which created high wing loading, and its high vertical stabilizer would cause the aircraft to pitch its nose upward violently, stall, roll-over and then go into an uncontrollable spin. A flat spin pilots were unable to recover from, this phenomenon caused crashes and many deaths.

Air-to-air combat was not the Starfighter’s strength. Its strength was to hit and run in a straight line, not stand and fight. Since it could not outmaneuver other aircraft, the enemy would out turn and kill you. If the enemy didn’t kill you, your own aircraft likely would trying to perform aerial combat.

Because of the high vertical stabilizer, the F-104 had a downward firing ejection seat. The Starfighter initially had a General Electric J79 engine. This engine was very unreliable and often had failures, especially during takeoff and low flying. Compound this with the ejection seat and pilots could not eject safely, killing many pilots.

This aircraft killed many pilots over its many years of service in the United States, Germany, Japan and Turkey. Though its speed earned it a nickname of Zipper or Missile With a Man In It, the F-104’s tendency to crash and kill its pilot was also known by various operating countries by Death Tube, Lawn Dart, Silver Sliver, Hooligan, and, of course, the Widowmaker.

During certain throttle settings, the F-104 Starfighter also had a unique howling sound. It led to NASA giving it the nickname Howling Howland. At the 13 second mark in the video below, you can hear the howling/whistling sound of a F-104 Starfighter.

Here’s to Friday, and to all those out there taking it to the edge to keep us FREE, we salute you! See all our Jet Friday posts.