Supporting the Past. Engineering the Future.

Dan and Cheryl Rogers founded Duotech in the year 1982 in Tampa FL. Dan saw the need for obsolescence mitigation. Too many products sold to DoD needed maintenance and repair over time, yet the Original Equipment Manufacturers (OEMs) tended to drop support in favor of selling new products. Drawing on his experience as a Senior Electronics Technician for major defense companies, Dan and Cheryl established their own business. Focusing on two technical capabilities, mechanical and electronic repair, or Duo Techs, the name Duotech was chosen.

He began by reaching out to many DoD agencies and support locations stating Duotech’s capabilities, winning their first contract at the San Antonio Air Logistics Center at Kelly AFB, TX. This first effort was to repair instrumentation recorders for multiple Air Force Bases as well as the FAA. Through demonstrated success, other contracts at Kelly AFB for additional repair work were quickly awarded.

Beginning in 1984, work expanded beyond Kelly AFB and the FAA to multiple DoD agencies around the country, and Duotech began hiring employees. Also, they purchased the 3M Mincom product line from Datatape a division of Kodak developing a greater capability to repair instrumentation recorders. Work began to branch out to other specialties such as computer boards, sensors, and other electronic components. In 1987, Duotech outgrew their FL facilities and for family reasons, Duotech relocated to their new permanent home in Franklin NC.

As technology got increasingly sophisticated, Duotech established an Engineering division in 1997 to help solidify its core repair capabilities. By doing so, it also allowed an expansion into products. Duotech began designing, developing, and producing items such as Form-Fit-Function technology upgrades, cockpit G-meters, and sonar-beacon testers.

Manufacturing and Support to Lockheed Martin’s Skunk Works U2 program earned Duotech a Small Business Supplier of the Year award in 1996 and two small business awards from the Small Business Administration.

Daniel Rogers Jr joined the company as a staff engineer in 2007 after earning his undergraduate degree in Electrical Engineering. He transitioned to managing engineering and became Vice President in 2016. Currently he oversees all engineering operations including product design and development and technical support services. Leveraging Machine Vision work for Caterpillar, Daniel began the design work which resulted in the NEMESIS and ARES RADARs, and ARGUS RADAR Warning Receiver, all major product offerings currently being sold and delivered to Adversary Air companies flying refurbished legacy fighters as training assets for the USAF and US Navy.

Brett Rogers joined the company as Business Development and Contracts 2010 after earning his degree in Business Operations. Since then, Repair and Production revenue have tripled due to the successful addition of dedicated subcontractor programs with major OEMs. He became Vice President in 2016 and currently oversees manufacturing and repair services, production, and logistics as well as contract management, Quality Assurance, and program management.

Dan Bader joined the company as Chief Operating Officer in early 2021, after just over 10 years of executive experience in Defense-related companies specializing in engineering services, military aircraft sustainment and modernization, flight operations, manufacturing, and production, as well as design and development. Before that, Dan served in the Air Force for 27 years in operational and executive leadership positions and amassed almost flight 3,000 hours and 58 combat missions in fighter aircraft.

In 2021, Raytheon awarded a significant contract to Duotech for power supply repair services supporting a major missile defense program. It quickly expanded to support similar efforts across the globe such that now almost 25% of all facilities and personnel are dedicated to this effort.

Duotech looks forward to continued growth and expansion in its high-tech product offerings while remaining dedicated to its core business of maintenance and repair. The vision remains “Supporting the Past. Engineering the Future.” 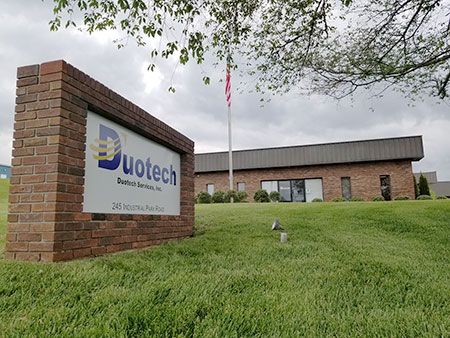