Electronic Warfare for A Successful Mission

A mission package of two EF-18 Growlers and an EA-6B Prowler are preparing to launch from the USS Ronald Reagan. Their intended target is a mobile radar site used to detect aircraft and direct a surface-to-air missile (SAM) site nearby, which is also on their target list. These three aircraft will team up to jam the radar system so the SAM is unable to lock onto their aircraft. This will allow the two Growlers to destroy both locations while the Prowler continues to monitor the battlefield for other threats and jam enemy communications.

After eliminating these two enemy assets, the sky will be clear for the next phase. A group of F-18 Super Hornets, part of the Marine Air-Ground Task Force (MAGTF), will target three enemy artillery positions ten miles inland. This artillery equipment is directed at the beachhead where 48 Assault Amphibious Vehicles (AAV) will insert a reinforced infantry regiment of the Marine Expeditionary Brigade sitting off the coast. The goal is to secure a foothold on the beach and push out, while other supporting equipment is landed by landing craft. With the U.S. now in control of the air, AV-8B Harriers can provide close-air-support for the Marines on the ground as they move forward.

What is Electronic Warfare

When you need to interrupt an enemy’s defensive radar systems on the ground or in their aircraft, it is called electronic warfare (EW). EW is the use of directed energy by laser light or radio waves to attack an enemy or impede enemy assaults via the electromagnetic spectrum. EW also involves detecting emissions from missiles and radar systems to attack the enemy and deny them access or advantage in the EM spectrum.

What are the divisions of electronic warfare?

By administering EA, directed electromechanical energy is used to attack, also referred to as jamming, the enemy’s facilities and equipment to degrade and destroy their combat capability. An electronic attack can be conducted using chaff and decoys to confuse signals being emitted from a missile a radar platform. Jamming can also be performed by using a transmitter to aim a lot of focused energy on a frequency or jumping from frequency to frequency in order to override the enemy’s own signal they receive.

EP means to protect your own facilities and equipment from the enemy’s attempt to degrade or destroy your combat capability. This is conducted by frequency hopping, which means a transmitter frequently jumps from frequency to frequency, sending out the signal and receiving that signal back in a certain time frame on a certain frequency.

ES is the action taken by a commander to search for, intercept, identify, and locate radiated electromagnetic energy for the purpose of immediate threat recognition. The information obtained allows for decision making on whether to avoid or target the enemy source.

There are many instances in recent history of electronic warfare being used in combat, such as when the Israelis took over the Syrian air defense systems in 2007. Using EW, the Israeli forces painted the Syrians a false sky-picture while Israeli jets flew across Syrian landscape and bombed targets.

Interestingly, there is also an example of nature’s use of jamming. The Tiger Moth, a favorite meal of bats, uses ultrasonic clicks to interfere with a bat’s echolocation sonar, confusing the bat and thwarting an attack.

Aircraft are a common platform for employing electronic warfare. Most platforms, both fixed-wing and rotor-wing, will have radar warning receivers like the ALR-69 found on A-10, C-130, and the F-16, which detects and sources potential radar detection threats in a combat environment. It is highly effective at identifying friend or foe (IFF), even in a dense signal environment.

Aircraft employ technology like infrared countermeasures, chaff, flares, and radio frequency decoys to avoid being targeted by infrared and radar-guided weapons and to hide from detection of radar systems. Air, ground, and sea forces will utilize radios that impede an enemy’s attempt to jam their communications. These radios use frequency hopping systems, enabling them to jump quickly from frequency to frequency before an interceptor device can target a single frequency. These various radios use GPS technology and passwords to coordinate their frequency hopping to ensure continuous communication that cannot be intercepted or jammed. Two examples of these radios are the ARC-204, found on aircraft like the E-3 Sentry, and the ARC-166, a transmitter/receiver radio that provides VHF/AM communications with other aircraft and ground elements.

Electronic warfare is also used to deny an enemy’s use of the electromagnetic spectrum. If the enemy cannot communicate between their air, ground, and sea forces, they are at a disadvantage. Some military assets are primarily tasked to carry out the EW mission.

One electronic attack aircraft used today is the EC-130H Compass Call. The Compass is a variation of the U.S. Air Force’s workhorse cargo aircraft, C-130J, and as described by the Dvids website, employs offensive counter-information and electronic attack capabilities. The aircraft is managed by four flight crew and a team of nine who operate the electronic attack equipment in the mission compartment. The EC-130 was first introduced in 1982.

The EA-6B Prowler is another electronic warfare aircraft of the United States. Introduced into service in 1971, the Prowler is a four-seat, twin-engine variant of the A-6 Intruder. It has a crew of four, a pilot and three Electronic Countermeasures Officers. Its capabilities include radar jamming and deception, threat location, and gathering radio intelligence. The EA-6B is retired by the U.S. Navy but currently still in service with the U.S. Marine Corps.

A U.S. Navy carrier-based electronic warfare aircraft is the EA-18 Growler. This Navy EA aircraft retired the EA-6B beginning with operational service in 2009. With a flight performance similar to the F/A-18E/F, the Growler can provide escort jamming as well as stand-off radar jamming and deception. The Growler has the capability to carry a few weapons on nine available weapons pods. With its capabilities of Mach 1.8 and a range of 1,275 nm, it can support the F/A-18 through all phases of the attack, delivering ordnance while providing detection and jamming against all known surface-to-air threats. 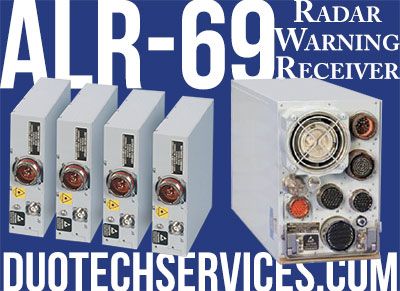 While the F-18s, EA-6Bs, and EA-18s continue their mission above supporting the MAGTF, the pilots are provided a strong defense against ground-to-air and air-to-air attacks. To identify a radar threat from ground or air, they are equipped with ALR-69 Radar Warning Receivers. When targeted, the pilots have a chance to repel an attack with the ALE-47 Countermeasures Dispenser System using flares and chaff to confuse and protect from air-to-air and surface-to-air heat-seeking missiles.

Extensive Test and Repair Capabilities for ALE-47 and ALR-69

Duotech has extensive test and repair capabilities for the systems and subsystems of both the AN/ALE-47 and AN/ALR-69. Even with tight funding and rising repair costs from the OEM, systems like the Countermeasures Dispenser System and Radar Warning Receiver must be maintained to ensure mission-critical components are ready to keep those fighters in the air.