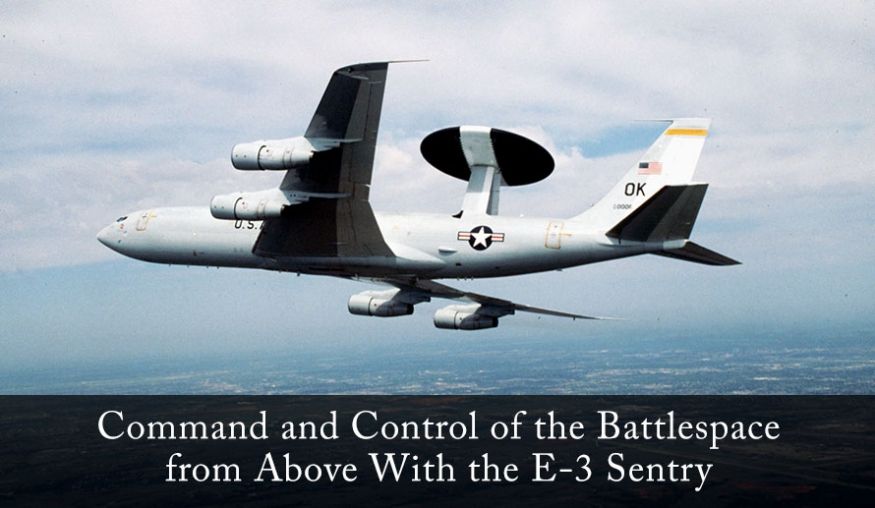 In the middle of the night, four container trucks loaded with supplies rumble down a dark desert road headed to resupply an insurgent camp in the hills of Afghanistan. With headlights off and the drivers on high alert, the convoy and its two smaller pickup truck escorts are near their destination and believe they have gone undetected. That is not the case. Unknown to them, they are being tracked by an OH-58D Kiowa Observation Helicopter, which relays the convoy’s position and bearing to an airborne command center flying at an elevation of 15,000 feet approximately 50 miles away. Using the surveillance provided by the Kiowa, the airborne command and control center has been monitoring the resupply team for over an hour. In fact, this aircraft, with its 21 person crew, is simultaneously monitoring the convoy, along with ten other separate ground targets hundreds of miles apart, and directing four friendly coalition supersonic jets and six helicopters. Within moments, the flying command post will task two of those aircraft, an F-16 Fighting Falcon and an AH-64 Apache helicopter, to eliminate the insurgent camp and stop the resupply convoy. The flying control center is an E-3 Sentry, an airborne warning and control system, also known as AWACS, that provides surveillance, command, control, and communications in all weather conditions. This aircraft, with its distinctive rotating radar dome that rises above the fuselage, functions as a command and control center for battlefield management. Its proven radar system can detect aircraft, vehicles, and ships from long ranges, and provides surveillance from the surface of the Earth to the stratosphere, whether over land or water. The AWACS can detect multiple aircraft simultaneously, identify them as friend or foe, track the aircraft, and also direct friendly aircraft to intercept the targets. To support ground operations, the Sentry provides commanders on the ground with detailed information about the battlefield, direct close-air support, and critical reconnaissance information. Friendly naval forces can benefit from AWACS with tracking of both friendly and enemy naval vessels and aircraft.

The AWACS has a flight crew of four – two pilots, a navigator, and a flight engineer. Depending on the mission, the E-3 Sentry also carries a mission crew of 13-19 airmen. With its powerful APY-1 or APY-2 passive electronically scanned array radar system, the AWACS has a radar range of over 200 miles for low-flying aircraft and near 400 miles for aircraft flying medium to high altitudes.

Five nations operate the E-3 Sentry. These include the United States, France, Saudi Arabia, Japan, and the United Kingdom. NATO has also purchased 18 E-3 aircraft which are used to monitor airspace for NATO operations around the world. Since it was introduced into operational service in March of 1977, over 68 E-3 Sentry aircraft have been produced and have patrolled no-fly zones over Bosnia and served in Operation Desert Shield, Enduring Freedom, and Iraqi Freedom.

DSI technicians support avionics and radar systems of the E-3. This DPY-1 Video Processor CCA Test Fixture shown here is a breakout for Duotech’s Automatic Reconfigurable Test and Emulation System, or ARTES. This fixture was developed by Duotech engineers to test circuit card assemblies from an E-3 AWACS. With this test fixture, DSI technicians can rapidly evaluate individual circuit cards from an AWACS video processing system to determine what components on the circuit board are defective. DSI then repairs the systems to return the critical avionics to full service.