Jet Friday: From the Cockpit View, Name the Aircraft

Click for Video Can you identify the aircraft in this video? Is the first one an F-15 Eagle? It is hard to tell unless you are familiar with the cockpit. The jet screams across the desert just above the deck, weaving through canyons of tall rock. Finally, at the end of the first segment, the fighter joins his wingman, giving away that it is indeed an F-15.

The second obviously is an F-18 Hornet ripping through the sky over the big blue ocean. You can clearly see an aircraft carrier off the pilot’s starboard side early on in the video.

The bubble canopy of the third aircraft gives it away quickly that this jet fighter is a F-16 Fighting Falcon. This video shot from just over the pilot’s shoulder demonstrates the excellent 360 degree field of view this frameless canopy offers. 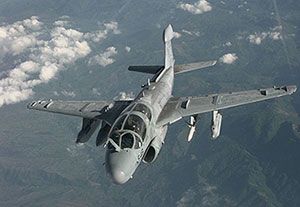 The final aircraft seems to be an EA-6B Prowler. This electronic warfare aircraft has a crew of four, a pilot and three electronic countermeasure officers. The aircrew sit side-by-side, two in front, and two behind, giving this fast mover a much wider cockpit compared to other jet fighters. In this video only the pilot is present in the front two seats.

Enjoy these views from the inside of jet fighters. Have a great Friday! Warning: this video’s music contains strong language (which may be unsuitable for children)