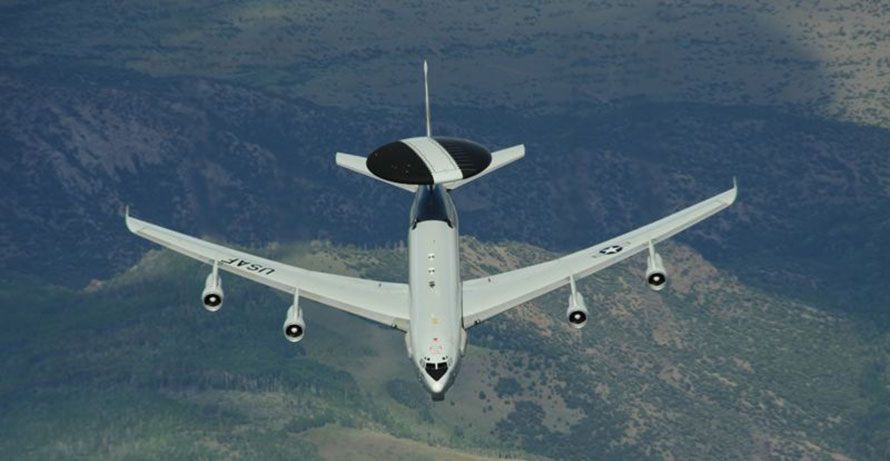 During a long-range nighttime patrol over Northeastern Iraq, a U.S. Air Force E-3 Sentry cruises at 27,900 feet above the desert. The crew is providing overwatch for a truck convoy being escorted by Iraqi ground troops. Three miles up the paved public road from the convoy, the E-3 detects activity on the back side of a hill overlooking the road. Fourteen heat sources with weapons have gathered in preparation to ambush the oncoming troops and convoy. The E-3 crew communicates with a pair of AV-8 Harriers and a strike is on the way. The crew of the Sentry also notifies the Iraqi troops to hold up short of the targeted area. To avoid tipping off the ISIS fighters who might attempt to identify the transmission’s frequency and jam it, the aircraft and ground connect with radios that are near impossible to intercept. These radios use frequency hopping systems enabling them to jump quickly from frequency to frequency before an interceptor device can target a single frequency. These various radios use GPS technology and passwords to coordinate their frequency hopping to ensure continuous communication that cannot be intercepted or jammed.

The AN/ARC-204 is a “HAVE QUICK II A-NET” transceiver. This communications equipment requires line-of-sight between transmitter and receivers and is used primarily for aircraft, shipboard, satellite and others where line-of-sight can be achieved. Communicating with coordinating units is important when running operations to intercept, capture, or disrupt threats to the United States borders. You don’t want to tip off the target and miss the opportunity to eliminate any threats. Interacting between air and ground elements with communication radios like the ARC-204 Receiver – Transmitter RT-1638/A shown here can mean the difference between eliminating a threat and a team that slips away to try again later.

Duotech has extensive test and repair capabilities for the ARC-204 HAVE QUICK radio, and other electronic systems of the P-3, like the APG-66 and APS-137 radar systems. Backed by 34 years of experience, Duotech provides repair services of electronic components for a variety of fixed-wing and rotary-wing aircraft systems. Duotech maintains an AS9100C registration and is a qualified repair station for thousands of items.