Waiting in Silence, America’s Aircraft in The Boneyard 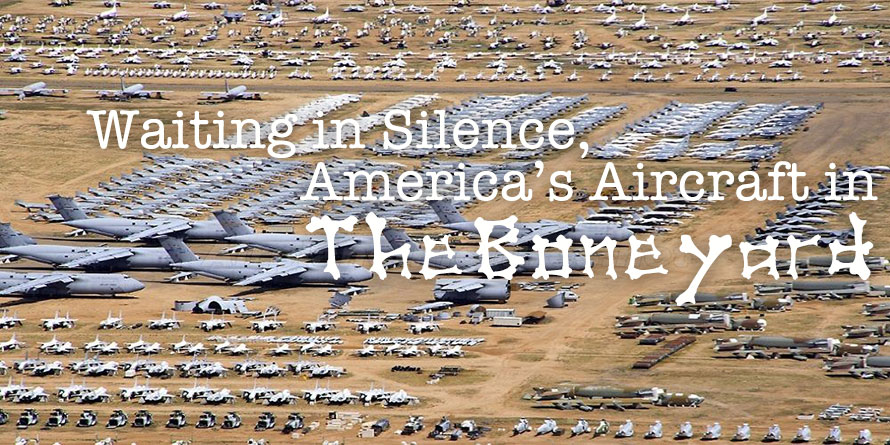 In the middle of the dry Sonoran Desert just outside Tucson, Arizona lies an air force much larger than most other countries around the world. Consisting of over 4000 aircraft, the inventory includes bombers, cargo, fighters, and refuelers in varying stages of their life cycle. The majority of these aircraft are not fired up for a regular training flight or even on a regular maintenance schedule. They sit silently baking in the dry air until called back to duty, cannibalized for parts, or scrapped. 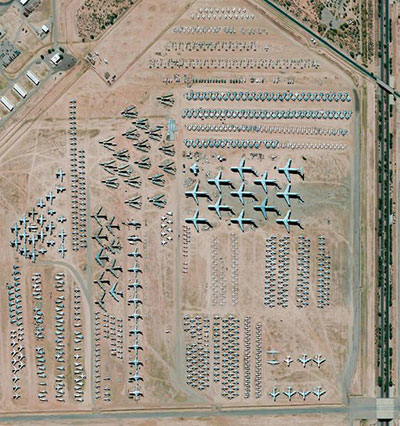 This silent sanctuary that looks more like a giant air museum is the aircraft boneyard for the U.S. Army, Air Force, Navy, Marine Corps, Coast Guard, and some federal agencies like NASA. Here the planes and helicopters can be in varying stages of their life cycles. They may be present for long term storage, parts reclamation, on a flying hold, or it could be due to excess of DoD needs. These are not just old retired military aircraft. In these photos, you can see some of the inventory of past and present aircraft both retired from service and excess of those still currently serving. Retired bombers, cargo haulers, fighters, and helicopters like F-4 Phantoms, EA-6B Prowlers, C-27 Spartans, and F-86 Sabres can all be seen here. Many current platforms like F-15 Eagles, F-16 Fighting Falcons, UH-60 Black Hawks, A-10 Warthogs, B-1 Bombers, and C-130 Hercules are excess waiting to be returned to service if needed or cannibalized.

“The Boneyard” consists of 2,600 acres of storage area and houses more than just aircraft. This location also contains some retired excess military vehicles and is used for missile storage. Managing The Boneyard, which is housed at Davis-Monthan Air Force Base, is the 309th Aerospace Maintenance and Regeneration Group (AMARG). This group was established in 1946 as storage of B-29 Superfortress and C-47 Skytrain following WWII.

What makes this part of Arizona the prime location for America’s Boneyard, the biggest aircraft storage location in the world? The dry desert’s low humidity and high altitude limit rainfall to 11” annually. This reduces rust and corrosion so that aircraft can be preserved for a possible return to service or for parts for other aircraft. The hard alkaline soil allows the aircraft to be moved around without creating paved storage areas.

Though the majority of the aircraft have been abandoned, retired from service, or are non-functional, not all are there to live out their final days. There are aircraft that will arrive at the 309th for the purpose of aerospace maintenance and regeneration capabilities. They arrive at the boneyard to have parts replaced or improved, even getting parts that are in great shape from the other planes in storage.

Due to the scrapping of parts, or because of platform retirement, an aircraft stored for a long period of time could see their service come to an end in the desert. Aircraft that arrive and go through the preservation process to enter long term storage could actually return to full service condition. The Marine Corps flies F/A-18 Hornets. Over the years some of their Hornets have been stored at the Boneyard, gathering dust, and standing by until they are needed. As the Marine Corps await their new F-35B Lightning II aircraft, the Hornet’s replacement, Marine Aviation has had a need to return some of their stored Hornets back to the Fleet. The fighters will be reclaimed and refurbished, the sensitive electronic equipment returned to the airframe, and when ready, returned to the fleet to help the Marine Corps bridge the gap as they await their 5th Generation Fighter.

The 309th AMARG employs over 600 people and all are civilians, except for the commander. 75% of the employees have prior military experience and of those 50% are retired from the military service. The Boneyard also hosts fighter squadrons of the 355th Operations Group that fly the A-10 Thunderbolt II. The Boneyard also provides the perfect backdrop for films like “Transformers: Revenge of the Fallen.” Tom Petty also chose the location for his music video “Learning to Fly.”

If you want a bus tour of The Boneyard you can schedule a trip with Pima Air and Space Museum. If you want to see how 309th AMARG protects the stored aircraft and learn more about The Boneyard, watch the following video by the Arizona Public Media

Nuts and Bolts of The Boneyard