Training Naval Aviators in Carrier Operations in the T-45 Goshawk 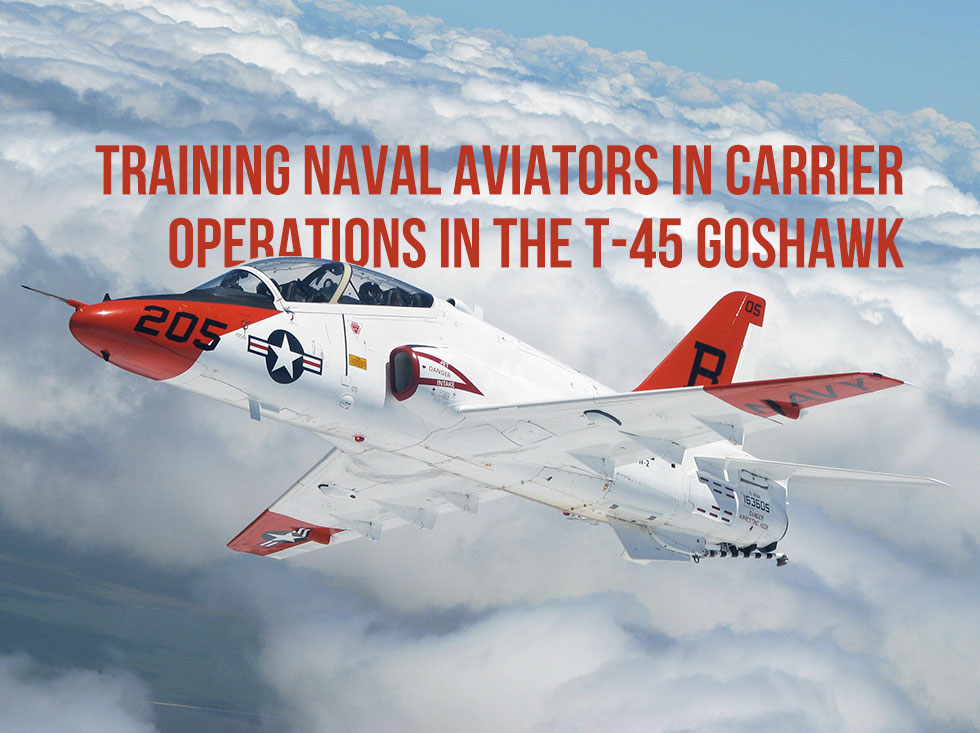 It is a difficult task to become an aviator in the United States military. There are stringent physical standards to meet. To become a pilot you must be an officer. To be an officer you must have a four-year degree. You need to be a U.S. citizen and your vision has to be 20/20. If you are part of the small percentage of candidates to be chosen through selection and then pass aeronautical screenings and the aviation selection test battery, then you will be designated a student naval aviator. The training is very demanding and typically lasts 18 months to two years to accomplish ground and flight training. During flight training, pilots will see primary flights in a propellor aircraft like the T-34 Mentor or T-6 Texan. Eventually, training will lead the student naval aviator down one of the four pilot training pipelines. One would be advanced strike fighters leading to jets like the AV-8B Harrier and F-18 Hornet. Another option would be Advanced Maritime which would lead to the KC-130.

If you proceed down the path to advanced strike fighters, you’ll find yourself in the current jet engine training aircraft the T-45 Goshawk, a carrier-capable trainer. It is used for intermediate and advanced portions of the Navy pilot training program for jet carrier aviation and tactical strike missions. The pilots chosen for the advanced strike pipeline are assigned to Naval Air Station (NAS) Meridian, MS or NAS Kingsville, TX. There they will fly the T-45 while learning instrument flying, formation flying, nighttime flying, bombing and air combat maneuvering, and other more advanced training. One of the important training segments for naval aviators involves becoming carrier qualified. The aircraft a naval aviator is expected to fly commonly operates from aircraft carriers and knowing how to launch and land on one is a requirement.

Also Read: Jet Friday – As a Fighter Pilot You Definitely Recognize This Aircraft

The T-45 has a single turbofan engine that produces 5,527 lbf. Compare that to one of the other fighters a naval aviator may pilot, the F-18 Hornet, which has two powerful turbofan engines that produce 11,000 lbf of thrust each. The Goshawk seats two crew, a student and his pilot. It also only has one hardpoint under each that may carry a practice bomb. The F-18 has a total of 9 hardpoints for live weapons. The F-18 has a maximum speed of 1,190 mph while the T-45 only 645 mph. The Goshawk has an empty weight of 10,403 lb while the Hornet is 23,000 lb. The smaller size and less power associated with the Goshawk make it a perfectly sized aircraft to teach inexperienced pilots.

Introduced into service in 1991, this naval training aircraft was developed to replace the T-2 Buckeye and A-4 Skyhawk trainer aircraft. Initially, the T-45A had an analog design cockpit. Over the following years through the Required Avionics Modernization Program (RAMP), all T-45A would be upgraded to a digital cockpit display and designated the T-45C

In the following videos, you can experience Naval Aviators training in aircraft carrier operations with their T-45 Goshawk. Landing a fast-moving, powerful aircraft onto a carrier at night that is moving while being tossed around by the seas is one of the most difficult flight operations a pilot can perform. As such, these pilots will spend countless hours, days, and weeks practicing catching the cables while being graded before they are designated carrier qualified.

Also Read: Jet Friday – As a Fighter Pilot You Definitely Recognize This Aircraft

Training to Land on an Aircraft Carrier IKE & the T-45