A Marine infantry squad is assigned house-to-house clearing of a couple of small buildings in a small village. The Marines have already pushed through four of them with little resistance. Dividing the village is a rough, dirt-covered street and on the other side are five more of these little houses. As they stack up and prepare to cross the open terrain of the street, they encounter small arms fire and RPGs. The firing is not from the buildings but rather a small elevation right next to the village overlooking the road area. The insurgents have the advantage to control the entire area from this location and the unit is forced to retreat into a building next to the road. The squad leader calls in air-support to the coordinates of the small rise providing cover for the insurgents.

Close-air-support (CAS) may come from any air unit of the United States military services supporting that region. The Army may have available a Little Bird or an Apache. The Air Force might assign an A-10 Thunderbolt, a Reaper UAV, or even an AC-130 gunship. If it is close to the sea, the Navy might direct a carrier-based F/A-18 Super Hornet or an F-35 Lightning II. 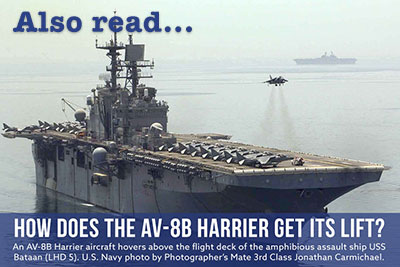 Also read “How Does the AV-8B Harrier Get Its Lift?”

From the Marines, the squad might receive air support in the form of an F/A-18 Hornet or AH-1 SuperCobra. There may even be an AV-8B Harrier II based nearby that can scramble out and deliver a devastating blow.

The AV-8B Harrier is a V/STOL, vertical/short take-off and landing ground-attack aircraft. It was designed to provide a close-air-support aircraft that can be stationed at forward operating bases near the Marines it supports. It doesn’t need an airbase or an aircraft carrier to provide CAS operations. Just a clearing big enough for take-off and landing.

The AV-8B was introduced into service in 1985. Harriers have been serving the United States, United Kingdom, Italy, and Spain. The aircraft has a single pilot and is powered by one Rolls-Royce vectored-thrust turbofan that generates 23,500 lbf. Once it is out of VTOL, the Harrier can reach speeds of up to Mach 0.9 or 673 mph. With a range of 1,400 miles, its combat radius is 350 miles. To provide that close-air-support the Marines above are counting on, it has 1 25 mm 5-barreled rotary cannon and 6 under-wing pylons to hold up to 9,200 lbs of rockets, missiles, or bombs.

Shortly after the call for support, the Marine squad is notified that two AV-8B Harriers are en route to pummel the insurgent location. Once the Harriers each make their pass to drop multiple gravity bombs and clear the area, a nearby AH-1 Cobra comes in to mop-up and confirm no more threats exist on the hill overlooking the street. The Marines then proceed across the street to continue their search and find that militant they were looking for.

A video of the brief history of VTOL and V/STOL aircraft can be seen below, The Real Life Sci-Fi of Vertical Take-Off Planes.

Besides the Marine Corps’ Harrier and helicopters, they also have another VTOL aircraft, the V-22 Osprey. The Osprey is a multi-mission tiltrotor aircraft that can perform short take off rolling down a runway or vertical take-off like a helicopter out of a cleared area. It provides a mission roles for assault transport for Marines and carrying equipment and supplies.

The Marine Corps also plans to replace the aging AV-8B Harrier with the F-35B Lightning II. The B variant of the F-35 is the short takeoff and vertical landing STOVL that will be the future of CAS for the Marine Corps. More about the F-35B is available in the video below too.