With A Growl Surface-to-air Missile Systems Are Blinded 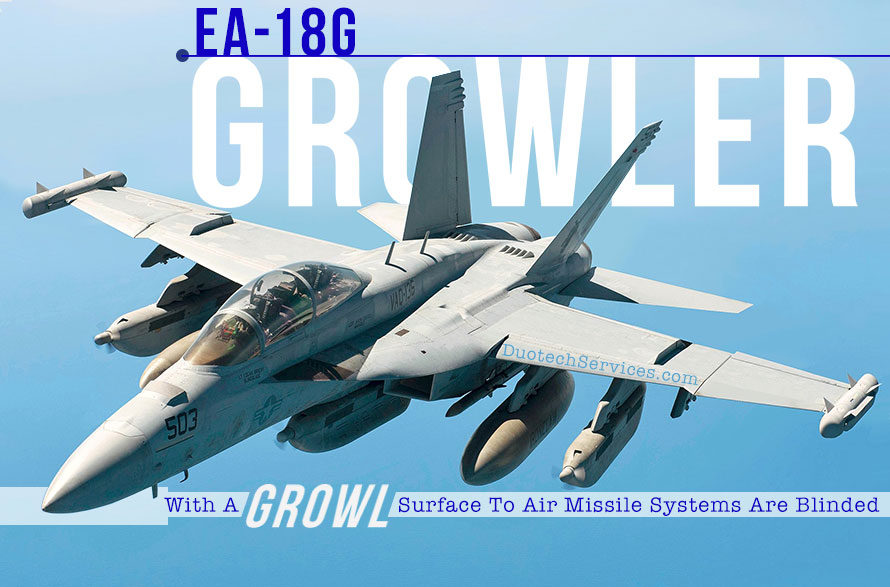 The F-18 Super Hornet is a very powerful, carrier-capable aircraft that serves the United States Navy around the world. As part of a carrier wing, an F/A-18E/F Super Hornets would be one of 80 plus fixed-wing and rotary-wing aircraft stationed on a Nimitz class carrier. This seagoing airbase allows the U.S. to project power in any part of the world. The carriers operate in international waters enabling the U.S. to launch and recover strike fighter aircraft without the need to obtain landing rights on foreign soil.

The F-18E/F can patrol and strike where needed using powerful weapons like its internal 20 mm rotary cannon, air-to-air missiles, and air-to-surface ordinance. The Super Hornet utilizes an active electronically scanned array (AESA) radar to find and lock on to targets. The pilot is equipped with sophisticated technology, like the Joint Helmet Mounted Cueing System (JHMCS), allowing superior situational awareness when engaged in air-to-air combat or conducting a bombing mission. The technology available to the men and women who operate these multirole fighter aircraft allow force projection and carrier strike group security like no other.

Yet, even with their technological advantages, a strike team consisting of F-18E/F Super Hornets needs assistance to arrive on station safely, perform their mission, and return successfully. A surface-to-air missile (SAM) system is an ever-present danger on the battlefield to fighter aircraft. Air defense systems like the S-300 of S-400 can detect, identify, and fire on an aerial target like the Super Hornet. Though the F-18 is equipped with chaff and flare- dispensing advanced countermeasures, flying undetected by a SAM site is a much better way to ensure the pilots reach their objectives and return back to the carrier.

To provide this magic trick, the F-18E/F Super Hornet strike team will likely be paired with an aircraft designed to thwart the electronic signals used to pinpoint, target, and destroy the aircraft. An electronic warfare aircraft’s mission is to disrupt a SAM systems’ radio signals by jamming and confusing it using radar jamming methods. There are large aircraft that specialize in electronic warfare like the EC-130H Compass Call, a specialized version of the C-130 Hercules. The EC-130 disrupts enemy command and control communications and other electronic attacks against the enemy on the battlefield.

Also read: From Prowl to Growl: The Last Squadron of the EA-6Bs is Deactivate

If the mission calls for a smaller, faster aircraft that can join the strike team, then there is a specialized variant of the Super Hornet designated the EA-18G Growler. The EA-18G looks like the Hornet but does not have internal guns and most of the hardpoints are fitted with jamming pods to support its mission. For its own protection, the EA-18G carries two AIM-120 AMRAAM medium-range air-to-air missiles that are fire and forget weapons. The Growler’s electronic warfare systems provide mission support by hiding the strike team’s existence or degrading the SAM’s radio signal effectiveness to locate it. The EA-18 can also locate and destroy a SAM site by carrying two AGM-88 anti-radiation missiles.

Currently, the United States Navy and Royal Australian Air Force operate the EA-18G Growler. Like the F-18 Super Hornet, the Growler is a very capable aircraft, powered by 2 turbofans that produce 22,000 lbf of thrust each. It can reach Mach 1.8, or a max speed of 1,190mph. Its range is 1,275 miles with a combat radius of 449 miles. Like the Super Hornet, the Growler utilizes the AN/APG-79 Active Electronically Scanned Array (AESA).

The predecessor of the Super Hornet is the F/A-18 Hornet. This F-18 entered service in 1983 and despite its 30 plus-year-old airframes is still a very dependable platform in service with the U.S. Marine Corps, Royal Australian Air Force, and Spanish Air Force. However, the F/A-18E/F Super Hornet is not just an upgraded F-18 Hornet. The Super Hornet is actually a newer, larger, and stronger airframe based on the design concepts of the Hornet. The aging U.S. Marine Corp’s F-18 Hornet along with their AV-8B Harrier and EA-6B Prowler is due to be replaced by the new F-35B Lightning II.

As aging fighters like the F-18 Hornet continue to serve around the world, their major systems like its radar, communications, and avionics must still be maintained even when facing obsolescence issues. For it to remain mission effective, systems like the F-18’s forward-looking infrared radars (FLIR) need to remain operable and reliable. The AN/AAS-38 Nite Hawk Targeting Pod, the Hornet’s FLIR, allows it to locate, positively identify and track targets day or night in all weather conditions, present real-time imagery on the cockpit display and HUD, and fire and control laser-guided munitions. 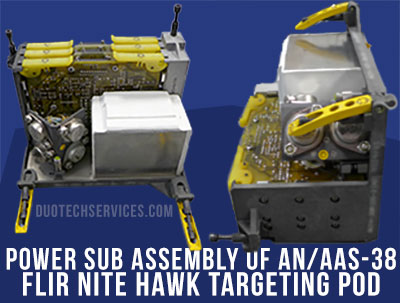 Avoiding scrapping repairable parts requires a depot to develop the missing technical data or reverse engineer broken or missing parts. Even with tight funding, subsystems like the power subassembly module of the Nite Hawk Targeting Pod shown here must be maintained. This requirement has caused a reduction in new manufacture requirements, but also a growth in depot and component repair needs. Often the only way to maintain these systems is to reverse engineer obsolete technology and develop remanufactured or re-engineered “Form/Fit/Function” replacement units. This and other power subassembly modules were repaired and returned to the end user to be put back into service with the F-18 Hornet.