This Ugly Aircraft Could Have Replaced the Falcon, Hornet, and Harrier 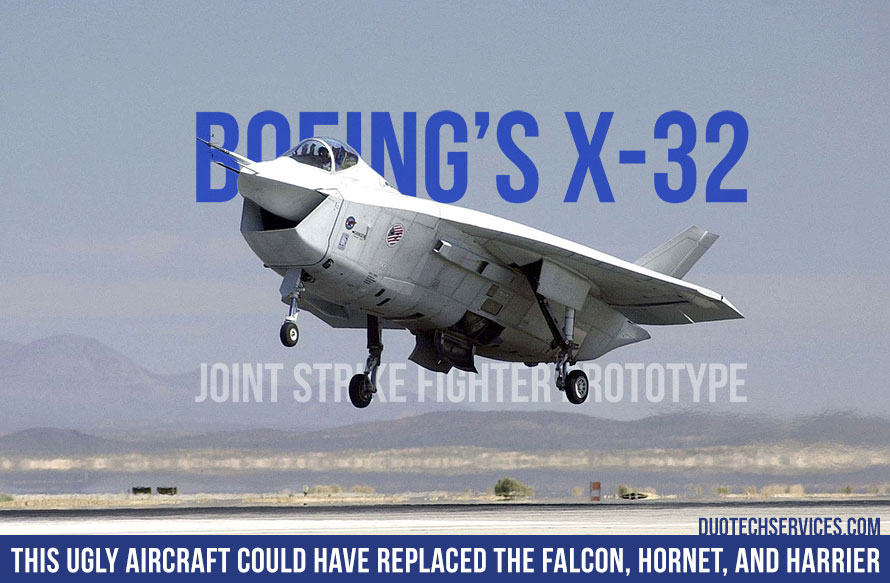 In 1992, the United States began the process of searching for the replacement of their lightweight fighter aircraft. The Joint Strike Fighter Program would identify through a competition the next stealth multirole fighter intended to replace the F-16, A-10, F-18, and the AV-8B. Before the F-35 Lightning II would become crowned the new stealth multirole fighter, there were two concept demonstrator aircraft battling each other to be the winner.

The Joint Strike Fighter (JSF) program requirements would prioritize reducing costs of ownership by providing a variation of a basic aircraft design that shared 80 percent of their parts to satisfy the needs of three U.S. services. The ultimate goal would be to outfit U.S. military aviation with just two stealth fighter aircraft through 2040, the F-22 Raptor and this Joint Strike Fighter. The winning design would have to complement the U.S. Navy’s F/A-18E/F fighter. It would replace the U.S. Air Force’s F-16 and A-10 as well as complement their F-22. The Marine Corps needed a replacement for both the AV-8B and the F/A-18, making the JSF their only multi-role fighter aircraft. The United Kingdom also expected to replace both their Harrier and GR.7 aircraft. There were other countries who flew the F-16, F-18, and AV-8B that would also be potential customers of the Joint Strike Fighter.

In 1996, after initial proposals were submitted by McDonnell Douglas, Northrop Grumman, Lockheed Martin, and Boeing, two companies were given contracts to begin developing prototypes. The competing companies and their prototypes would be Boeing’s X-32 and Lockheed Martin’s X-35. Both prototypes were required to demonstrate conventional take-off and landings, as well as carrier operations and short take-off and landings.

To achieve the short take-off and vertical landing (STOVL) requirement for the Marine Corps, Boeing chose a direct-lift thrust vectoring system for the X-32. This option was similar to the way the AV-8B Harrier achieved STOVL. This required the engine to sit directly behind the pilot to change the center of gravity from the rear of the aircraft to just behind the canopy. Thrust nozzles near the center of gravity would provide the X-32 hover capability nearly identical to the Harrier. To provide enough air intake to power the thrust vectoring, the X-32 would have the large odd-looking intake below the pilot. An issue with direct-lift thrust vectoring is the potential for what is called a compressor stall, or pop stall because of the pop sound heard when the stall occurs. This is when an engine stalls during low level hovering due to hot exhaust gases bouncing off the ground and reentering the intakes. The hot gases impede the proper functioning of the turbofan engine, causing the compressor to stall. The aircraft then loses power and drops the remaining distance to the ground. 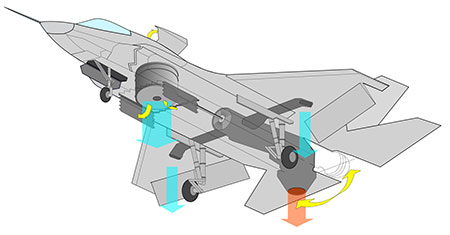 As for the X-35, Lockheed Martin went a different route. To meet the STOVL requirement, the X-35 would have a shaft driven lift fan situated behind the pilot and thrust vectoring nozzles from the turbofan. The shaft of the lift fan would be powered by the turbofan. Though the lift fan reduced the high-velocity hot air from stalling the engines, the tradeoff would be reduced fuel storage and dead weight during flight since the fan was only engaged during takeoff and landings.

In October 2001, the X-35 was chosen as the JSF winner. One of the main reasons the X-35 was selected was its direct lift system. The X-35 would become Lockheed Martin’s F-35A Lightning II and its first flight would be December 2006. Through the years, the F-35 has run into many complications. This one-plane-fits-all requirement has meant long overdue delays because of design changes, structural corrections, and degraded performances compared to initial claims. These have also led to cost increases of more than 43% since 2001 based on a 2015 Pentagon Selected Acquisition Report.

Though it has faced many major setbacks, the F-35 has continued to progress and reach its milestones along the way. In August of 2016, the USAF has declared the F-35A combat capable. The Marine Corps declared the F-35B to have achieved Initial Operational Capability (IOC) in July 2017. The U.S. Navy’s F-35C, the aircraft carrier version, is on track to achieve IOC in February of 2019.

Despite the F-35 bursting onto the scene, many countries still operate the aircraft the F-35 is designed to replace. This also includes aircraft that will still serve the United States until the F-35 fully replaces its fleet. As aging fighter and cargo aircraft like the F-5, F-16, C-130, and many others continue to serve around the world, their major systems must still be maintained even when facing obsolescence issues. Avoiding scrapping repairable parts requires a depot to develop the missing technical data or reverse engineer broken or missing parts. This is especially important when aging platforms like the F-16s and C-130s are proposed to fly into the 2030s.