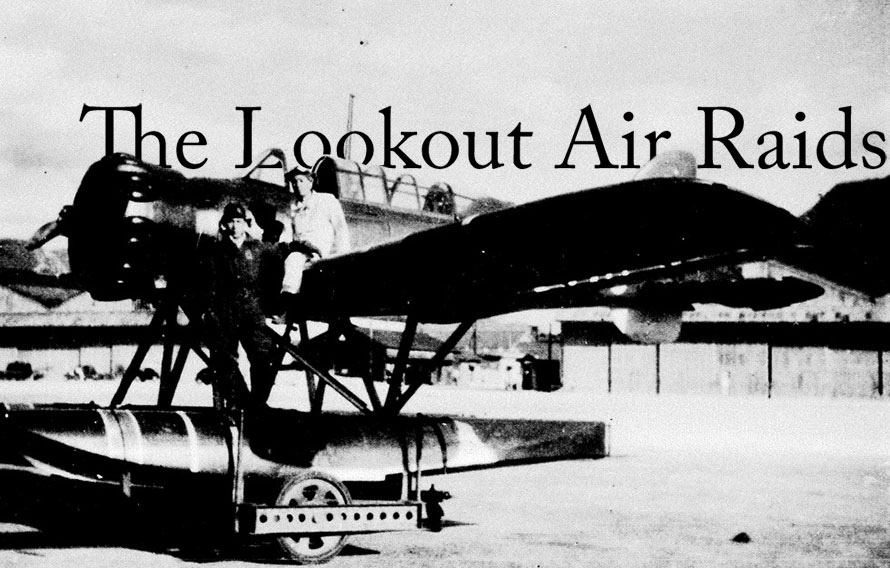 With these events occurred across the European landscape and on the vast Pacific waters, there was no direct action against the continental United States…or was there? Maybe, like most, you have not heard of a little known bit of WWII history that occurred in September 1942 off the coast of Oregon. No movie has told this story. It’s not a historical event we were taught in school. Despite that, the Japanese did carry out an attack on the United States mainland but the outcome was far less effective than what they had hoped.

The Japanese submarine I-25 would play a part in this attack that would become known as the Lookout Air Raids. I-25 slipped through underwater minefields to approach the west coast by following fishing vessels. On June 21, 1942, off the coast of Oregon, the Japanese sub would surface at midnight to fire 17 shells at a small Army base named Ft. Stevens. Due to a lack of light to see where they were shelling and the fort’s commander not firing back and thereby giving away his position, the shells missed the fort completely but did destroy a baseball field nearby. A few months later, I-25 would make history by launching an aircraft that would execute the first-ever bombing of the U.S. mainland by an enemy aircraft.

For many years, the Japanese had been working on developing a submarine big enough to carry a seaplane. The I-25 was one of those submarines capable of carrying a Japanese Yokosuka E14Y Glen Floatplane. Commissioned in 1941, the I-25 was a 365-foot attack submarine that had a range of 16,000 miles and carried a crew of 94 men. Its two diesel engines and an electric power motor enabled the submarine to travel at 27 mph on the surface but only 9 mph when submerged. For its journey, the plane was housed in a watertight capsule just ahead of the conning tower. After surfacing, the submarine crew could assemble the plane and launch it using a compressed-air catapult in only a few minutes.

The Glen carried a crew of two, a pilot and an observer. Its 2 bladed wooden propeller powered by a 9 cylinder radial piston engine powered it to a top speed of 150 mph and a ceiling of 17,190 ft. It was armed with a 7.7 mm machine gun and carried two incendiary bombs. Made of a wood and metal frame and covered in fabric, the Glen could fly for five hours. 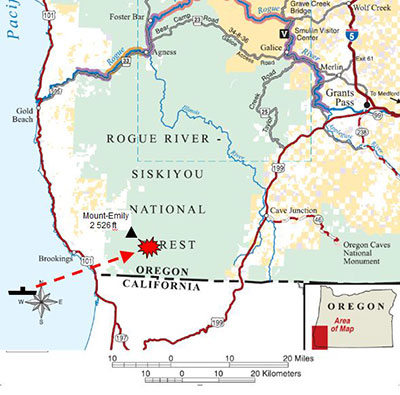 On September 9, 1942, the submarine surfaced about 20 miles off the coast of Brookings, Oregon. The crew assembled the floatplane and Fujita and Petty Officer Okunda Shoji launched into the air. Their target was not Brookings but rather the forested area of the Pacific Northwest. Rather than fly the lightweight aircraft against heavy defenses that normally defended populated cities and industrial areas, the Japanese leaders would have Fujita attempt to create large forest fires using the plane’s incendiary bombs to frighten the American people through psychological warfare.

The Glen crossed the shoreline and turned northeast. It flew around Mount Emily, which was 5 miles inland, and dropped both bombs. Due to a wet summer and the misty morning, the ground was a little damp so the incendiary bombs exploded on the ground but did not produce the fire damage the Japanese expected. In fact, had it not been for some bomb fragments and a little impact crater, the damage looked more like a lightning strike. Fire spotters in forest service towers spotted the little plane and smoke from the fire. They reported their aircraft sighting and went to the location of the smoke. The fire had quickly extinguished itself.

A couple of weeks later on September 29, Fujita tried again about 50 miles north near Port Orford. This also failed to produce the large forest fire as the flames quickly burned out in the damp forest. This would be the last manned flight attack against the United States. Fujita would eventually return to reconnaissance flights across the Pacific and in 1944 was transferred to train Kamikaze pilots.

In 1962, Fujita would be invited to visit Brookings, Oregon as a guest. He would use this time to apologize for his actions in WWII and gifted the town with his family’s 400-year-old katana sword. He built a relationship with the residents there as he returned multiple times. Eventually, he was made an honorary resident of Brookings shortly before he died.