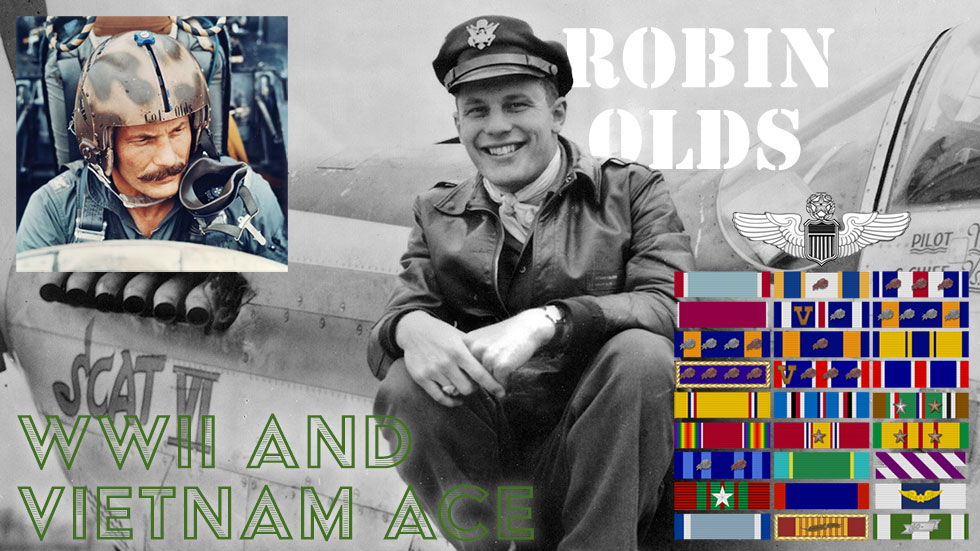 It is August 23, 1944, and a flight of American P-38 Lightning is escorting a bomber group above the German countryside. They are cruising at 28,000 feet when about forty German Messerschmitt Bf 109s are spotted far off on the flight’s left. The Germans are unaware of the Americans. A P-38 flight leader named Captain Robin Olds points his flight toward the 109s and begins a long climb to approach the unknowing Germans from above and behind.

He and his wingman drop their fuel tanks and begin their run. As Olds begins to fire, he realizes his engines have died because he is out of fuel. He had forgotten to switch from external to internal fuel when the tanks were jettisoned. He presses his attack while flying dead stick and makes a strafing pass, fatally striking a Bf 109. He banks away and restarts his engines. Before he lands back at his base that day, the 22-year-old Captain Olds would shoot down two more, making him the first Ace of the 479th Fighter Group. He would acquire 5 more in the P-38 before his unit transitioned to the P-51 Mustang. By the end of World War II, between the P-38 and the P-51, Olds would record a total of 12 kills in the air and 11 aircraft destroyed on the ground.

Before his service in WWII, Robin Olds attended West Point Military Academy. He played on the school’s football team and was an All-American tackle. In 1985, he would be inducted into the College Football Hall of Fame.

After WWII, he would become a member of the first P-80 Shooting Star demonstration team, flying the United States’ first jet fighter to perform aerial events across the country. He would also be assigned to command a couple of flying squadrons and wing units. He tried desperately to be sent to the fight in Korea but was unsuccessful.

In Vietnam, he would get his wish to get back into the fight. His service during this time would also make him a legend.

The 8th Tactical Fighter Wing, also known as the Wolfpack, was stationed in Thailand at the Ubon Royal Thai Air Force Base. The 8th TFW was struggling. They needed to be more successful against the North Vietnamese MiG-21s, which were wreaking havoc with heat seeker bombs attacking F-105 Thunderchief bombers from the rear. From April to September of 1966, the Wolfpack had lost 18 F-4 Phantoms and 21 pilots were dead or missing. The pilots were tired and low on morale. They had little respect for their commanders, who very seldom flew themselves. The 8th TFW was in need of a new leader as much as Olds was in need of an aerial combat unit to lead.

In September of 1966, the United States Air Force’s 8th Tactical Fighter Wing would get their new commander. The young pilots were skeptical of then Colonel Robin Olds, who was nearly double their age. When he arrived he assembled all his pilots in the main briefing room and introduced himself as ‘the new guy’ who would fly at the back of the formation and expect to be trained by these young pilots. Within a couple of weeks, Olds was leading the formations and had earned the respect of the wing through his abilities in the F-4.

Olds would change up the 8th TFW tactics. The 8th had been flying the same mission routes at the same time with the same tactics day in and out, leaving them vulnerable to the MiGs. Olds would make the Wolfpack unpredictable and much more successful. The F-105s were armed with electronic jamming equipment that kept them much safer from the North’s surface-to-air missiles (SAMs). The MiGs would avoid a fight with an F-4 Phantom and preferred to wait to attack the F-105s, which they could identify because of the electronic countermeasures signature picked up by the North’s anti-aircraft radar systems.

With that information, Colonel Robin Olds began planning the operation that would make him a legend. He needed something to get those MiG-21s to come up and fight his F-4s.

He would devise a mission called Operation Bolo that would see those electronic countermeasures (ECM) pods from the F-105s placed on the F-4s. The ECMs would make the F-4 look like an F-105 on their radar systems. Further, his fighter jets flight would use call signs like a flight of the F-105 bombers. Then the mission would follow the same direction, path, and timing of the F-105 bombers that the North Vietnamese were used to seeing.

When the operation commenced, at first Olds was not sure the North Vietnamese were taking the bait. Then one lone MiG-21 popped out of the clouds. Quickly it would be followed by a couple more until it seemed all the MiGs in North Vietnam were in the sky against the F-4 Phantoms. Before the aerial battle was over, Old’s Wolfpack was credited with seven MiG-21 killed and two others probable. This was over half of the MiGs the North had. The Americans did not lose even one F-4 Phantom. If you want to read the play by play of that air-to-air battle, you can find it over halfway down HistoryNet’s web page on “The Bad Boy Commander of Operation Bolo.”

Olds is credited with four aerial victories in Vietnam but likely had more. He was told if he became an ACE (five victories) he would lose his command and be sent back home, so there were other victories likely not reported. He would leave the 8th in September of 1967, promoted to Brigadier General, and assigned as the Commandant of Cadets at the United States Air Force.

His awards are remarkable in both prestige and number. Brigadier General Ronald Olds has been awarded an Air Force Cross, two Air Force Distinguished Service Medals, four Silver Stars, six Distinguished Flying Crosses, and 40 Air Medals – that only includes the awards for valor and bravery from his own United States. He even has a Distinguished Flying Cross from the United Kingdom that he earned during World War II. He is a triple ace with a total of 16 enemy aircraft shot down between World War II and the Vietnam War.

The F-4 Phantom that the Wolfpack flew were very formidable adversaries for the MiG-21 in Vietnam. Two crew members occupy the two-seater F-4, a pilot and a Weapons Systems Officer or Radar Intercept Officer (RIO). Thrusting the Phantom through the air were two GE J79-GE-17A after-burning turbojet engines. Each turbojet provided 17,845 lbf with afterburner. This propelled the F-4 to a maximum speed of Mach 2.23 at 1,473 mph at 40,000 ft. With a combat range of 423 miles and nine external hardpoints, the F-4 could bring 18,650 lbs of weapons to a fight very quickly. Though it did not initially have an internal cannon, it was able to deliver air-to-air missiles, air-to-ground missiles, and many different bombs. Later models would eventually include the M61 Vulcan rotary cannon.

Also read: F-4 Phantom – From the Beginning of Its Life Cycle

With aging aircraft like the F-4 Phantom, keeping the airframes mission-ready requires identifying reliable, cost-effective component lifecycle solutions for electronic, mechanical, and electromechanical systems. Even with tight funding, the F-4’s electronic systems like the AN/APX-100 Identifying Friend or Foe (IFF) Transponder pictured here, as well as the aircraft’s other radar, communication equipment, and weapons systems must be maintained to ensure mission-critical components are ready to keep those fighters in the air.