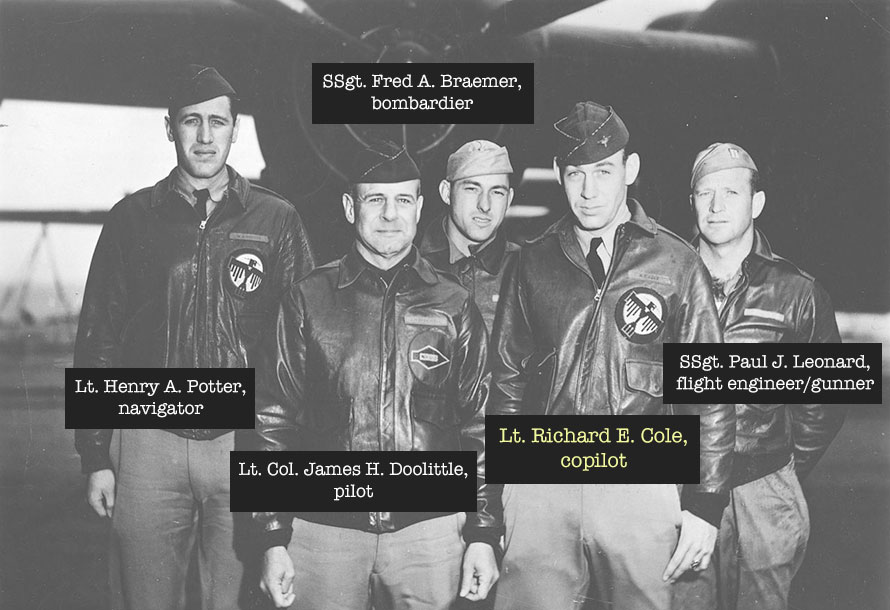 April 18, 1942 – 1 ship, 16 bombers, 80 volunteers, 650 nautical miles, 1 target, and 2 goals – boost morale in the U.S. and attack Japan just months after the attack on Pearl Harbor. Even though this highly classified mission only caused minor damage, the daring daytime raid on several mainland cities let them know their Japanese homeland was vulnerable to attack.

After bombing Japan, the flight was supposed to go on to China to prepared airfields that awaited them. Their aircraft would be low on fuel and everyone knew this mission was a one-way ticket. Some of the men of the Doolittle Raid were killed bailing out of their aircraft or captured/killed by the Japanese in China. After they bailed out of their B-25 Mitchell Bombers, Doolittle’s crew all made it back together and eventually home.

The last surviving member of the Doolittle Raid, Retired Lt. Col. Dick Cole, passed away on April 9, 2019 at the age of 103 years old. Cole was Doolittle’s co-pilot in the bomber that led the raid. Following the raid, Cole continued to fly transport aircraft across the Himalayas during World War II. He would retire a lieutenant colonel from the Air Force in 1967.

He will be buried at Arlington National Cemetery. Cole is survived by his daughter, Cindy Cole Chal, and his son, Richard.

Other Results of the Raid

The successful raid also resulted in Japan’s decision to attack an American base at Midway Island, where they believed the flight originated. The Americans had broken the Japanese codes and were waiting on their fleet to arrive. The U.S. attacked the Japanese fleet, sinking four of their fleet carriers and a heavy cruiser, destroying 248 aircraft and thousands of Japanese were killed and captured. This dealt the Japanese a major defeat, causing irreparable damage to the Japanese ability to wage war at sea and turning the tide of the war in the Pacific in the United States’ favor.

Learn even more about this daring adventure and Lt. Col. Dick Cole

Dick Cole, last of the Doolittle Raiders, dies at 103