D-Day June 6, 1944 and The Aircraft Supporting of Operation Overlord

It’s the early morning of June 6, 1944. The mixture of ocean salt water and diesel fill the air as soldiers heavy with rifles, ammunition, and packs carefully climb down rope nets hung from the sides of troop ships. Below them are landing craft called Higgins LCM-3. These boats rise and fall in the waves below, awaiting their precious cargo to climb inside. As they clammer aboard, bodies are pressed back against each other, chest to rucksack, as more and more men climb down the nets. 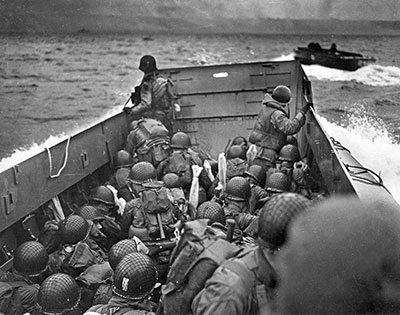 American servicemen in a LCM-3 Higgins boat during the D-Day invasion. ~ The Associated press

The minutes from ship to shore seem like hours as the men contemplate what is waiting for them. Omaha and Utah Beaches lay ahead of their landing craft. With head high hulls and a steel ramp surrounding them, the only thing the men can see is the rucksack of the man in front of them. They know time is near as they get closer to the shoreline and the Higgins boat rocks under their feet through the waves. They hear the sounds of rounds snapping over their heads and bouncing off the steel ramp. They feel the salty spray from plumes of water geysers where shells land near the little landing craft. Suddenly, the men slam against each other as they feel the boat lurch upward and slam back into the surf from a direct hit. A few look back to see where the craft’s boatswain once sat is now just a hole. The craft is still powering forward as it slides against the sand. The sound of gunfire grows more intense against the ramp. The steel shield disappears from their view, no longer protecting them from tens of thousands of German soldiers who spray the beach with automatic gunfire, determined to push the Allied troops back into the sea. All the men can do at this point is run forward into the fire – into history.

This is Operation Overlord and on June 4, 1944, 74 years ago today, an amphibious assault force consisting of more than 5,000 vessels begins to launch more than 150,000 Allied troops across a 50-mile coastline of beaches in Normandy. Their goal was to gain a foothold on those beaches and the surrounding fields and towns so the Americans, British, Canadians and other Allied countries could build stronger landing zones for more troops, equipment, and supplies to be brought ashore. This is the beginning of taking France and the rest of Europe back from Hitler and the Axis Powers.

The Normandy Landings of Operation Overlord is the true story of the troops who launched from the sea to the shores of France in a pillbox to pillbox fight for freedom.

On D-Day, June 6, 1944 those killed, wounded, or missing in action on the allied side is estimated to be:

The number of Allied troops that landed at the individual beaches were:

The number of men killed at the individual beaches were:

There is also Operation Neptune – the airborne operations of Operation Overlord where 24,000 airborne assault troops were inserted behind the German lines by parachute and glider. The task of the airborne forces was to support the landings by denying the enemy of supplies and reinforcements.

Supporting Operation Overlord were more than 11,000 planes. Above the chaos on the beach, these airmen provided air cover and strafed reinforced concrete strongholds. Through the smoke-filled gray skies flew P-51 Mustangs, P-47 Thunderbolts, Supermarine Spitfires, and Hawker Hurricanes. Behind the lines cutting off supplies and reinforcements by attacking trains, convoys and factories flew bombers like A20 Havocs, B-26 Marauders, Avro Lancasters, and P-38 Lightnings. Transporting and dropping airborne assault troops behind the Germans before the beach landings were C-47 Dakotas. Carrying soldiers inland to attack the German’s flanks were British and American glider aircraft like the CG-5 Hadrin and A.S. 51 Horsas.

To ensure the Allied aircraft were not targeted by friendly-fire in all the chaos of war, the allies painted stripes on the plane’s wings. This was kept secret and only revealed to the troops who would take part a couple days ahead of the first waves. A flyover was scheduled to familiarize allied forces with the markings.

We salute the men who 74 years ago sprinted across the deadly beaches of Normandy to begin the difficult fight of ending Germany’s occupation of Europe. These men are the heroes of the Greatest Generation who fought in World War II.

Watch a Youtube video of Steven Spielberg’s powerful, realistic re-creation of WWII’s D-day invasion. Warning: This video contains graphic content and may be upsetting to some Viewers.