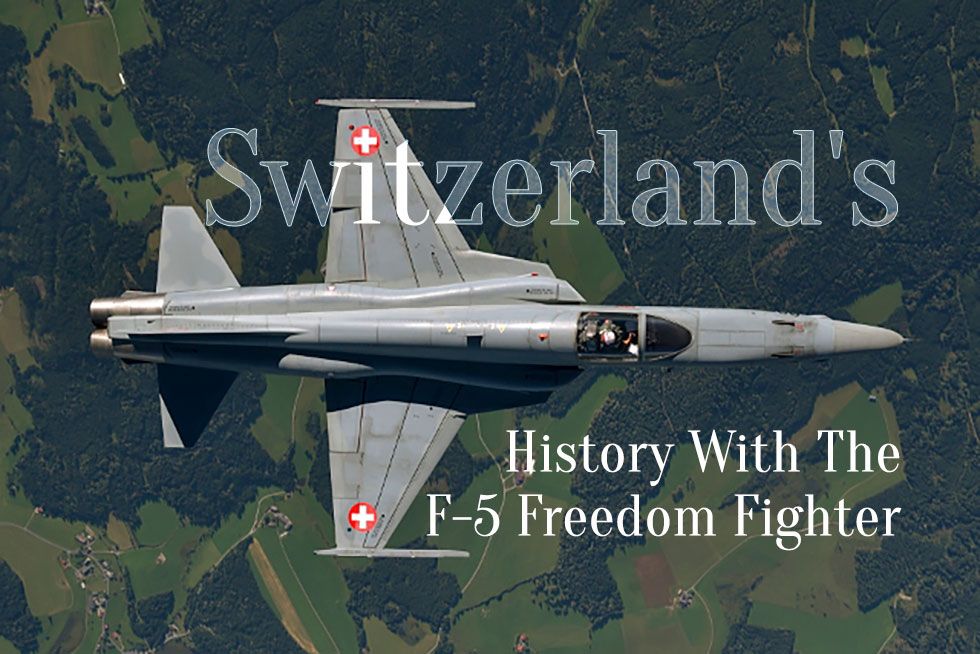 The single-seat, supersonic light fighter F-5 has been in service since 1964 with the United States Air Force. This agile, reliable jet provided great engine performance to its user with low operational costs. Its service life began as the F-5A (single-seat) and F-5B (two-seat) Freedom Fighter. Its overall size was much smaller than the powerful F-4 Phantom that was in service at that time. This lightweight fighter’s compact body was wrapped tightly around two powerful turbojet engines that each produced 22.2kN of thrust. The F-5 was built for speed and agility with a top speed of 1,056 mph and a climb rate of 574 fps. Despite the obvious advantage of speed, the originally F-5A and F-5B did not have a radar system. These simple but nimble fighters were produced for the United States and its allies through 1972.

But in 1972, the F-5 received numerous upgrades and a name change from Freedom Fighter to the Tiger II. This new version would be designated the F-5E (single-seat) and F-5F (two-seat). The upgrades include more powerful engines, higher fuel capacity, greater wingspan area, a better rate of turn, an option to receive air-to-air refueling, and finally an air-to-air radar system (AN/APQ-153 & AN/APQ-159). In the United States, the Tiger II is still in operational status as an aggressor aircraft to fly against U.S. fighters to train military pilots.

More than just the United States, the F-5 Tiger II has served as a primary fighter for eleven other countries. Many, like the Swiss Air Force, are still flying the F-5 as one of their main weapons.

In the late 1960s, the Swiss Air Force was on the hunt for their new fighter aircraft to replace their inventory of Hawker Hunters, De Havilland Venoms, and DH Vampires. Their replacement program found likely solutions in the A-7G Corsair II and the Fiat G-91Y but both would be too costly. Through an evaluation of many different aircraft like the F-4E Phantom, Mirage F-1, and A-4N Skyhawk, the Swiss decided on the F-5E. This was due to the Tiger II’s cost and ease of maintenance. In 1975, they ordered 66 F-5Es and 6 F-5F fighters. 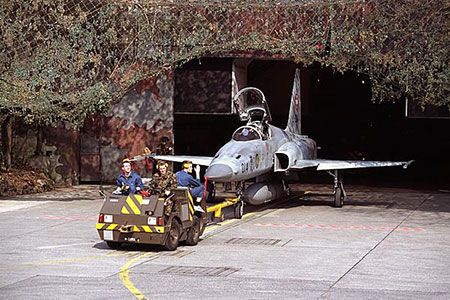 The Swiss arm their F-5 with two AIM-9P Sidewinder missiles and two 20mm cannons. The radar system is the AN/APG-69, and for communications a single VHF and UHF radio. In 2000, the radios would be upgraded to Have Quick I radios to make them compatible with the country’s fleet of F-18 Hornets. The Swiss have mountain caverns that serve as hangars and can house a 12-aircraft squadron.

In 2010, they announced that they would be replacing the Tiger IIs as they are approaching the end of their operational life. Some of their F-5 fleet has been sold or leased to other countries. The U.S. Navy purchased 22 of the Swiss F-5 to be used for Navy and Marine Corps aggressor units. As of 2020, the Swiss still have 29 F-5E Tiger II in service. Six of those are flown by the Swiss’ aerobatic demonstration team.

Duotech Services – A qualified Depot Level Maintenance (D-Level) facility can eliminate the need to scrap repairable equipment by identifying the faults in malfunctioning equipment and repairing them quickly. With aging equipment, supporting technical data can be nonexistent, stopping repairs in their tracks. Finding a qualified depot that has the ability to reverse engineer obsolete technology and manufacture unavailable parts is essential to returning functional mission-critical systems back to aircraft and ground systems.