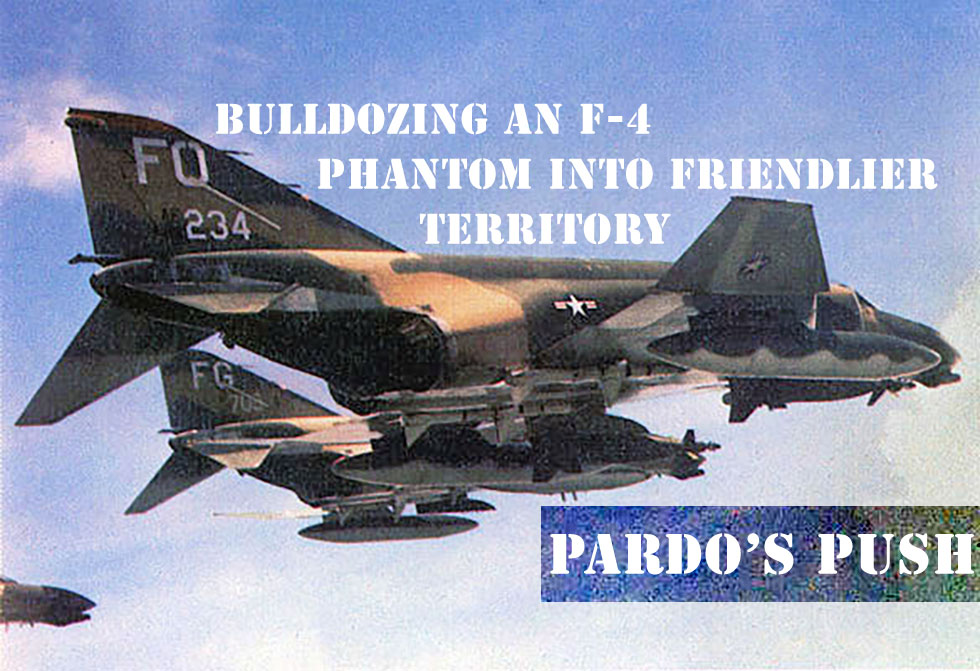 It was a clear blue sky over North Vietnam on March 10, 1967, when a large strike force of 72 aircraft was tasked with attacking the iron and steelworks at Thai Nguyen. The steel mill was 35 miles north of Hanoi, one of the most defended locations in the North. Because the mill was the only plant in North Korea capable of producing steel, the area around the steel mill itself was also heavily fortified with anti-aircraft weapons. The town was ringed with 96 anti-aircraft artillery (AAA) sites, SA-2 SAMs, and nearby was North Vietnam’s main fighter base.
The 72 aircraft included F-105 Thunderchief Bombers, which had electronic countermeasures to suppress the SAMs, and F-4s, which would provide escort for the F-105s. The first strike group would include the F-4s, which would troll the SAM sites. The goal was to get the SAMs to turn on their radar to track the F-105s. When they did, the Thunderchiefs would then home in on the radar signal and fire an antiradiation missile, which would then follow the signal back to the radar.

The anti-aircraft artillery (AAA) was the thickest the American pilots had seen during all their missions. The first flight of F-105s and F-4 Phantoms were all struck by AAA. The lead F-105, call sign Lincoln 01, piloted by Major David A. Everson and his electronic warfare officer (EWO) Capt. Donald A. Luna, was hit after firing their first missile at a SAM. The two were forced to eject from their stricken aircraft and were immediately captured on the ground. They were held as Prisoners of War (POW) for the remainder of the war, 2,184 days. The other three F-105s were also heavily damaged in this first flight. One F-105 pilot of this same flight, Merlyn Hans Dethlefsen, Lincoln 03, was awarded the Medal of Honor for his attacks on the SAM sights after Lincoln 01 was shot down.

However, this article is about two of the F-4 Phantoms of that first flight. One was piloted by Captain Bob Pardo and the other by his wingman Captain Earl Aman. Escorting the F-105s into the target area, both F-4s were struck by AAA flack, but Aman’s aircraft was in much worse condition. His aircraft was streaming fuel and left the fight knowing he did not have enough remaining to make it to safer territory. Pardo’s plane was also hit, and though not quite as bad, he did not expect to have enough fuel to make it to the refueling aircraft so he could return to base.

Also read: F-4 Phantom – From the Beginning of Its Life Cycle

Shortly after they turned to make their run to Thailand, Aman’s engines flamed out and it was evident that he and his EWO would need to eject over enemy territory in North Vietnam. Pardo knew that if they could reach Laos airspace before ejecting, they would have a better chance of rescue. Pardo decided to help his wingman get as close to home as possible with a crazy idea that just might work – he would attempt to push Aman’s aircraft with his own stricken F-4.

Pardo’s first attempt was to put the nose of his aircraft into the section of Aman’s F-4 that stored the tail parachute. Aman jettisoned his tail parachute and Pardo gently connected but the turbulence was too much and risked both planes crashing. His second attempt was to use Aman’s tailhook on the bottom of his F-4. Pardo eased his windshield canopy up to Aman’s tailhook, increase power to the engines, and provided some lift, extending their flight. He had to reposition every twenty seconds because the tailhook continued to slide off the F-4s canopy.

Shortly into this maneuver, one of Pardo’s engines caught fire from the damage it had received. He broke away from Aman long enough to kill that engine and then moved back to resume the push. For ten minutes, Pardo used one engine on his aircraft to slow the descent of both. Pardo also ran out of fuel helping his wingman, but they both managed to reach Laotian airspace.

Pardo’s Push, as the feat was widely known, lasted 20 minutes and moved both aircraft 80 miles closer to Thailand. This put them all in a position to eject with the chance for a safer rescue. On the ground, all four men evaded capture from those hunting them and were extracted by rescue helicopters.

The next day, they were back at it, attacking the same steel mill from the day before.

Enjoy this #JetFriday video below by AVweb that describes the Pardo’s Push and have a great Friday! See all our Jet Friday posts. If you enjoy it, please share it with friends and colleagues.