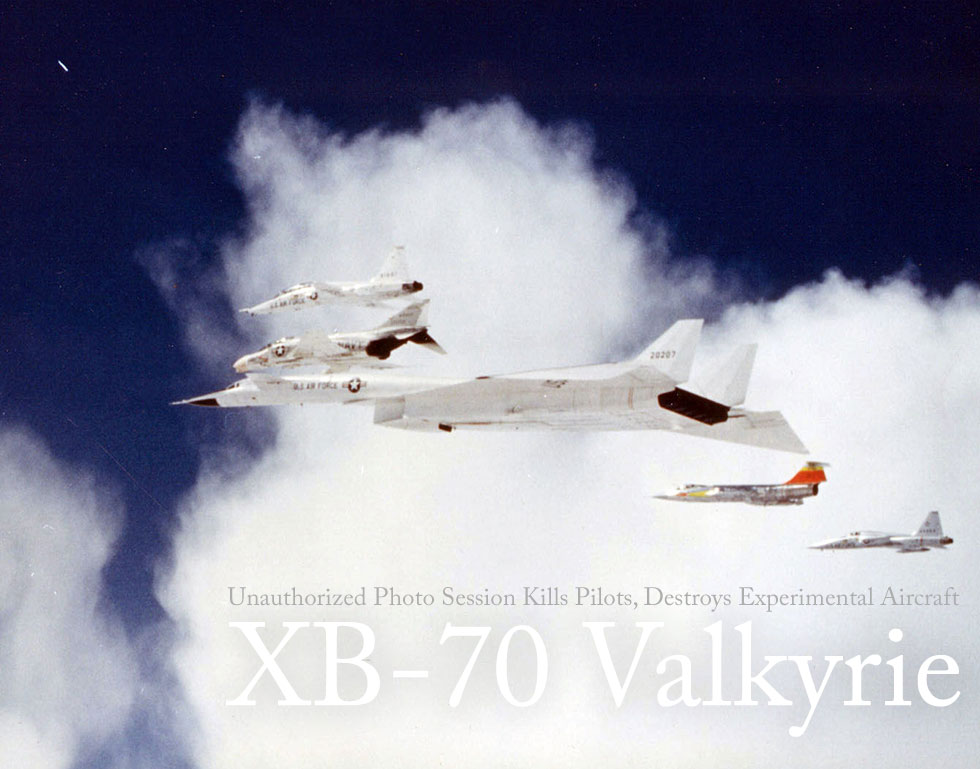 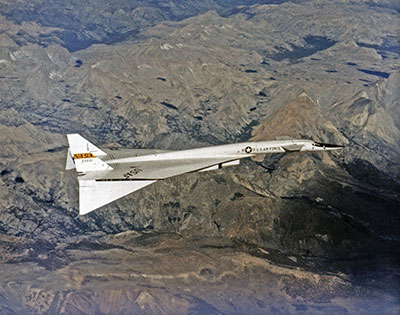 The XB-70 Valkyrie was the largest and fastest strategic bomber the United States ever built. It was designed to exceed Mach 3, or over 2301 mph, and had a service ceiling over 77,000 feet. It performed these speeds and reached these altitudes using six General Electric afterburner turbojet engines, each producing 30,000 lbf of thrust.

The 1950s concept XB-70 would need this extreme speed and altitude to avoid the anti-aircraft systems of its time and escape fighter jets sent up to intercept it. To give it enough fuel to power the big six turbojet engines and accomplish its extremely long missions, engineers even proposed putting a nuclear reactor in this aircraft.

If this behemoth got past testing and entered into service, it would become the B-70 Valkyrie. There were two test aircraft ordered for testing. Its first flight was on September 21, 1964. The two prototypes flew many test flights.

But by the time this strategic bomber made it through testing, Soviet surface-to-air missiles had become more effective at shooting down high flying aircraft like the Valkyrie. Also, by the late 1950s, intercontinental ballistic missiles (ICBMs) made manned nuclear bombers unnecessary. So by the time the XB-70 was to enter into service, it was already obsolete. It never went into production, which is a good thing because even in the 1960s, the Valkyrie program cost was $1.5 billion. Though the program never took off, the test flights would set the standard for high-speed, high altitude flight systems that would later benefit other aircraft like the SR-71 Blackbird and B-1B bomber.

On a beautiful day in June 1966 over the California desert near Barstow, one of the two test aircraft would take part in a photo session that would end in tragedy. The manufacturer of those six turbojet engines, General Electric, wanted to take some promotional photos. Along with the Valkyrie, a flight made up of an F-4 Phantom, an F-5 TIger II, a T-38 Talon, and an F-104 Starfighter would fly a V-formation. They all had at least one thing in common – they all were powered by GE engines. 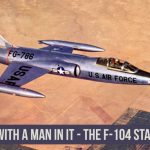 Also read: Missile With a Man In It – the F-104 Starfighter

To get all the photos they needed, the General Electric officials shot film from a chase plane for nearly an hour in the tight V formation. At the end of the long flight, the F-104 Starfighter piloted by test pilot Joseph A. Walker struck the right-wing of the XB-70, pitched over and severed off both verticle stabilizers of the XB-70, before exploding into the left-wing, killing Walker immediately. The XB-70 was so large that its two pilots, Al White and Carl Cross, did not even feel the impact. With the verticle stabilizers missing and damage to the wings, the XB-70 began to lose control in an unrecoverable flat spin. Al White managed to eject in the escape pod but Carl Cross did not and died in the crash. The video below explains in further detail what led up to the horrible crash that claimed the lives of two very experienced pilots.

The surviving prototype is now housed in a Dayton, Ohio museum. The photo op not only cost lives and expensive aircraft but also ended a few high ranking Air Force official’s careers because USAF had never authorized the photo op.