Aging Refueler Could Reach Century Mark Before Retiring From Service 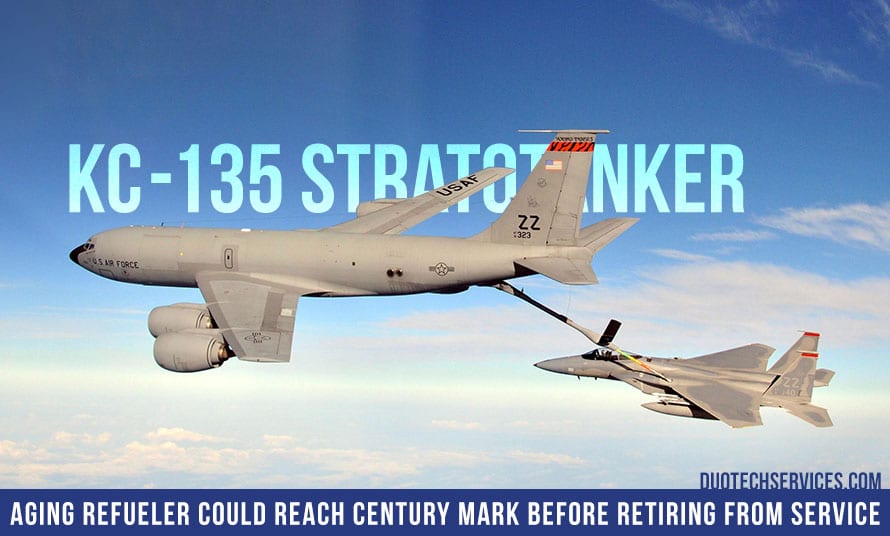 The combat radius is the distance an aircraft can fly to enter air combat, stay, fight and return to base. When supporting the troops on the ground by controlling the airspace or providing close-air-support, the longer the time an air asset can remain nearby for support the better. 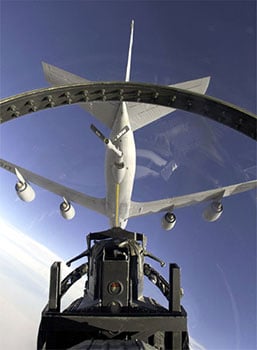 Multi-role fighter aircraft like the F-16 Fighting Falcon has a combat radius of about 534 miles while the F-18 Super Hornet has a 449 mile combat radius. Though it can be stationed very near the front lines, the A-10 Thunderbolt II, a close-air support focused aircraft, can loiter over a battlefield for extended amounts of time. But if a commander wants to keep these aircraft on station even longer than their standard capabilities then these aircraft need to be refueled in the air by an air tanker.

Even the E-3 Sentry AWACS, an air platform that provides the commander an ability to control all assets on or above the battlefield, can only spend about 8 hours flying without needing to refuel. Like the other aircraft, the E-3 can greatly increase its range by visiting an aerial refueler.

What is an aerial refueling tanker

An air tanker aircraft allows another aircraft to be refueled in the air. In-flight refueling (IFR) is the process where aviation fuel from one military aircraft is transferred to another during flight.
Comparing U.S. Military Refueling Tanker Aircraft

One of the oldest military aerial refueling aircraft is the KC-135. Introduced into service in 1957, this plane is flown primarily by the Air Forces of the United States, Chile, France, Turkey, Saudi Arabia, and Singapore. Capable of carrying 200,000 lb of fuel, the Stratotanker can refuel aircraft using either a flying boom or its shuttle-cock drogue.

The KC-135 is modified from the civilian Boeing 707 airliner. It looks similar to the 707, but the KC-135 is shorter and has a narrower fuselage. Between 1956 and the final Stratotanker delivered to the U.S. Air Force in 1965, there were 803 produced. Currently, the USAF inventory includes 153 in active duty service and 243 between both the Air National Guard and the Air Force Reserve. 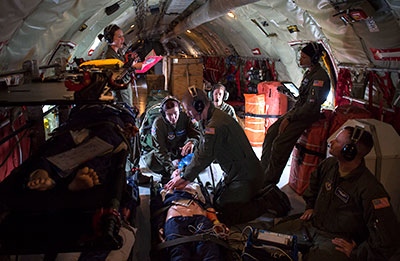 Airmen of the 86th Aeromedical Evacuation Squadron perform lifesaving procedures to a patient in a KC-135 Stratotanker, at Ramstein Air Base, Germany, March 26, 2015.

The KC-135 is crewed by three personnel, a pilot, co-pilot, and the boom operator. Beside its refueling mission, the KC-135 can also serve as a platform for command post missions and reconnaissance. During a medical evacuation transport mission, the KC-135 also carries an additional crew of two flight nurses and three medical technicians. When needed to provide personnel transport, it has the capability of carrying 37 passengers.

To perform as primary mission as a refueler, the KC-135 Stratotanker is powered by four CFM International Turbofans that produce 21,634 lbf of thrust each. Its cruising speed is 530 mph when carrying 150,000 lb of transfer fuel. The service ceiling is 50,000 ft and rate of climb 4,900 ft per minute.

Beginning with the Vietnam War, the KC-135 has refueled U.S. and allied aircraft during every conflict and war since. With the Stratotanker’s introduction into service in 1957, like the large B-52 Stratofortress which was introduced in 1955, the KC-135 is one of the oldest aircraft still flying in the U.S. Air Force.

Record Setting Mission With The Help of Refuelers

The B-52 Stratofortress, a USAF long-range strategic bomber, set a record for longest-distance combat mission using refueling tankers like the KC-135 and the KC-10. Providing the opening strike for Desert Storm in January 1991, a flight of seven B-52s launched from Louisiana and flew a round trip to Iraq, launched thirty-five cruise missiles, and returned to their base at Barksdale Air Force Base for a total of 35 hours and 14,000 miles. To accomplish this mission, the B-52s would link up with refuelers multiple times.

The KC-135 is expected to be replaced by the KC-46 Pegasus. It is due to be retired in 2040, which will put the KC-135 at over 80 years old at that time. With production issues that have caused long delays and the cost overruns of the KC-46, the KC-135 could reach the century mark like the Stratofortress. 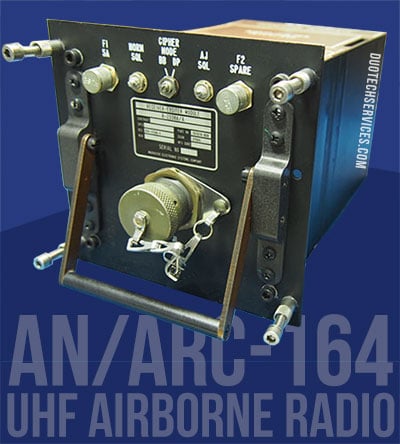 The success of refueling various military assets near a combat environment depends heavily on the ability of the KC-135 to securely communicate with the aircraft needing refueling. This is accomplished using encrypted radios like the AN/ARC-164. This radio is an airborne UHF communication system that utilized Have Quick operation. It is one of the most common avionics radios for the U.S. Air Force and U.S. Army.

In order to defeat enemy frequency jamming, radios using Have Quick operation like the ARC-164 will frequency hop, switching both the transmitter and receiver simultaneously to a different frequency, many times per second. The AN/ARC-164 allows for communication between friendly aircraft with other radios that use Have Quick operations. This requires both radios to have the same Word of Day (WOD), Time of Day (TOD), and the Have Quick Net Number to allow for seamless syncing during frequency hopping.

The AN/ARC-164 is installed on fixed-wing aircraft like the KC-135, C-130, A-10, F-16 and rotary wing aircraft like the UH-1D, CH-47, H-60. They are even used in maritime applications. Having the AN/ARC-164 encrypted radio to connect multiple aircraft assets to coordinate refueling operations, despite the enemy’s attempt to thwart the connection, is essential to saving lives and winning battles. Also read: Why Communicating on the Battlefield Using Encryption Is Essential to Survival 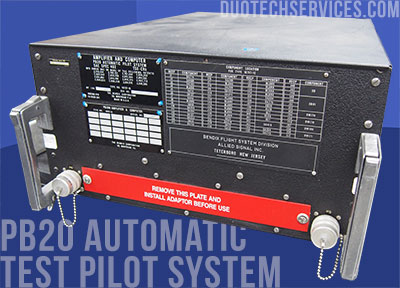 The Amplifier and Computer of the PB20 Automatic Pilot System

The KC-135, like the Boeing 707 and 720 as well as the E-3 Sentry was also originally equipped with the PB-20 autopilot. Once the system has its commands, the PB-20 can maintain an aircraft’s selected heading and stabilize the pitch, yaw, and roll attitude. The PB-20 can also control the aircraft’s climbing and descending. Other features that can be added are Mach control, proximity warning, and flight-director functions. The PB-20 can do almost everything a pilot can do. Also read: Aircraft Autopilot Means Hands Off Flying, Not Pilot Sleeping

A qualified Depot Level Maintenance (D-Level) facility can eliminate the need to scrap repairable equipment by identifying the faults in malfunctioning equipment and repairing them quickly. With aging equipment, supporting technical data can be nonexistent, stopping repairs in their tracks. Finding a qualified depot that has the ability to reverse engineer obsolete technology and remanufacture unavailable parts is essential to returning functional mission-critical systems back to aircraft and ground systems.