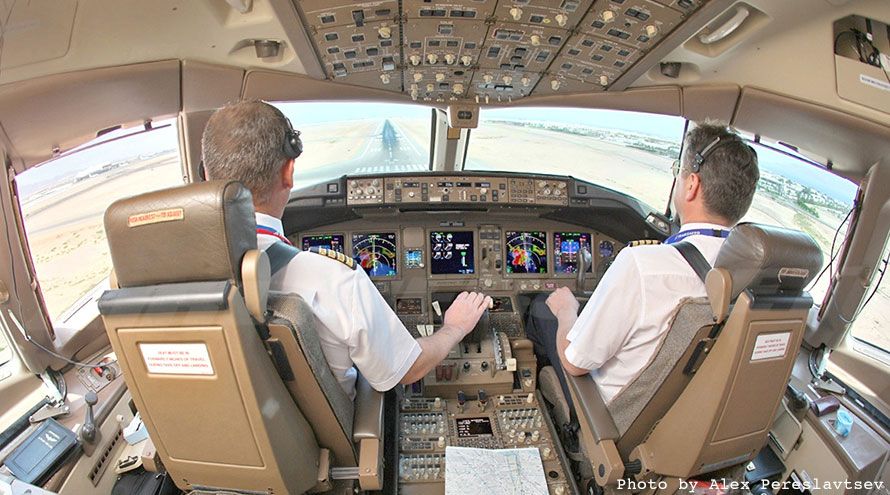 It’s a crisp, early Sunday morning and a Delta Boeing 777 is lined up on the runway. Final checks are made and the pilots advances the throttles, making the wheels creep forward from a crawl ultimately to take-off speed. The pilot pulls back on the yoke and the big passenger jet lifts off from Atlanta Hartsfield-Jackson into the early morning light. Just off the ground, the pilot retracts the landing gear, lifts the flaps, and continues to climb with hands on the controls. This is the beginning of an eight hour flight to London. Also read: Command and Control of the Battlespace from Above With The E-3 Sentry (click image)

Once the pilot reaches the planned cruising altitude, he engages the autopilot. For most of the remainder of the flight, the autopilot follows the predetermined route point A to B to C. The pilot busies himself and the copilot with monitoring the flight systems, air traffic control, the weather radars, possibly going over emergency procedures, and so much more. The autopilot, also known as autoflight systems, follows the predetermined route, keeping the wings level and the aircraft at the exact speed and elevation. The pilot provides input adjustments to the autoflight system controls as dictated by air traffic control and the plane responds accordingly. This is the most efficient way to operate the aircraft when there are not other circumstances like bad weather requiring the pilot to go “hands-on”.

From a single pilot manning a glider over sand dunes in North Carolina to today’s multi-person crew and 300-plus passenger airliners carrying travelers around the globe, the aircraft has connected the world. As more technology is introduced into the cockpit, aircraft will fly more efficiently and safely. This doesn’t mean the pilot initiates auto-pilot and then goes to sleep. It just reduces the workload on the pilot so he and his crew can focus more on everything happening inside and outside the aircraft. The first production Boeing 707 is rolled out of the final assembly plant at Renton, Washington, 28 October 1957. (Seattle Post-Intelligencer) Click Picture

On 28 October 1957 the first production Boeing 707 rolled off the assembly line and performed its first flight on December 20, 1957. This aircraft was the first commercially successful jet airliner and ushered in the jet age of passenger airlines. It had four Pratt & Whitney power plants and could carry around 110 passengers when it first released and a maximum of 189 after later modifications. The aircraft had a crew of three except when flying over water when they carried four, adding a navigator.

More than just a passenger airliner, the 707 development led to other variants for civilian and military purposes. The military based Boeing E-3 Sentry is an airborne warning and control system, also known as AWACS, that provides surveillance, command, control, and communications in all-weather conditions. The E-3 platform is based on the Boeing 707.

One of the most popular military aerial refueling aircraft, the KC-135 Stratotanker was also developed around the 707 design. It was the first jet-powered refueler for USAF. Though developed to refuel strategic bombers, the KC-135 is used extensively to extend the range of fighter aircraft.

Boeing’s 707 and 720 as well as the E-3 Sentry and KC-135 Stratotanker were originally equipped with the PB-20 autopilot. Once the system has its commands, the PB-20 can maintain an aircraft’s selected heading and stabilize the pitch, yaw, and roll attitude. The PB-20 can also control the aircraft’s climbing and descending. Other features that can be added are Mach control, proximity warning and flight-director functions. The PB-20 can do almost everything a pilot can do. The Amplifier and Computer of the PB20 Automatic Pilot System

The PB-20 has no vacuum tubes, but is a transistorized flight monitor that uses card amplifiers. It has integration control, audio-aid coupling, and its amplifiers and electromechanical computers are basic “building blocks” designed for adapting the system to each individual aircraft requirement.

Since its inventor, Lawrence Sperry, successfully demonstrated the first autopilot across France in 1914, autoflight systems have been reducing workloads on pilots so they can maintain focus on all aspects of the aircraft. Autopilot systems are so precise that they also allow air traffic controllers to stack many aircraft into multiple flying lanes through busy flight corridors safely and efficiently. Some newer autopilots can not only maintain programmed altitudes and direction but can also perform takeoffs and landings and apply brakes.

As the Delta flight nears the airspace in London, the pilot maintains awareness of what the autopilot is and isn’t doing. They are also busy with monitoring the aircraft’s systems, communicating with ATC, and making input adjustments to the flight controls. The pilot is still flying the aircraft, just through automation. If the landing is handled by the autopilot, the pilot maintains awareness, ready to take over if something unusual happens. After a long, quiet eight hour trip where the autopilot was engaged nearly the entire trip, the flight lands safely at London’s Heathrow Airport.

Duotech maintains electronics, avionics, and communications components for aircraft like the E-3 Sentry, P-3 Orion, C-130 Hercules, and even fighter aircraft like the F-5 Tiger II, F-15 Eagle, and F-16 Falcon, like the PB-20E Amplifier/Computer (NSN: 6615010135966) shown above. Even with tight funding, systems like legacy autoflight systems must be maintained to ensure mission critical components are ready to keep those aircraft in the air.

Duotech provides repair support capabilities for base stations, antennas, radar, towers for communications and RF, and also electromechanical and power electronics for ground-based systems. With over 34 years of experience, DSI provides a full range of equipment repair services. We provide Depot Repair Services for a wide variety of electronic and electromechanical systems for military and commercial applications. We are certified AS9100D and ISO 9001.

Also read: Command and Control of the Battlespace from Above With The E-3 Sentry (click image)