From Prowl to Growl: The Last Squadron of the EA-6Bs is Deactivated 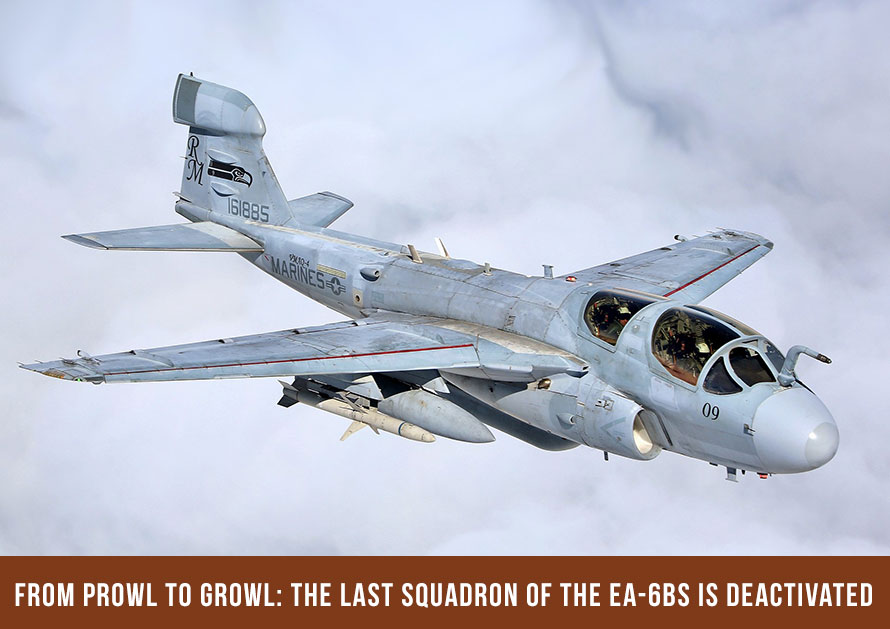 On Friday, March 8, 2019, the Marine Corps will hold a deactivation ceremony for the final squadron flying the EA-6B Prowler. Marine Tactical Electronic Warfare Squadron 2, the first Marine Corps squadron to transition from the EA-6A Electric Intruder to the Prowler and the last to fly it in combat action last year against ISIS, says goodbye to the storied aircraft.

Since its introduction to service in 1971, the carrier-based EA-6B Prowler has been on the Navy and Marine Corps front lines for 42 years. This electronic warfare aircraft has been steadily replaced with the EA-18 Growler since 2009. The twin-engine Prowler is a four-seat aircraft that hosted a pilot and three electronic countermeasures officers. Its two turbojet engines produced 10,400 lbf of thrust each, propelling it to a maximum speed of 650 mph. It had a range of 2,022 mi and a service ceiling of 37,600 ft. It had 5 total hardpoints and with electronic warfare pods attached, typically only carried two AGM-88 HARM Anti-radiation missiles.

Also read: With A Growl Surface-to-air Missile Systems Are Blinded

The Growler is based on the F/A-18 Super Hornet airframe. It carries a crew of two, a pilot and an electronic warfare officer. Its two turbofan engines produce 22,000 lbf of thrust each. It has a maximum speed of 1,190 mph. The Super Hornet has a range of 1,275 miles and a service ceiling of 50,000 ft. It has 9 total hardpoints and with its electronic warfare pods, will carry AIM-120 AMRAAM missiles for self-protection and the AGM-88 HARM missile.

Here is more on the recent retirement ceremony of the EA-6B squadron from Military.com

EA-6B Prowler | Behind the Wings