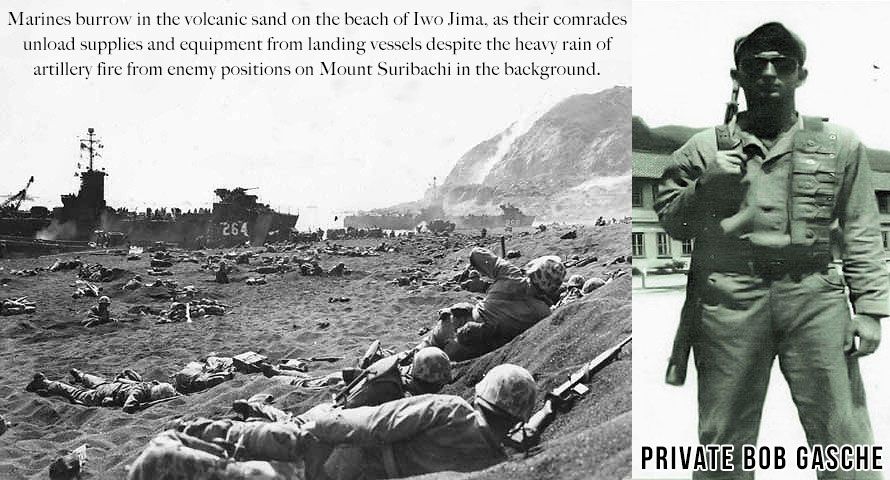 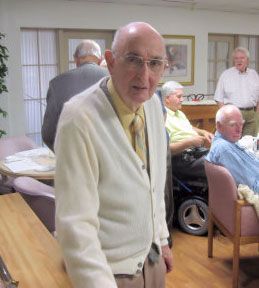 The Greatest Generation –Tom Brokaw coined the phrase to identify a generation of Americans who grew up during the Great Depression and saved the world in WWII, by fighting the Nazis or Japanese, and whose productivity created the materials on the home front that contributed to the war effort. If you ever needed a picture of a man who represents this era, you wouldn’t need to look any further than U.S. Marine Corporal Robert “Bob” Gasche.

Bob is 92 years old and one of the last surviving WWII Marines who participated in the assault on Iwo Jima. Before he was old enough to enlist, he was a teenager working the shipyards in Savannah, GA, like the rest of America, supporting the war effort.

In March of 1943, he was finally old enough to enlist and he joined the Marine Corps so he could be close to the action. He got all the action he needed when in February 1945 Bob joined the assault on Iwo Jima.

Iwo Jima in the Pacific

The battle for Iwo Jima matched 70,000 Marines against 18,000 Japanese. It was the bloodiest battle in Marine Corps history. During the 36 day battle, 7,000 Marines were killed and 20,000 wounded. The Japanese fought to the death, knowing that holding the island was impossible, but slowing down the Americans was important. When the island was designated secure, only 216 of the 18,000 Japanese were captured. Iwo Jima would not only become the jumping-off point for the U.S. invasion of Okinawa, but its airfield became an emergency landing site for more than 2,200 B-29 bombers.

Bob would see many of his buddies injured or killed on that black ashe island. As his unit pushed forward into battle, he witnessed the U.S. flag after it was raised on Mount Suribachi. During a charge on a pillbox, a concrete bunker housing automatic machine guns, Corporal Bob Gasche joined the 20,000 who would be injured when he was hit in his abdomen with shrapnel from a nearby explosion. He would be evacuated to Hawaii, and his fight in the Pacific during WWII would end.

Bob Gasche would marry and settle down in Gainesville, Florida where he raised three children. He would later be called upon again to serve his country. He spent another year in Korea in combat. Because of his experiences, Bob has been very active throughout his life with veterans organizations.

We Are Privileged to Help Bob

On October 1, Bob is due to speak to the Naval Test Pilot School in Baltimore, MD about leadership and ethics. He is traveling with another Marine, Corporal Stephen Dodd who served as a Tunnel Rat in Vietnam. Dodd was awarded 3 Bronze Stars and 2 Purple Hearts for his action in Vietnam. Due to Gasche’s advanced age, it is difficult for him to fly commercial to and from Gainesville, FL to Baltimore, MD.

As more of these men who served to keep America free leave us, it is important to listen to their stories in their own words. We invite you to watch an interview with Marine Corporal Bob Gasche in Reflections on Iwo Jima.