Air Force One and Marine One – About VIP Transport

Air Force One and Marine One – Two different mission capabilities working together for one common goal: to conveniently transport the President of the United States safely and securely. Each platform is the best in the world at what they do. 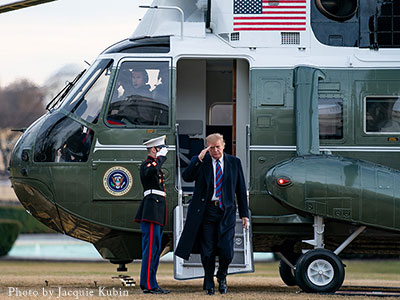 Marine One is the call sign when the president is on board any Marine Corps helicopter. Generally, Marine One refers to one of the VH-60N Whitehawk or VH-3D Sea King used by Marine Helicopter Squadron One (HMX-1) for Presidential and VIP transport. There are 11 Sea Kings and 8 White Hawks in the HMX-1 presidential fleet. Marine 1 is also called White Top because of its signature white top and dark green bottom exterior paint design. Often there will be multiple White Top that take off simultaneously, one or more acting as decoys to the actual Marine One. Other helicopters of HMX-1 are used for the Vice President, other visiting heads of state, and other VIPs as directed by the White House and Marine Corps. Whenever the Vice President of the United States is on a Marine helicopter, its call sign will be Marine 2.

The history of Presidents flying on a helicopter began in 1957 with President Dwight D. Eisenhower. Eisenhower needed a quicker way to get to his summer home without using a traditional limousine motorcade. This first flight on July 12 saw the President lift off from the White House lawn in a UH-13 Sioux helicopter. In 1958, both the Army and Marines provided helicopter transport but in 1976 the Marine Corps would begin to provide all presidential helicopters. The president uses the White Tops for short flights around Washington, D.C., within the United States, and even when visiting other countries. The helicopter is primarily used as the transportation between the White House and Andrews Air Force Base where the President boards Air Force One. When the president attends events, Marine One also delivers him between Air Force One and his destination.

Air Force One is the call sign when the president is on board any Air Force aircraft. Generally, when referencing this name, Air Force One specifically refers to one of the two VC-25As, specially modified Boeing 747s for Presidential VIP transport. This specialized aircraft is also sometimes called the Flying White House. Despite nicknames and official calls signs when the President is on board, these two VC-25s have tail numbers 28000 and 29000. 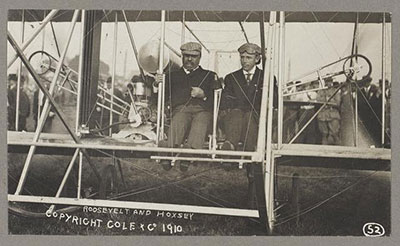 Presidential transport using a plane gets its start with President Theodore Roosevelt in 1910. In this first flight by an American president, he and Arch Hoxsey, an employee of the Wright Brothers, fly in a Wright Type AB airplane at Kinlock Field in St. Louis, Missouri. The first president with a military aircraft designated solely for his use would be President Franklin D. Roosevelt. In 1945, he would be assigned a VC-54C, a specially modified Consolidated C-87 transport nicknamed The Sacred Cow. He would only make one flight in the VC-54C in February 1945 before his untimely death in April 1945. A few other aircraft with names of Independence and Columbine would serve American presidents. In 1953, the first instance of the president’s aircraft having the call sign Air Force One comes about following a near mid-air collision. At the time of the incident, President Eisenhower’s plane had the same call sign (8610) as another nearby flight and the confusion nearly caused a catastrophe.

As you will see in the below videos, Air Force One is not just a transport aircraft. Its a highly sophisticated platform that functions as the White House when the president is aboard. It has a large office called the Oval Office in the Air. It has a presidential stateroom where the president can sleep or relax. It also a full kitchen, dining area, meeting area, a VIP sitting area, and a press seating area as they travel with him.

Any Air Force aircraft that Vice President of the United States is on is referred to as Air Force Two. Typically, the vice president flies on a C-32A, which is a modified version of the Boeing 757 that is upgraded for VIP service. Though the C-32A is used by the vice president, the Air Force has a fleet of planes available for him, cabinet members, and top staff.

A Future for Marine One and Air Force One 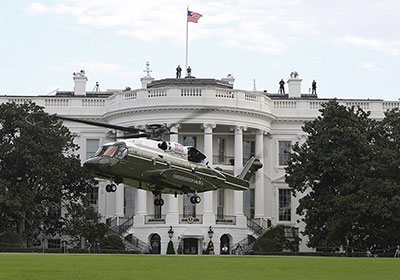 For Marine One, the future of presidential helicopter transport will be the VH-92A, which is based on Sikorsky’s successful S-92A commercial aircraft that has over one million flight hours worldwide. Sikorsky will soon begin building the first six of 23 new VH-92A helicopters for HMX-1. These new medium-lift transportation aircraft will have two powerful turboshaft engines producing 2,520 shp each using a four-blade main rotor. It has the potential to travel 190 mph with a range of 621 miles.

For Air Force One, the future of presidential air transportation will see the two Boeing VC-25A (Boeing 747-200) planes replaced with Boeing’s 747-800 in 2024. These new 747 well be longer and wider than the current aircraft. It will also be faster and travel much farther than the current -200s. These newest Air Force will be listed as VC-25B.

Want to learn even more about both types of presidential transport? Follow the links below to watch documentary videos about both Marine One and Air Force One. If you enjoy this article, please share it with your friends and colleagues.

National Geographic – On Board Marine One Documentary

Air Force One: Inside the Oval Office in the Sky

Inside Air Force One: Secrets to Presidential Travel