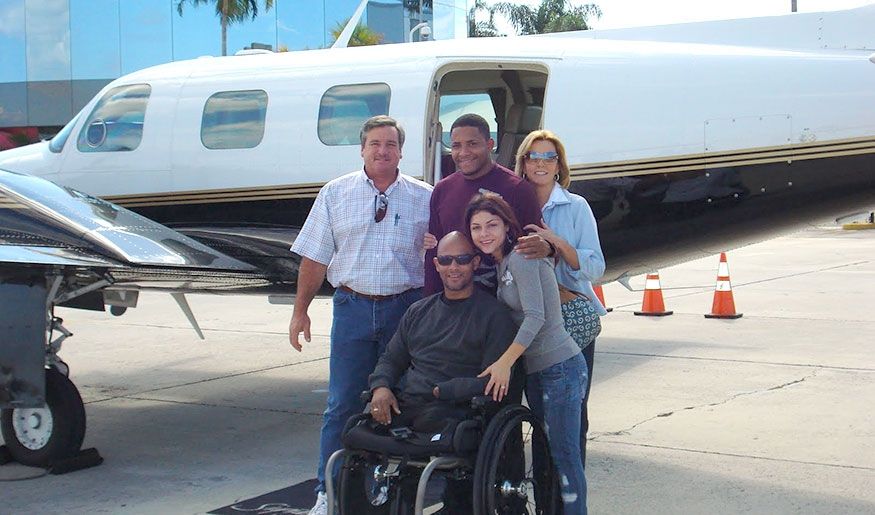 Imagine that you are an injured U.S. military veteran wounded from a previous deployment to Iraq and whose missing both legs from an explosion. You have a wheelchair you depend on to get around but it was recently damaged in an accident, severely limiting its use. Let’s say you live in Jacksonville, Florida but you need to travel to Washington, D.C. to have your wheelchair replaced. Your wife is going to join you for support and help you to get around but airline tickets are out of the budget. You’re feeling helpless in your situation, knowing you desperately need to get the chair replaced. What do you do? Dan and Cheryl Rogers with U.S. Marine Sergeant Carlos Evans and his family

Owners of Duotech Services, Inc., Dan Rogers, President, and Cheryl Rogers, CFO, are two of those members of this organization who have volunteered their flying time and their aircraft to Veterans Airlift Command. They have carried wounded veterans to and from medical appointments on the same day and also reunited them with their family. They have formed friendships with these wounded veteran heroes and their families over the years.

One such friendship that evolved from an early flight is with Major Kent Solheim. Serving for over 18 years in the U.S. Army, Major Solheim was wounded in Iraq in 2007, during one of his six times deployed in support of Operation Enduring Freedom and Operation Iraqi Freedom. Since their first flight, the Solheim’s and Roger’s families have become close. This bond has led to the Roger’s supporting Major Solheim’s non-profit organization, Gold Star Teen Adventures. This organization provides outdoor adventures, scuba diving, and sailing camps to children of special operations Service Members who lost their lives in the line of duty. Dan and Cheryl Rogers are a major sponsor of the Outdoor Adventure Leadership Camp held in western North Carolina.

Duotech is proud to be a Corporate Sponsor of Veterans Airlift Command. We believe that every day is the day to thank a veteran for their service. But, as today is Veterans Day, Duotech says THANK YOU to all who served.