Elephant Walk of the Osprey 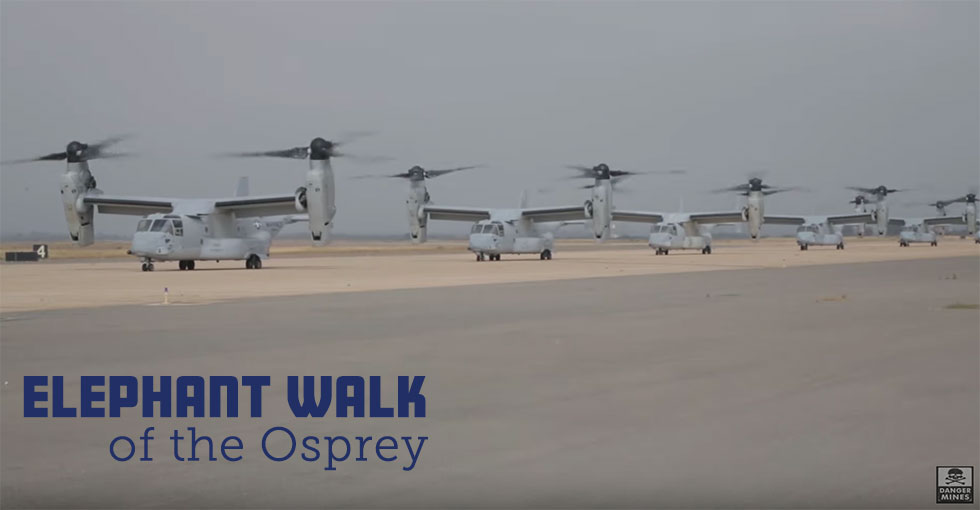 Miramar, California is home to a U.S. Marine Corps installation just outside San Diego. More than 12,000 Marines and Sailors are stationed there. But to most people, Miramar is probably more known for its days as the Naval Fighter Weapons School, also known as TOP GUN. Yes, the 80s era movie of the same name featured Tom Cruise as U.S. Navy Lt Pete “Maverick” Mitchell flying the F-14 Tomcat like his hair was on fire.

In the early 1990s, due to many base closures due to Base Realignment and Closure (BRAC), military aircraft commands and squadrons were shifted from different parts of the country or were disbanded. Air Wings like 3rd Marine Aircraft Wing (3rd MAW), previously located at El Toro and Tustin in California were relocated to Miramar, California and TOP GUN school was sent to Naval Air Station Fallon in Nevada.

During those Naval Fighter Weapons School days, Miramar was known as Fightertown USA. In the 1970s, 80s, and 90s, the best Naval Aviators in the fleet brought their F-4 Phantoms, F-14 Tomcats, and F-18 Hornets to train and compete in aerial combat situations against experienced instructors to become the best dogfighter pilots in the world. Today, U.S. Marine Corps F-18s and F-35Bs, refueler tankers, rotary wing, and tilt-rotary wing aircraft of 3rd MAW prowl those same runways. Their missions still include training for readiness. However, today Miramar is home to combat ready aviation elements of the 1st Marine Expeditionary Force (1st MEF) ready to ship around the world at any moment.

One spectacular event that is sometimes captured on an airbase is the elephant walk. The elephant walk is a military term for taxiing a lot of military aircraft simultaneously, in tight formation, as they wait to take off. The video below captured at Miramar on June 6, 2019, shows an elephant walk made up of twenty-seven tilt-rotor MV-22B Ospreys and sixteen CH-53 Super Stallions. This lineup of 43 aircraft preparing for flight is a magnificent display of strength as they showcase the tactical capabilities and combat power of Marine Air Group 16 (MAG-16).

Introduced into service in June 2007, the MV-22B Osprey is a multi-mission tiltrotor military aircraft capable of both short takeoff and verticle takeoff. It combines the functionality of a helicopter while also possessing the long range and high speed of a turboprop aircraft.

The CH-53 King Stallion is a heavy-lift rotor-wing aircraft that can transport cargo or up to 55 Marines quickly to shore at speeds over 200 mph. It can carry 30,000 pounds of cargo or 36,000 externally from a single sling hook.

If maintained well, a helicopter can have a long service life. As the helicopter ages, so do the electronics the pilot depends on to keep it flying. Upgrading or completely replacing those avionics systems can be out of the budget for many militaries, government, and civilian operators. Even with tight funding, these systems must be maintained. Another option for supporting the aging and obsolete systems is repair or overhaul of the electronic and electromechanical equipment of the aircraft.

Duotech Services solves the engineering, reverse engineering, repair and re-manufacturing problems of military and civilian agencies as well as aerospace and commercial users of electronic and electromechanical equipment in rotary wing aircraft. Along with the CH-53, other platforms Duotech supports include the OH-58 Kiowa, UH-1 Huey, UH-60 Black Hawk, AH-1 Cobra, and AH-64 Apache. Duotech provides high-quality services to our customers within the budgeted schedule, maintains an AS9100D registration, and is a qualified repair station for thousands of items. You can begin your Part Number Search or request a repair quote from Duotech today.