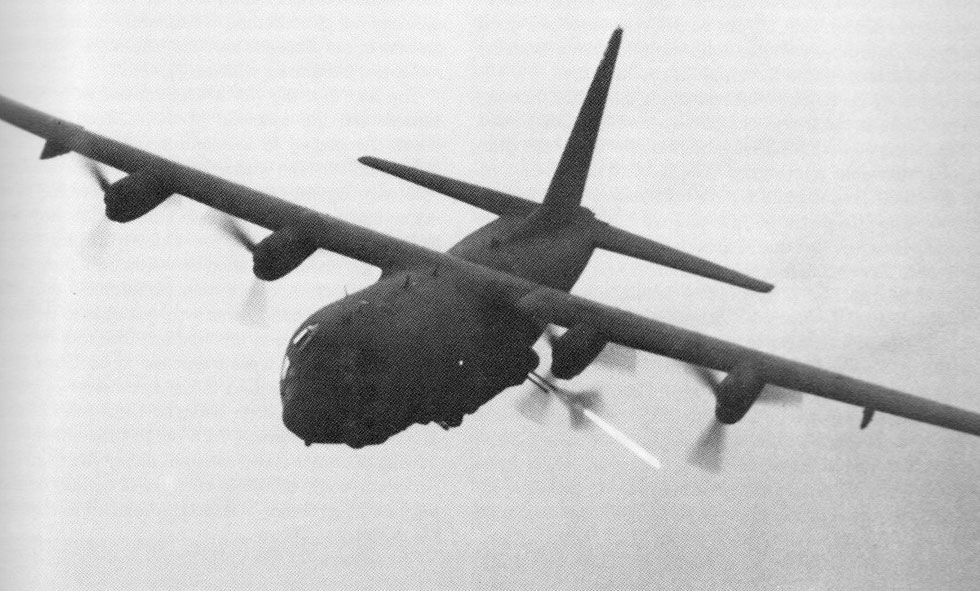 In the dead of the night, a cargo aircraft pops out of a cloud. At 10,000 feet above the dark landscape below, the aircraft loiters just outside of the battlefield, cutting large circles in the sky. Onboard, a team of professionals prepares themselves for their mission if they get the call that they are needed below. Loaded for bear, the 13 man aircrew await the call to drop altitude and quickly get on station above the door kickers they are supporting on the ground.

The aircraft is the AC-130U Spooky. Its primary mission is to provide close air support (CAS) for ground troops and special operations units like those operating below them that are chasing down a lead on a high priority target. The AC-130 is a long endurance ground attack aircraft that is a heavily armed variant of the C-130 Hercules. The AC-130 incorporates port side-firing weapons systems and utilizes sophisticated fire control, navigation, and sensor systems to deliver their firepower precisely at night and in adverse weather conditions.

The AC-130 gunship performed some of its first flights under combat conditions in 1967 during the Vietnam War. During that war, it was responsible for the destruction of more than 10,000 trucks and saving many lives providing close air support missions. In the Cold War during events like Operation Urgent Fury in Grenada in 1983, the gunships suppressed enemy air-defense systems and attacked ground forces that helped provide mission success on the assault of Point Salines Airfield. In the Gulf War, one AC-130 call sign “Spirit 03” was lost when it was shot down by Iraqi troops while supporting American forces protecting Khafji, a coastal Saudi Arabian city. This was the last AC-130 to be shot down. During Desert Storm, the AC-130 wreaked havoc on the retreating Iraqi troops. During the War on Terror, the lumbering gunship was employed by Special Operations Forces to attack high-value targets.

Powered by four Allison turboprop engines that produce 4,910 horsepower each, the AC-130U is capable of a speed of 300 mph and has a ceiling of 30,000 feet. This very powerful close air support platform can deliver its weapons package a long distance from home with a range of 2,531 miles. With aerial refueling, its range is unlimited and its time on station near the target is too.

If You Hear The Thunder You Weren’t The Target

When the request comes in for Spooky to do its job, it does so with the power of thunder. With the AC-130U, it can pound a target with a 25mm GAU-12 Gatling gun, an L60 4mm Bofors cannon, and one M102 105mm cannon. As the pilot dips the wing into a left banking turn to circle the target, its Gatling gun will rip up the ground with 1,800 rounds per minute. Delivering devastating damage, its Bofors cannon is capable of 100 shots per minute. But the thunder comes from the 105mm cannon blasting away at 6-10 rounds per minute.

The newer AC-130W Stinger II is armed with more stand-off weapons than cannons but is still very deadly in its own right. It still possesses a 30mm GAU-23 Cannon but now can deliver precision-guided bombs from long distances away from the target. On outer wing pylons, it is capable of carrying many precision weapons like the AGM-114 Hellfire missiles and GBU-39 Small Diameter Bombs.

Like its much smaller brother A-10 Thunderbolt II, the AC-130 is an outstanding close air support platform that is a welcome sight to the troops in battle on the ground. But, more than just fulfilling a CAS role, the AC-130 serves other missions too.

Close Air Support – its primary mission is the direct support of troops on the ground. Models up to the AC-130U pound the targets from directly overhead but the Whiskey model is capable of more standoff attack.

Air Interdiction – this would include sending the AC-130 behind the front battle lines to engage key enemy targets like troops or supplies in order to interrupt, delay, or destroy Their ability to bring those items to the battleground or lessen the threat of those items is the key.

Armed Reconnaissance – the gunship can also patrol a region or gather intelligence on targets while locating and attacking targets of opportunity instead of attacking predetermined targets.

Because the AC-130 flies low and slow, it is vulnerable to anti-aircraft weapons despite its electronic countermeasures. While the AC-130 was very effective in a low-threat environment, like in Iraq and Afghanistan, it will not have that advantage where enemy air defenses are much stronger and therefore can complicate the ability to provide CAS. With electronic warfare threats increasing from its potential enemies, the AC-130 is developing into a standoff-focused platform. This can keep it out of harm’s way while still delivering devastation to the enemy on the ground.

As mentioned earlier, the AC-130 is a variant of the sixty-year-old cargo aircraft, C-130 Hercules. How long it remains operational or whether it develops further to keep it performing its primary mission may be unknown. But there are other possibilities for future gunships that are much younger and are more capable in speed and ceiling limits like the C-17 Globemaster III. Could there be an AC-17 gunship in the future? The C-17 is a little larger than the C-130, but powered by four turbofan engines produces 40,000 pounds of thrust per engine, which propels the C-17 to a cruising speed of 550 mph and a service ceiling of 45,000 feet.

Since the C-130 is over six decades old, it has several problems with diminishing manufacturing sources (DMS). To avoid scrapping repairable electronic equipment on aging platforms like the C-130, operators need to identify capable sources that can use reverse engineering and re-manufacturing processes to repair, overhaul, or modify broken or missing parts that no longer exist. This is equally true when repairing assemblies and subassemblies of the Azimuth-Range Indicators identified as the IP-988 PN: 657303-1 from the APQ-122(V) or the IP-1043 PN: 692760-1 of the Radar Set APQ-122(V)5.

The AC-130 Gunship Inside and Out

This is America’s AC-130 Gunship on Steroids

Deadly AC-130 Gunship in Action Firing All Its Cannons