TERRAIN TERRAIN, PULL UP! PULL UP! 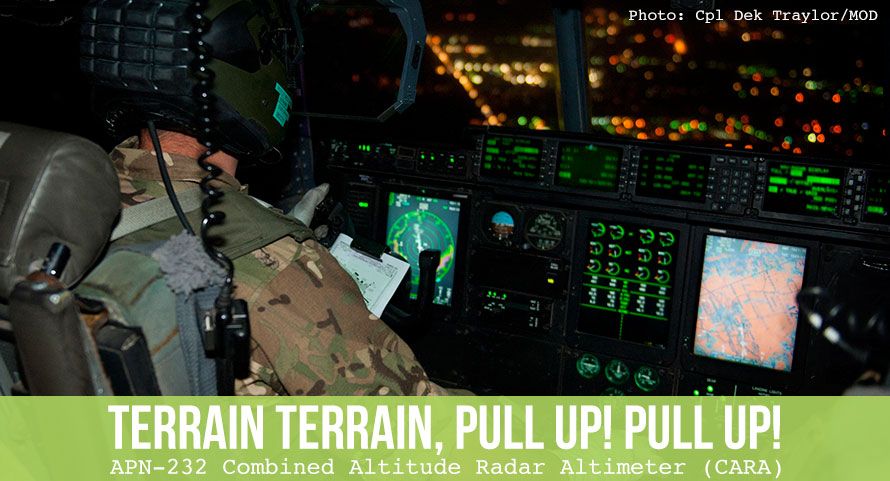 As a combat pilot skimming the earth to avoid radar detection, anti-aircraft guns, and surface-to-air missiles, you want to be sure of your altitude at all times. If inclement weather requires you to follow Instrument Flight Rules (IFR), it is some comfort to have a monitoring system notify you if you are dangerously close to the ground. Also Read: Know Your Altitude Because “Flying is Not Dangerous; Crashing is Dangerous.”

A barometric altimeter in a jet provides the pilot the altitude of their fighter jet above mean sea level. When that pilot needs to know the altitude above the terrain currently under their aircraft, it requires a radar altimeter. To determine where the terrain lies below or in front of the aircraft, the radar altimeter transmits a radio wave to the earth’s surface, receives the reflected signal, and then processes the information. Basically, an altimeter operates similarly to a fish finder on a boat. The fish finder transmits a sound wave underwater and measures the return to find the body of water’s bottom or the fish at various depths below the boat. Knowing the depth of water below you can help you avoid grounding the craft.

In aircraft like the C-5, C-17, C-130, KC-135, F-15, F-16, MH-53, T-43 and UH-1, one of the most common radar altimeters is the APN-232 Combined Altitude Radar Altimeter (CARA). The CARA provides information to a pilot concerning the proximity of the aircraft to the ground to avoid a collision. It also provides other altitude-related signals like altitude standby signal, radar altimeter ready signal, low altitude warning, altimeter out-of-track, and altitude reliability signal.

The APN-232 consists of two antennas under the nose in the forward equipment bay, a receiver/transmitter, a signal data converter, and an indicator. The system also provides analog and digital outputs to aircraft avionics systems.

Its Receiver-Transmitter (RT) RT-1438 transmits a signal through the antennas to the earth’s surface, receives the reflected signal, processes the information, and provides the resulting altitude-related data from 0 to 50,000 feet to various avionics systems. In order to interface the R/T with a multitude of electrical interfaces in different aircraft, it possesses a signal data converter. Pictured to the right is the Signal Data Converter (SDC) CV-3807, a component of the APN-232 Combined Altitude Radar Altimeter. The converter is a solid state, microprocessor controlled signal converter that translates the digital output of the Receiver-Transmitter, allowing the R/T to interface with a multitude of electrical interfaces of many avionics systems in different aircraft.

Duotech provides repair services of electronic components for a variety of fixed wing and rotary wing aircraft systems. Duotech has extensive test and repair capabilities for the AN/APN-232’s components, including the Receiver/Transmitter and Signal Data Converter. You can begin your Part Number Search or request a repair quote from Duotech today. Also Read: Know Your Altitude Because “Flying is Not Dangerous; Crashing is Dangerous.”