Fire Suppression Over A Hot LZ 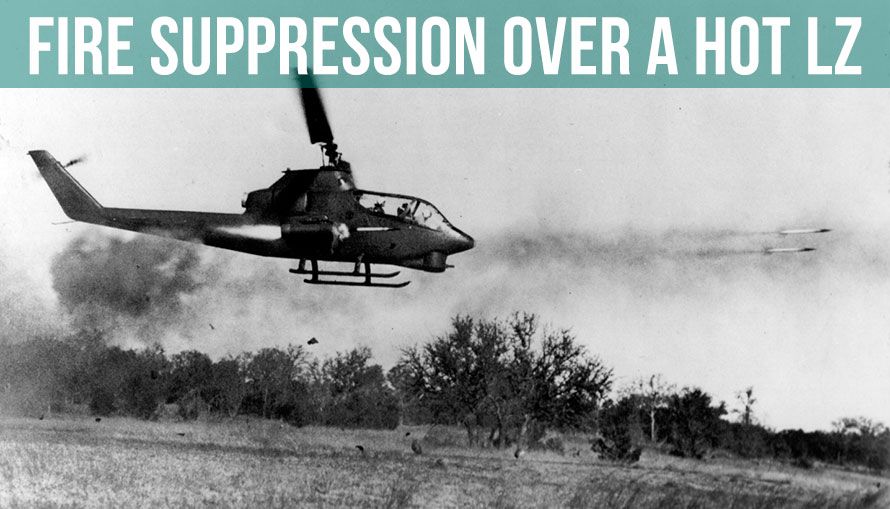 During Vietnam, there was a great need for armed escort helicopters to protect UH-1 Huey Helicopters carrying troops and cargo into a hot landing zone (LZ). Though helicopters served the military in Korea mostly for light transport and medical extraction, it was Vietnam that really pressed choppers like the Bell UH-1 Iroquois, also known as the Huey, into action as a transport for armed infantry quickly behind the enemy’s line. With this new role, the helicopter not only provided a very effective tool to disrupt enemy operations but also put the helicopter into more contact with the enemy, subjecting it to enemy fire.

To counter this, the United States began to arm the Huey. Door gunners and rocket pods allowed for some protection and cover fire for operations into hot LZs, but the UH-1 was still vulnerable to ground fire. Arming the platform was a temporary answer. The military needed a quicker, heavily armed, less vulnerable and much more deadly solution. Bell Helicopter, producer of the UH-1 Huey, would address this need with an aircraft that would provide landing zone fire suppression support. Using the engine, transmission, and rotor system of the Huey, Bell developed a two-bladed, single-engine attack helicopter, which was designated the AH-1 HueyCobra. It was more slender than the Huey and had a tandem cockpit for a pilot and a gunner.

Since its introduction in 1967, the HueyCobra became the lethal escort helicopter the Army and Marine Corps were needing. Following a request by the Marine Corps for a twin-engine version with more armament, like a potent turret-mounted weapon, and better load carrying capabilities, Bell would deliver the AH-1 SeaCobra and SuperCobra in 1969.

The Super Cobra would fulfill the Marine Corps amphibious mission requirements during ship to shore operations, as well as landing zone fire suppression support, visual armed reconnaissance, convoy escort and fire suppression for ground units, among and other roles.

Future upgrades would incorporate a new M147 Rocket Management System (RMS). The RMS is a light anti-personnel assault weapon featuring 2.75-inch folding fin aerial rocket (FFAR) warheads. It allows for the firing of both the MK40 and MK66 rockets. These rockets are mounted in the M260 7-tube or the M261 19-tube rocket pods that could be carried on each of the outboard and inboard wing hardpoints.

The pilot selects the desired type of 2.75-inch aerial rocket warhead, fuze, quantity, range, and rate using the Display Unit (Rockets) Panel located in the pilot station. You can see its location amongst the other instruments in the cockpit panel in Figure 1. The rocket launcher pods are divided into zones as shown in Figure 2. The display panel also provides the pilot real-time information about the remaining rounds per zone. See Figure 3 for the pilot display panel.

The Zone Inventory allows for input of the appropriate warhead and fuse type in that specific zone. The center area of the display includes a test switch, rounds remaining, and zone arming indicators. The lower section allows the pilot to introduce data concerning whether a fuse has a delay or is to detonate immediately, the time interval between pairs of rockets fired, the number of rockets to be fired each time, and the range in kilometers for rocket ballistic solutions sent to the fire control computer (FCC).

Today’s latest variant of the Cobra, the AH-1Z Viper, is a twin-engine, bearingless, hingeless four-blade rotor system. It has two redesigned, longer wing stubs that include a wing-tip station on each for air-to-air AIM-9 Sidewinder missile. The Viper’s wings stubs also contain up to 6 pylon station and can carry up to 16 AGM-114 Hellfire air-to-surface missiles in four-round M272 missile launchers. The AH-1Z is a formidable weapon against armored vehicles, enemy combatants, and other aircraft with the addition of its air-to-air missiles.

Duotech repairs the M147 Rocket Management System Display Panel like the one pictured in Figure 4. Following the initial inspection by DSI Technicians, damage found to this particular display was repaired. Following the testing and calibration of the unit, the Display Unit Rocket Panel (P/N 12011866) was returned to the end-user. Duotech maintains an AS9100C registration and is a qualified repair station for thousands of items. You can begin your Part Number Search or request a repair quote from Duotech today.