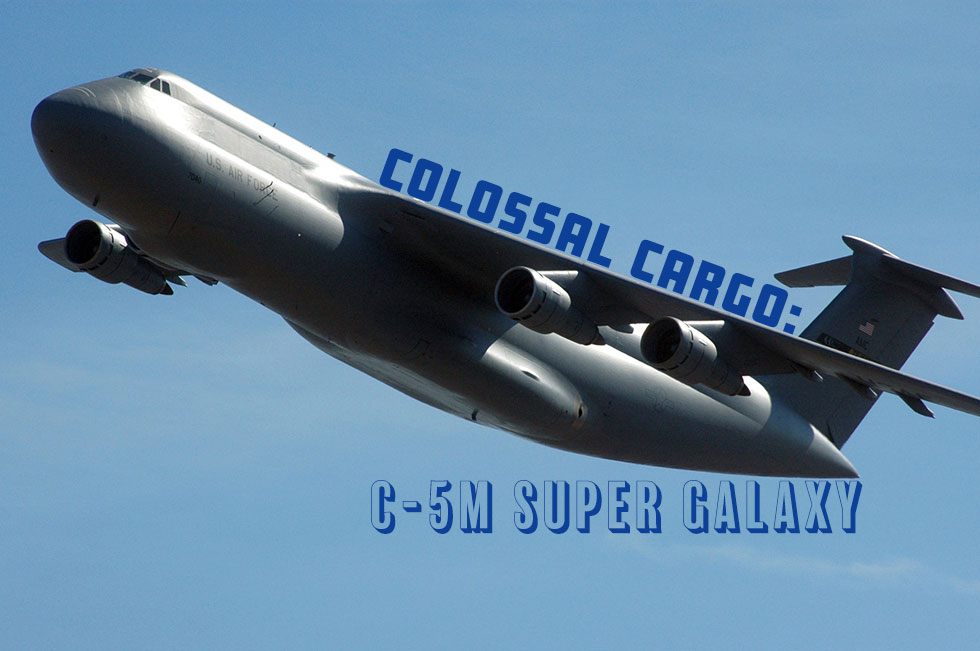 When the military needs to transport troops, weapons, and military equipment quickly, it calls on its heavy lifter cargo aircraft. Which cargo aircraft is used will depend on the number of troops and equipment to be delivered into the battle theater and the access to long runways that are in good condition.

The United States has two workhorse aircraft that can adapt to very short, rough runways – the C-130J Super Hercules and the C-17 Globemaster III. At 97 ft 9 in long, the C-130 is about half the size of the 174 ft long C-17. The Hercules can carry up to 92 passengers or one Light Armored Vehicle (LAV). The much larger C-17 can deliver 134 passengers or three Stryker armored fighting vehicles.

But if the U.S. military has access to a much longer, stable runway, they have capabilities to deliver more troops, more equipment, and larger vehicles in fewer flights. In these circumstances, the C-5M Super Galaxy would be called upon to fulfill the mission.

Since its first flight on June 30, 1968, the C-5 has been one of the largest aircraft in the world. It’s the United State’s primary aircraft for moving large amounts of cargo to global theaters around the world. With an overall length of 247 feet 10 inches, the C-5 is 17 feet longer than the C-17. It’s powered by four General Electric engines that create 51,250 pounds per engine. Compare that to the C-17’s 4 engines that create 40,440 pounds of thrust each.

The C-5M Super Galaxy has a speed of 518 MPH and has a service ceiling of 41,000 ft. The behemoth aircraft has a minimal aircrew requirement of four but a typical crew consists of seven; a pilot, co-pilot, two flight engineers, and three loadmasters. Its load capability is hefty, carrying as many as 73 passengers while still transporting two Abrams tanks. Or it can carry those troops along with one Abrams tank and two Bradley fighting vehicles. Without refueling, the C-5 has a range capability of 5,524 miles while carrying 120,000 lbs of cargo. 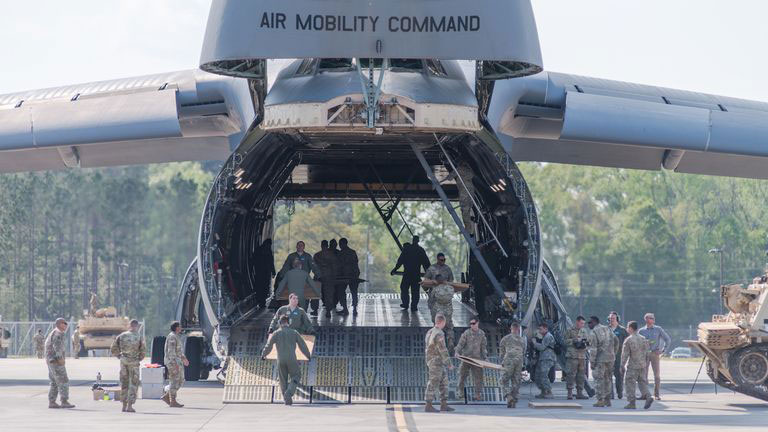 Both the nose and the aft of the aircraft open its full width which allows simultaneous loading and offloading of cargo. | U.S. Air Force Photo

In order to swallow two gigantic tanks, the C-5 has the ability to load from the front and the rear of the aircraft. Both the nose and the aft of the aircraft open its full width, which allows simultaneous loading and offloading of cargo. This facilitates wheeled and tracked vehicles to drive through the cargo area during the loading and unloading process. The C-5 is even equipped with a “kneeling” landing gear system, which allows it to lower to a truck bed height. The entire cargo floor of the C-5 contains a roller system for the rapid loading of its 36 pallet capability.

Since its introduction into service, the C-5 Galaxy has been flown by the U.S. Air Force, Air Force Reserve, and Air Nation Guard. The U.S. Air Force owns and operates 52 of the giant cargo aircraft. During its five decades of service, the C-5 has delivered essential supplies in nearly every operation the U.S. has participated in. Just a few of these missions involved transporting strategic materials during the Vietnam War, the 1973 emergency airlift to Israel, Desert Shield/Storm, supporting peacekeeping operations around the world, and even being considered as transport of NASA’s Space Shuttle. When Air Force One transports the president to meetings around the globe, a C-5 often travels in advance to deliver the President’s motorcade and other necessities.

If you are looking for another aircraft that is similar in size to the C-5 Galaxy then Russia’s Antonov An-124 Ruslan is your best bet. The Ruslan was introduced in 1986 and has an aircrew capacity of seven, the pilot, co-pilot, two flight engineers, a navigator, a communications officer, and a loadmaster. Its overall length is 226 feet and is 68 feet high. Powered by four large turbofan engines, the An-124 has a cruising speed of 497 miles per hour and a service ceiling of 38,000 feet. While carrying 80,000 lbs of cargo, it has a range of 13,694 miles. The Ruslan has a maximum takeoff weight of 800,000 lbs of cargo. Compare that to the C-5s 769,000 lbs maximum takeoff weight.

Unlike the C-5, which is only flown by the U.S. military, the An-124 has been operated by the Soviet Union and other countries like Ukraine, United Arab Emirates, and previously by Libya. It functions as a military strategic cargo carrier and is used commercially, too. Though Russia designates it as Ruslan (Great Lion), NATO reporting name is Condor. It has a pressurized cargo area that is 20% larger than the C-5. But like the C-5, it can open both the nose and rear cargo doors for easy loading and unloading.

Russia has plans to replace the An-124 from a concept aircraft called Slon (elephant). It is expected to be 50 feet longer than the Ruslan bringing it to 270 feet. The Slon would also be powered by four powerful turbofan engines which produce 77,000 lb of thrust each versus the Ruslan’s current 50,000lb each. The engines would be mounted on a high wing like the An-124.

With an expectation of operating the C-5 through 2040, its lifespan is extended with modernization efforts that include advanced radar, mission communications, air traffic management, and communication systems. It will remain in service for decades to come carrying out America’s missions by delivering military equipment, troops, and the “Military 3 Bs” of Beans, Bullets, and Band-aids to locations around the world.