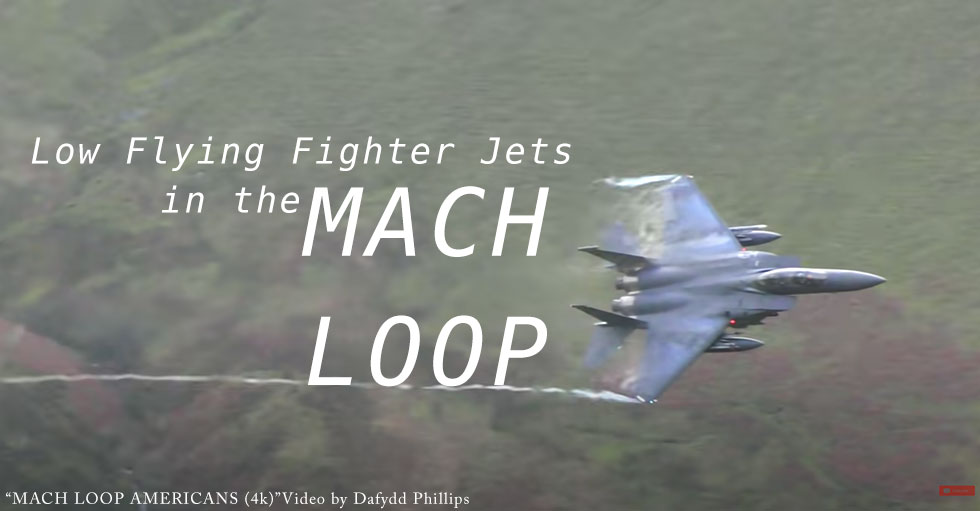 When you see fast-moving military aircraft, you are usually always looking up. For that matter, anytime any aircraft is moving through the sky, unless you are also on another aircraft, your head is tilted back and your eyes are squinting as you try to catch a glimpse.

But there are a few locations around the world where you can stand on solid ground while watching those fast movers scream by below you. Photographers and aviation enthusiasts who love the sights and sounds of large propeller driven cargo aircraft and the screams of turbo jet engines would want to schedule a trip to the Mach Loop in the United Kingdom.

The Mach Loop is also known as the Machynlleth Loop because of its proximity to Machynlleth in west-central Wales. It is a series of beautiful, deep valleys where United Kingdom, American, and NATO pilots practice low altitude training flights. The Mach Loop is a Mecca of sorts for photographers and aviation spectators alike because the mountain tops allow them a great vantage point to observe the fast movers from a unique position – from above. The Royal Air Force helps the public out by publishing a calendar of when they expect to use this airspace.

You never know what you might see coming up the valley toward you–F-15 Eagles, F-16 Fighting Falcons, Tornado GR4s, F-18 Super Hornets, and Eurofighter Typhoons. It might be big cargo and transport aircraft like a pair of C-17 Globemaster III or C-130 Super Hercules lumbering along through the curvy valleys. It’s not just fixed-wing but also rotary-wing aircraft like CH-47 Chinooks and CV-22 Ospreys. Even F-22 Raptors deployed across the Atlantic Ocean to England might just get the chance to slip and slide through the Mach Loop.

The United Kingdom provides a number of Low Flying Areas where pilots can hone their skills low to the ground. But the United States has its own Mach Loop-style low flying training area. Rainbow Canyon, also nicknamed Star Wars Canyon, located in Death Valley National Park in California is a series of desert canyons formed by ancient lava flows.

Enjoy these videos below filmed by many of those professional photographers who get to look down on those fast moving jet pilots. If you enjoyed this #JetFriday article, share it on your social media channels for your family and friends. If you’re like us and love jet aircraft, check out more of our Jet Friday posts.