C-17 Mission: Land On Dirt Airstrip, Unload 2 Apaches, and Take Back Off 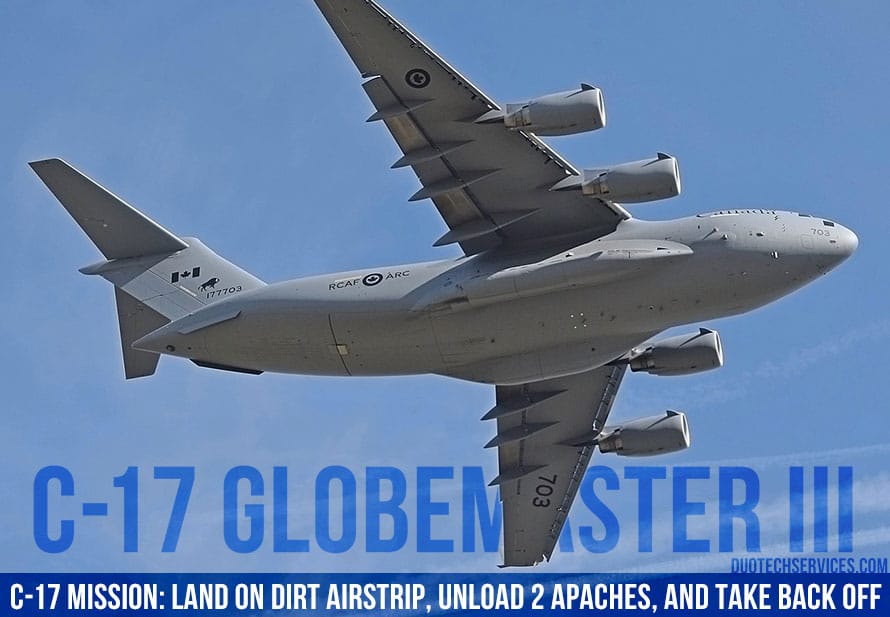 The C-17 Globemaster III is the workhorse of the U.S. Air Force. It’s not the flashy multi-role F-16 or the low-flying close-air-support A-10. But these big cargo and troop transports put in the work every day, keeping the U.S. military operating around the world in both peace and wartime. 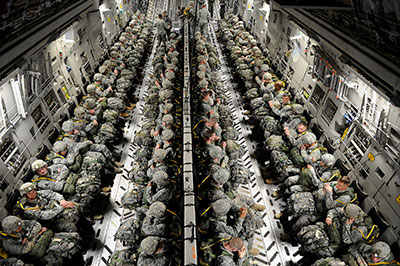 U.S. Army paratroopers from the 82nd Airborne Division sit strapped into a U.S. C-17 Globemaster III before they airdrop during the Joint Operational Access Exercise (JOAX) at Pope Air Force Base, N.C., Feb. 9, 2011.

Powered by four Pratt & Whitney turbofan engines that produce 40,440 lbf each, the C-17 can transport large amounts of cargo for distances of up to 2,700 miles without aerial refueling. Cruising at a speed of over 500 mph at an altitude of 28,000 feet, the Globemaster can deliver a load of 170,900 lbs. The cargo compartment is 88 ft long and 18 ft wide with a ceiling height of 12 ft 4 inches. With this payload capacity and space, the C-17 can transport 102 paratroops or as an aeromedical evacuation transport, 36 litters and 54 ambulatory patients and medical staff. When it comes to cargo transport the C-17’s cargo deck has positions for 18 pallets.

In the following video by AiirSource Military, a U.S. Air Force C-17 lands on a dirt runway, unloads two AH-64 Apache helicopters, and then takes off from that short airfield. Then U.S. soldiers of the 1st Attack Reconnaissance Battalion begin to assemble the two Apaches while other paratroopers are seen drifting to earth in the background.