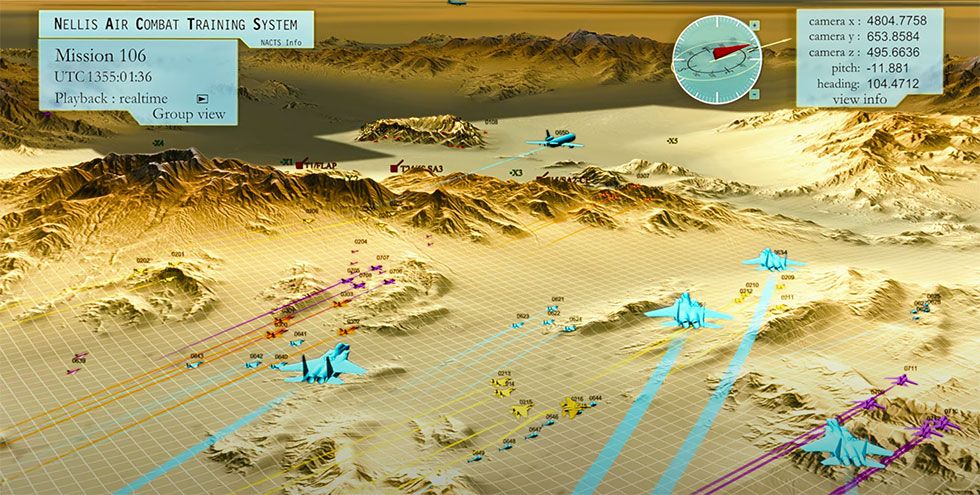 “It’s not a contest or a competition. There are no winners or losers. It’s about training and saving lives.” ~ Narrator, Fighter Pilot: Operation Red Flag

Above a 12,700 square mile area of desert in Nevada, F-15 Eagles from the United States Air Force, Eurofighter Tornados of the German Air Force, F-18 Hornets from Canada, and the United Kingdom’s Harrier Jump Jets will face off with some of the best pilots in the world – the bad guys in this training scenario. These ‘bad guy’ pilots are highly trained Air Force pilots themselves and will operate the extremely maneuverable F-16 Vipers as adversary aircraft. The good guys are the Blue Force and the bad guys are Red Force.

This is Red Flag, a large-scale aerial combat training exercise held just north of Las Vegas over the Nevada Test and Training Range, the U.S. Air Force’s premier military training area. The international training exercise provides some of the most challenging flying for many of the world’s best pilots.

Operating out of Nellis Air Force Base in Nevada, fighter jets will not be the only aircraft taking part in this exercise. The skies will also host B-2 heavy bombers, B-1 Lancers, and A-10 Warthogs – all training to destroy ground missile targets. These bombers and fighters will be supported by U-2 spy planes and KC-135 Stratotankers. Helicopters are not exempt from Operation Red Flag. Attack helicopters destroy surface targets and provide armed escorts to other rotary-wing platforms inserting troops on the ground to rescue downed pilots. These exercises include pilots, mission planners, engine mechanics, firefighters, search and recovery teams, and many other Air Force personnel.

Even though there are plenty of command coordination and safety policies in place to keep participants safe, every part of the team at Red Flag treats the 2-week experience like a real combat scenario. And like a real air combat operation, every mission over those two weeks is a highly coordinated aerial dance orchestrated by an AWACS surveillance platform.

Red Flag was first held in 1975 and brings together all air elements of the U.S. military as well as numerous units from NATO and Allied countries. Up to six Red Flag exercises are held each year at Nellis AFB. Another four will be at Eielson AFB in Alaska.