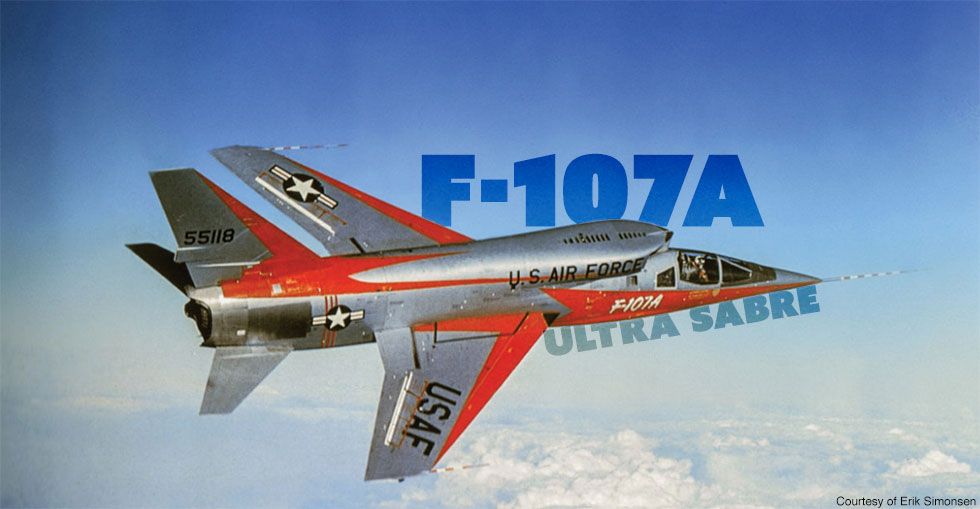 The 1950s and 1960s were a busy time for U.S. fighter jet development. Aircraft like the P-80 Shooting Star, introduced in 1945, brought America into the jet age. The war in Korea demanded even quicker, more agile fighters to stem the heavy U.S. losses of P-80s to Korean and Chinese pilots flying their much faster swept-wing MiG-15 Fagot. The U.S. introduced its own swept-wing fighter, the North American F-86 Sabre, to turn the tide in the skies over Korea. By the end of the war, the F-86 claimed a victory ratio of 10:1, with 792 MiGs lost versus 78 Sabres.

In the 1950s, the U.S. Air Force would issue a requirement for a nuclear-capable fighter-bomber that could achieve sustained Mach 2 flight. North American would use the F-100A Super Sabre structure as the base for its design to meet the Air Force requirements. Initially, it would be designated the F-100B. But with the major modifications to the F-100 airframe, the Ultra Sabre designation would become the YF-107. Though never officially named, the YF-107 would be known as the Ultra Sabre or Super Super Sabre. 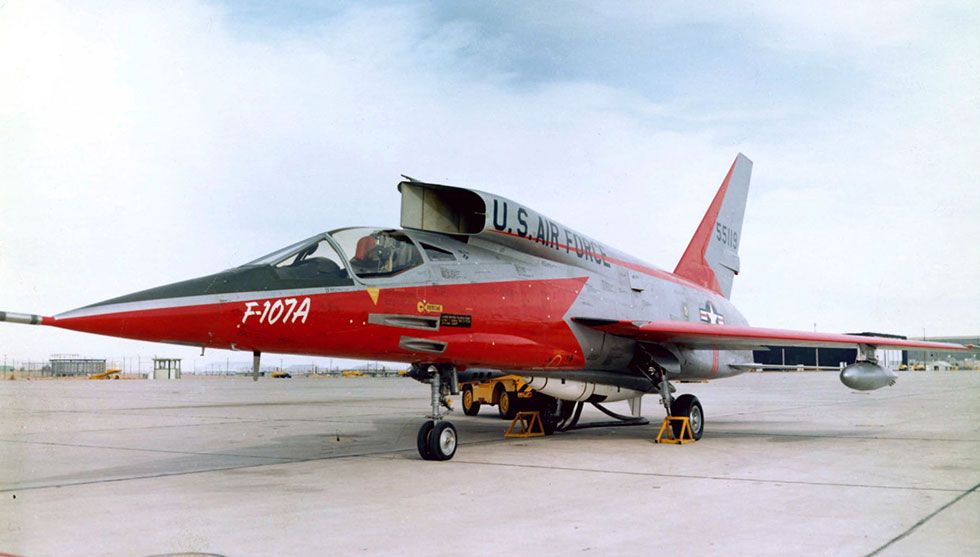 Most fighter jet air intakes are located on the underbelly or down the sides of the aircraft. Then there is the F-107A. The F-100’s air intake was on the nose of the aircraft. Due to the F-107’s need for radar, the nose was extended to have a cone that would house a radar. The Ultra Sabre would need the capability to carry a strategic nuclear bomb and the aircraft’s underbelly would have a recessed area for just that. The decision was to move the air intake to the top of the aircraft. With this inlet above and behind the cockpit, this design gave the F-107 a very unique design. With the unique placement of the air intake, the F-107’s canopy would have a special vertical opening action requiring the pilot to squeeze under to get into the cockpit. Other major adaptations to the F-107 frame were a nose cone to house a fire control radar and a one-piece movable vertical tail and roll control spoilers instead of ailerons.

Like any experimental aircraft, the Ultra Sabre would have its issues while in testing. During its maiden flight, the F-107 reached Mach 1.03 but its brake chute did not deploy. Because it landed at too great a speed, the nose gear strut broke, resulting in minor damage to the aircraft. It also had some tuning issues with the variable inlet duct creating some problematic flight conditions. The Air Force originally ordered 33 F-107s. However, the Air Force would require a fly-off against Republic’s competing F-105 Thunderchief, which was designed to complete the same mission profile. The competition was close but the Air Force would pick the F-105 and then reduced the F-107 order to just the 3 original aircraft. Of the three, two would wind up in air museums and the third was destroyed.

The F-105 Thunderchief, powered by the same turbojet engine, would have a top speed of 1,390 mph and a ceiling of 41,207 ft. Its range would be merely 920 miles and a rate of climb of 34,400 ft/min. It did have an internal bomb capacity of 8,000 lb but its internal storage would only be used for a 365-gallon fuel tank. The Thunderchief, nicknamed the “Thud” by the pilots and crew who maintained it, was the only aircraft that was removed from combat because of the high losses – half of the fleet had been shot down or crashed.

Also read: The Vietnam Pilot Who Earned the MOH in a THUD

Today, some air historians consider the Ultra Sabre to be the best fighter aircraft the U.S. Air Force never bought.

We hope you enjoy the video below and we invite you to share this article with your friends and colleagues. If you like jet-powered aircraft then check out all our many other #JetFriday posts.