An Air of Superiority – The AIM-9 Sidewinder 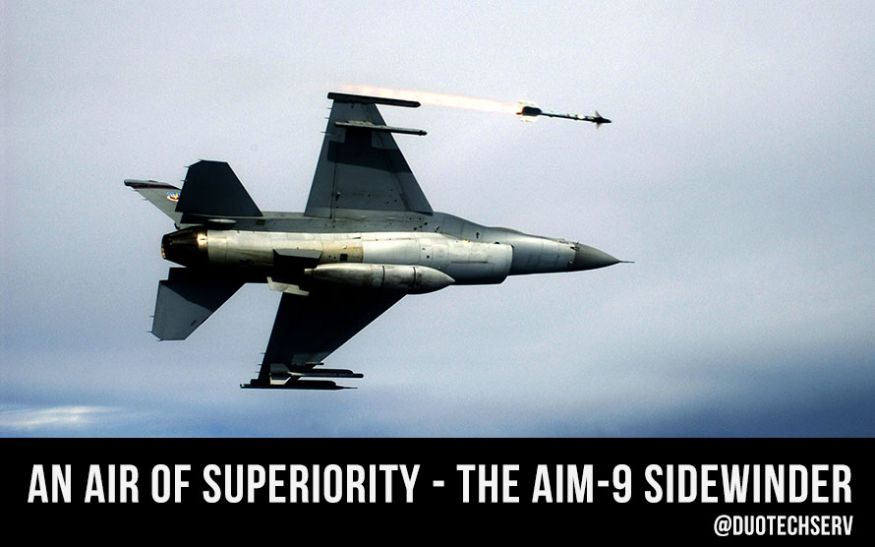 Two U.S. Navy F-18 Super Hornets patrol the skies fifteen miles out from a U.S. carrier group in the north Atlantic. It’s a training mission preparing the jet fighter pilots to safeguard the battle group’s perimeter during an upcoming deployment to the Indian Ocean. This simulation will focus on the interception of an unmanned military aircraft approaching the battle group.

On their radar, the pilots identify a fast moving drone eight miles away and traveling directly toward the strike group. They report its heading and range to the carrier’s combat direction center (CDC). The CDC then gives the command to intercept the aerial target. Within seconds, the F-18s catch up, identify the threat, and receive the order to take it out. Slipping in behind the drone, the lead aircraft’s pilot selects his Sidewinder air-to-air missile, gets a tone that the missile is locked on, and fires.

“Fox 2 away,” the pilot remarks, indicating launch of a heat-seeking missile.

Zipping out from the Hornet’s wing tip, the Sidewinder quickly finds its mark and swats the drone out the sky. Confirming the threat has disappeared, the two Hornets bank hard to starboard and head back to the carrier strike group. The AIM-9 Sidewinder is a heat-seeking missile used for air-to-air combat and carried by fighter aircraft and attack helicopters. This supersonic missile provides air attack capabilities to F-15, F-16, F/A-18 fighters and attack aircraft like the A-4, A-6, and the AV-8B. The Sidewinder can also be found in operation on the AH-1 Cobra helicopter.

The Sidewinder has a high-explosive warhead and a range of up to 18 miles, depending on the altitude. Its structure is divided into four main sections: infrared homing guidance section, active optical target detector, high-explosive warhead, and rocket motor. The AIM-9 homes in on the heat source of the enemy target, which is commonly the engine exhaust source. With the infrared seeker, the missile has “fire-and-forget” capability, allowing it to lock onto and hit the target while the firing aircraft takes evasive action or moves to engage another target.

Pictured is an AIM-9 Sidewinder Launcher Power Supply that Duotech repaired recently. The power supply provides an electrical interface between the aircraft and the missile as well as power for the missile electronics and gyro stabilization. The supply also amplifies the signal the missile sends to the aircraft fire control system regarding target information.

Duotech provides repair services of electronic components for a variety of fixed wing and rotary aircraft guidance systems, ground and airborne radar systems, and weapons systems like the AIM-9 Sidewinder and the AGM-114 Hellfire Missile.