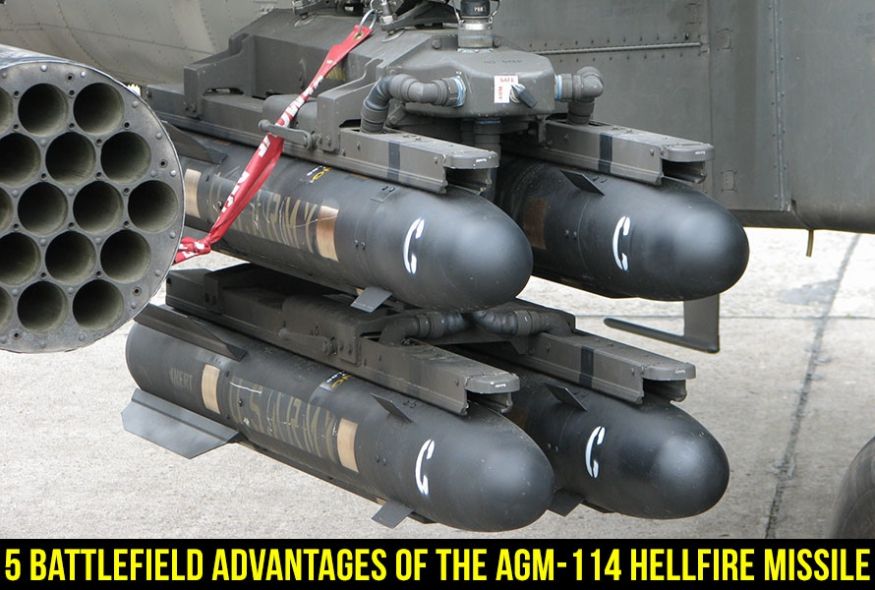 On a dry, hot desert evening, two forward observers from a U.S. Army Stryker Fire Support Team take cover on a hill one thousand yards away from an Iraqi T-72 battle tank. The tank is partially hidden under camouflage netting, providing defense for a small listening post just south of Baghdad. The U.S. soldiers are in possession of a laser designator. They call in air support and an AH-64 Apache is tasked with eliminating the T-72 with a Hellfire Missile. The soldiers mark the target with the invisible beam. From a safe distance away, tucked behind a hill and out of audible range of the tank, the Apache fires one AGM-114 Hellfire missile. Once launched, the seeker of this laser guided munition detects the soldier’s laser signal marking the target, guiding the missile directly onto the unsuspecting T-72, eliminating the threat.

As seen in the video below, the AGM-114 Hellfire Missile is an air-to-ground, or ground-to-ground, laser guided missile that provides heavy anti-armor capability for attack helicopters like the AH-64 Apache and the AH-1 Cobra. The Hellfire is an acronym for Helicopter Launched, Fire and Forget Missile. It is capable of multi-mission and multi-target precision strikes. Fire-and-forget missile guidance allows an aircraft to launch the munition without requiring line-of-sight of the target, which keeps the aircraft from otherwise vulnerable situations.

The laser spot can be projected onto the target from the launching aircraft, other aircraft, or from observers on the ground. With the ability to provide laser guidance system from a separate aircraft in the nose optics, from a hand-held device, or from a tripod used by ground observers, the firing aircraft can break line of sight, remaining protected after firing the missile.

Designed specifically for the AGM-114 Hellfire, the M299 Launcher provides the electronic and mechanical interface between the missile and the aircraft. The launcher can carry one to four missiles on a single hardpoint. With the adaptable launcher, the Hellfire missile can be launched from multiple air, sea, and ground platforms. Pictured above is a control head of the M299 Launcher mounted to a hardpoint of an attack helicopter as well as being serviced by Duotech Services. Duotech maintains an AS9100C registration and is a qualified repair station for hundreds of items. Learn more below about Duotech’s long term sustainment capabilities.

Watch a video below of The AGM-114 Hellfire Missile