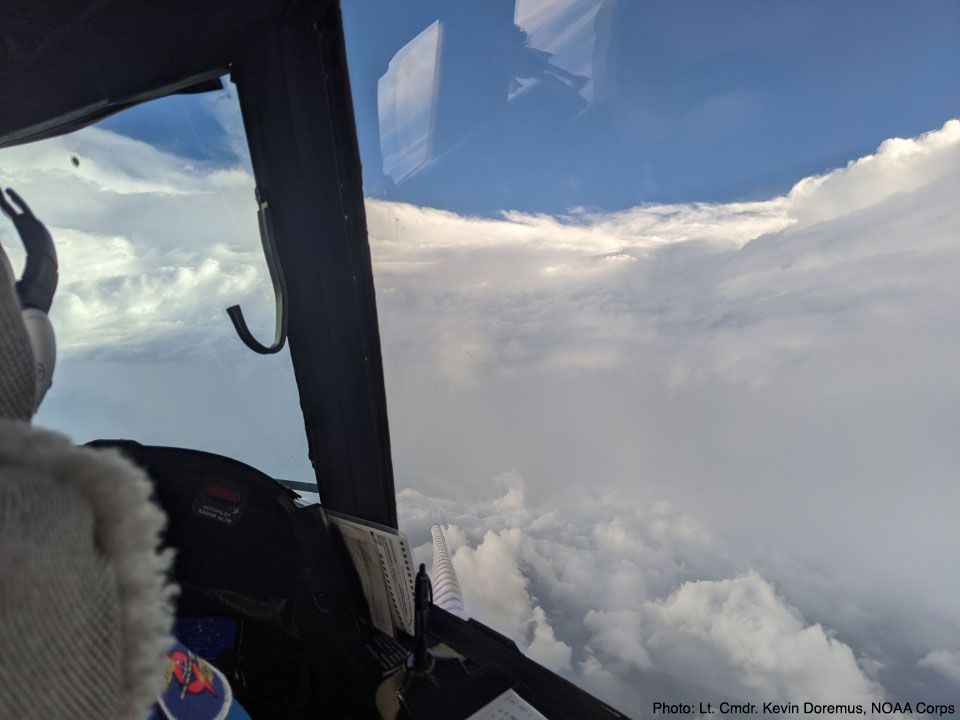 In the Atlantic Ocean, they are called hurricanes. In the Pacific, typhoons. When they are approaching the United States, not everyone is trying to avoid the storm. Some men and women jump into aircraft and fly directly into the storm…for science.

The extremely important role played by these high-flying meteorological stations is to collect data about the storm’s condition and strength. Forecasters use the accumulated data to improve their forecast models to better predict where a hurricane will hit and how much possible destruction. These models better prepare communities in the storm’s path.

Headquartered on Virginia Key in Florida, the Hurricane Research Division (HRD) of NOAA is responsible for gaining a better physical understanding and providing the most accurate forecasts of tropical storms and hurricanes. For over 60 years, the HRD has worked with scientists from all over the world to improve meteorological knowledge of these storms and to increase public safety.

NOAA operates the Lockheed WP-3D Orion, a weather reconnaissance aircraft. There are only two of these highly modified versions of the P-3 Orion. The WP-3D has three weather radars – one in its nose, one on its lower fuselage, and one doppler radar in the aircraft’s tail. Other specialized meteorological equipment include flight-level data sensors, cloud physics instrumentation, and remote sensors for surface wind and rainfall estimation.

One of the WP-3D’s expendable weather instruments includes the critical piece of weather equipment dropsonde deployment/receiver system. The cylindrical-shaped instrument is 16 inches long and 3.5 inches in diameter and weighs 2.5 lbs. At an interval of about every 400 miles over water, the instrument is released, and a small parachute slows and stabilizes its descent. As it descends, the device measures and sends information about the storm back to the aircraft using a high-frequency radio.

The 53rd Weather Reconnaissance Squadron, also known as “Hurricane Hunters”, provides tropical storm and hurricane surveillance in the central Pacific Ocean, Atlantic Ocean, the Caribbean Sea, and the Gulf of Mexico. Not only do they fly in hurricanes in the summer months but will also fly into winter storms on both coasts of the United States.

The Hurricane Hunters operate a fleet of Lockheed WC-130s, which is also a greatly modified version of its base aircraft, the C-130 Hercules.

The WC-130 is designed to withstand the battering high winds when penetrating the hurricane’s eye to collect high-density, high-accuracy weather data. It is operated by a crew of five: pilot, co-pilot, aerial reconnaissance weather officer, and the weather reconnaissance loadmaster and/or dropsonde system operator. The WC-130’s weather recon mission can last up to 11 hours and cover 3,500 miles, so it needs to carry plenty of fuel and meeting up with an aerial fuel tanker is not practical around the storm. It maintains endurance with two 1,400 gallons external tanks and one internal 1,800-gallon tank.