“What Does That Button Do?” A Fighter Pilot Identifies F-15 Cockpit Controls 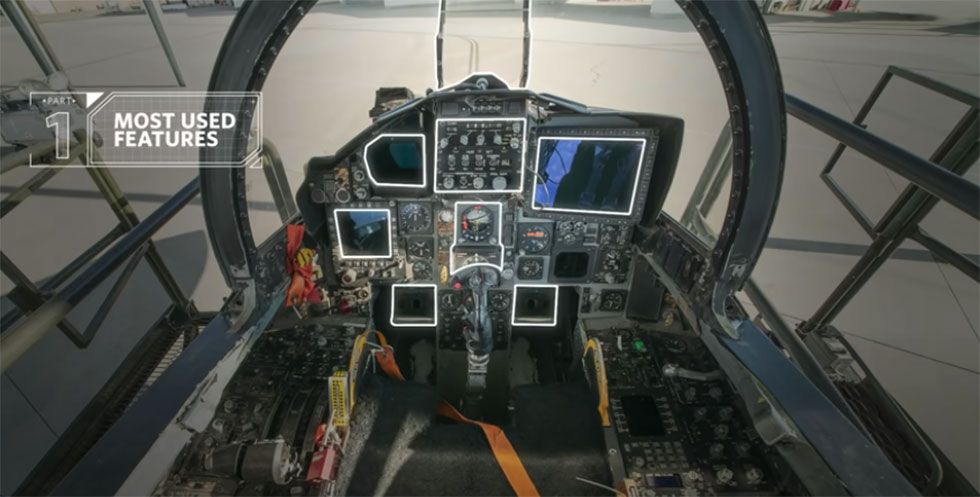 The F-15 fighter jet is an all-weather tactical fighter that is highly maneuverable with superior acceleration. Even though it was introduced in 1976, this twin-engine jet is still one of the U.S. Air Force’s top air superiority fighter jets. It has an impressive record in aerial combat with 104 victories and 0 losses. Besides the United States, the F-15 Eagle is also flown by Israel, Japan, Singapore, South Korea, and Saudi Arabia. The majority of the F-15 victories were scored by Israel.

The F-15 has a phenomenal thrust-to-weight ratio and a low wing-loading ratio that helps it make very tight turns without losing airspeed. The two turbofan engines produce 23,450 pounds of thrust each engine, powering it to speeds in excess of 1,800 mph. Its mission is to gain and maintain air superiority. It does so by carrying 940 rounds for its six-barrel cannon and eight air-to-air missiles carried externally. It has a ceiling of 65,000 feet and a range of 3,450 miles.

As much as the Eagle possesses speed and agility, it also provides the pilot some of the best technology possible in an aircraft that is over four decades old. Boasting a powerful radar and highly advanced avionics systems, all managed from a well-designed cockpit, the F-15 team of pilot and plane are nearly impossible to beat.

Duotech Services’ Director of Strategic Programs, Archie Rippeto, is a retired Lieutenant Colonel of the USAF with over 3000 flight hours in the F-15 Eagle. He provided his thoughts on the Eagle and its avionics components.

“During my time in the military, I flew the F-15 A/B/C/D over 3000 hours. I started flying the F-15 early in 1981 and had an opportunity to enjoy the amazing jet for many years. The F-15 was built around a very capable radar with many features to support the total weapons system. While the early versions were fairly antiquated compared to today’s advanced radars, it was a significant step above past air-to-air radars. Additionally, as seen in the video below, the aircraft incorporated a well thought out layout, HOTAS, HUD system, and other features to make the pilot become more effective in employing the jet.

I was able to attend the Air Force Fighter Weapons School and eventually instruct at the school. This gave me the opportunity to be very involved with upgrades that were made over the years to the F-15. The first version I flew only used a 24K computer to support the radar functions. Over time, multiple upgraded mission computers were developed with much better processing capabilities, which allowed for significant improvements in radar performance and additional advanced modes. While basic radar theory is still the same, faster processing of data and better integration with other avionics have made the F-15 of today a significantly improved weapons system. The most significant improvement was the transition to Active Electronically Scanned Array (AESA) version of the radar.

As I mentioned before, basic radar theory has not changed, but technology continues to improve to allow for more effective radar components and processing capability to improve radar performance, reliability, and cost. Duotech’s radars capitalize on leading-edge technology and lessons learned to provide high performance, cost-effective mechanically scanned (Nemesis), and AESA (ARES) radars.

The record of the F-15 speaks for itself. I was very fortunate to fly the F-15 and watch the significant improvements that were made to the radar and weapons system over the years. It continues to amaze me what can be done with much smaller, reliable systems, such as those used in Duotech radars.”

If you enjoyed this video below, please share it on your social media channels for your family and friends. If you’re like us and love jet aircraft, check out our Jet Friday posts.