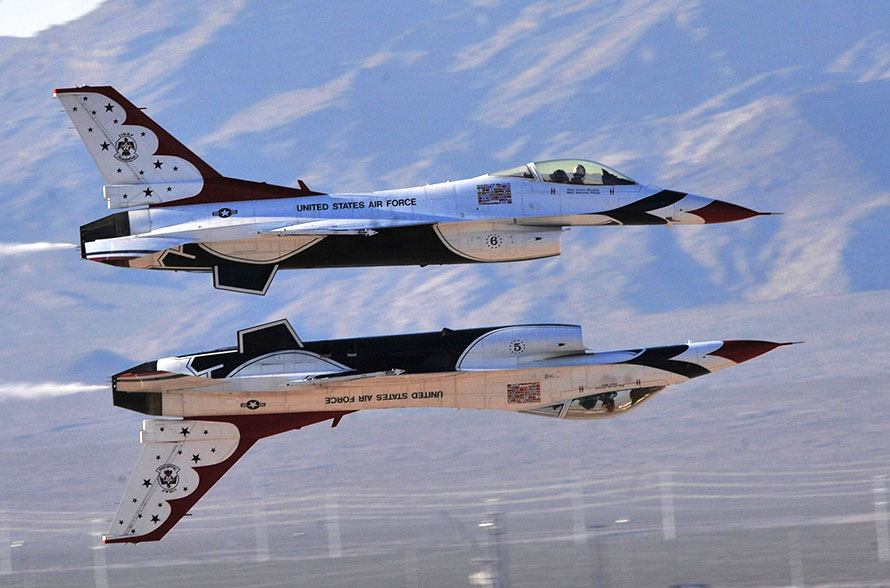 The F-16 Fighting Falcon is a 40-year-old fighter aircraft that was designed to win and maintain air superiority. Its designers developed innovative technology for the time, like the pilot’s seat that is elevated and set at 30 degree incline to enable the pilot to make tighter turns than his potential adversaries, surviving up to 9-Gs. The frameless bubble canopy provided the pilot with a 360 degree view to improve situational awareness. The control stick, set to the pilot’s right side versus a traditional middle stick, provides arm support during those high-G turns. The Falcon, also known as the Viper, was the first aircraft to utilized a fly-by-wire flight system that reacted more quickly and precisely to pilot input, thus making the Falcon made it a feared and formidable opponent in the air.

These improvements in technology not only set the F-16 apart from past and present adversaries but also made this aircraft one of the best platforms for aerial demonstration teams like the United States Air Force’s Thunderbirds. These professionals will maneuver their aircraft at speeds around 450 mph while squeezing in as close as 18 inches between their fuselage and canopy. The F-16 and the Thunderbirds do not disappoint crowds across the country who attend one of the many air shows they participate in every year.

The Thunderbirds have been performing aerobatic formation flights since their birth in 1953. Of course, it hasn’t always been in the F-16, which was only introduced in 1978. The Thunderbirds originally flew the F-84 Thunderstreak. Over the decades, they transitioned through the F-100 Super Sabre, F-4 Phantom II, and the T-38 Talon. The Thunderbirds began to utilize the F-16 in 1983. It takes more than the pilots to get this demonstration team into the air. The Thunderbirds team consists of 12 officers and 120 enlisted support personnel. They are headquartered in Las Vegas, Nevada at Nellis Air Force Base.

This video below is a demonstration of the pilot’s ability to manipulate the F-16 into tight twists and turns of maneuvers called Diamond, Stinger, Echelon, and Five Card. Each year the Thunderbirds are part of the Air Force Academy’s commencement ceremony with a flyover timed to coincide with the cadets throwing their hats into the air.

Strap in and enjoy the video from the spectators’ view and inside of the F-16 Fighting Falcon cockpit. If you enjoy this video, please share our page with your friends and colleagues. If you like jet-powered aircraft then check out all our many other #JetFriday posts.