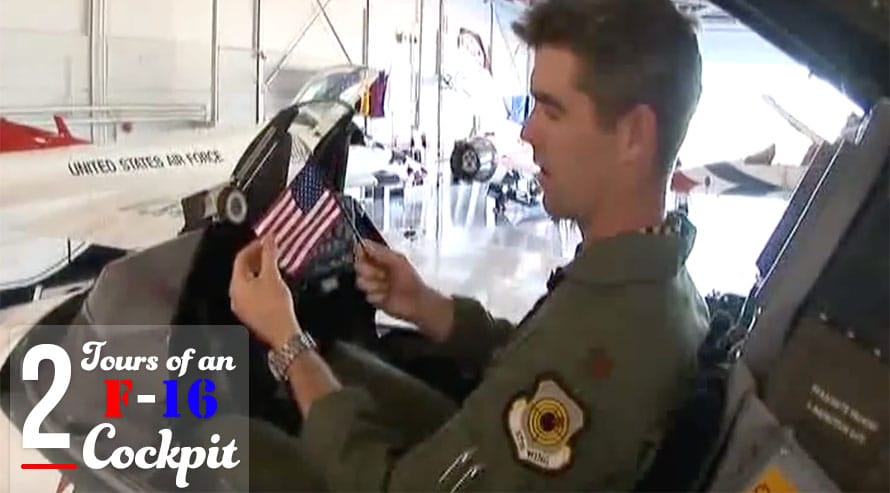 Ever wanted to see the inside of an operational jet fighter cockpit? More than that, are you interested in having a professional explain what this stick controls and what action that button performs in one of the most successful fighters in the world, the F-16 Fighting Falcon?

Below are two videos by two different Viper operators, both have since moved onto different missions than when these videos were produced. One was a Canadian test pilot, on an exchange program with the U.S., and assigned at the time with the 416th Flight Test Squadron at Edwards Air Force Base. The second was a demonstration pilot with the United States Air Force Thunderbirds.

Both videos demonstrate how snug the F-16 Viper cockpit. As you will see, the Viper’s seat is tilted 30 degrees back, armrests for support are made available, and the locations of the stick and throttle are all positioned to accommodate the stress of high-G maneuvers. The F-16 was developed to be an air superiority aircraft and is built to perform tight turns with the pilots surviving up to 9-Gs.

As for the throttle and stick of the F-16, they are capable of not only guiding the aircraft, but also contain multiple switches, levers, and buttons to manage many of the aircraft’s systems. Known as Hands On Throttle and Stick (HOTAS) it is the F-16’s primary flight controls enable a pilot to control nearly every flight and weapons function necessary during a dogfight without removing their hands from those controls.

The Thunderbird video identifies some of the adaptations they have incorporated into their aircraft for their highly choreographed performances. For one, the pilot points out a switch on the throttle that has been reassigned to turn on and off a smoke stream while flying. Also, in the Thunderbird aircraft, the pilots attach a stopwatch next to the HUD to help them coordinate their locations during the demonstration flights. It’s important to be at a certain spot at an exact time when so many other fast movers are in the air with you.

So sit back and enjoy the two videos from the inside of the F-16 Fighting Falcon cockpit. If you enjoy this video, please share our page with your friends and colleagues. If you like jet-powered aircraft then check out all our many other #JetFriday posts.

Download our FREE infographic, “F-16 Fighting Falcon By The Numbers”