The Vietnam Pilot Who Earned the MOH in a THUD 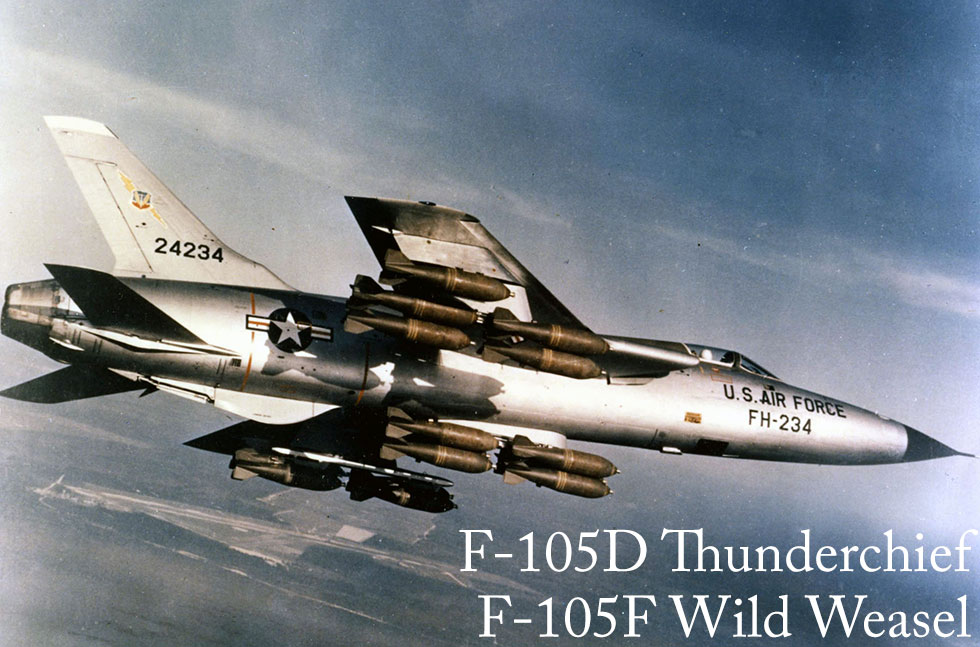 The F-105 Thunderchief project began in 1951 and was introduced into service in 1958 as a replacement for the F-84F Thunderstreak fighter-bomber. The single-seat Thunderchief was a fighter-bomber capable of near Mach 2 and originally developed to be a nuclear attack aircraft. Though armed with a rotary cannon and capability to carry missiles, the F-105 was designed to fly fast at very low altitudes, penetrate contested air space under the radar, and deliver a nuclear payload housed internally. It was nicknamed “Thud” by the pilots and crew who maintained it. The origin of Thud is unclear but some attribute it to either the sound the F-105 makes when it crashed, the sound of the bombs hitting the ground, or possibly to a character on Howdy Doody Show, Chief Thunderthud.

A Thunderchief pilot stated the F-105 could fly “860 knots on the deck, well above the speed of sound. Trouble with going so fast so low is that the canopy starts to melt. We had a double canopy, with coolant between the layers.” 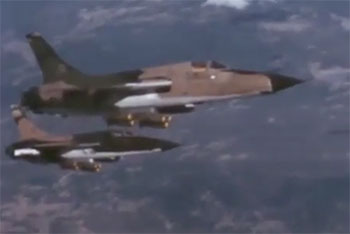 When the F-105D served in Vietnam, its primary mission was to deliver heavy bombs against all military targets. Many different aircraft made the dangerous journey north to strike targets around Hanoi. With the United States operating huge bombing campaigns in North Vietnam targeting infrastructure and war supporting facilities, American military aircraft were seeing big losses due to the North’s heavy use of Soviet-built SA-2 Guideline surface to air missiles (SAM) sites. To counter this, the U.S. needed an aircraft dedicated to locating and destroying the SAM sites so that American aircraft could get through to their bombing missions.

The F-105F Wild Weasel was a two-seater variant developed to destroy enemy air defense systems in North Vietnam. Outfitted with more advanced radar, heavier armament, and extensive electronic countermeasure equipment, it performed its mission by baiting the SAM site to target the Wild Weasel. When the SAM gave its position away, the F-105 would jam the enemy’s SA-2 radar and destroy the surface-to-air missile sites.

During the air campaign against North Vietnam called Operation Rolling Thunder, which began March 1965, the US Air Force had been using the F-105 extensively to conduct air attacks. Its other mission was as a strike support fighter/bomber. The Wild Weasel motto was “First In, Last Out.” This was because the F-105F would be sent ahead of a large strike force to suppress the enemy’s air defenses. They would remain in the area continuing to performing the same mission while the strike conducted its mission and left.

One such mission resulted in the award of the United States’ highest decoration, the Medal of Honor. On March 10, 1967, Captain Merlyn Hans Dethlefsen and three other F-105 pilots were the lead strike force headed deep into North Vietnam. Behind them would be a much larger strike force that would attack a very important North Vietnamese military-industrial target, the Thai Nguyen Steel Works. This target was so important to the North that it was protected by a defense ring made up of 85mm anti-aircraft guns, surface-to-air missile batteries, and the air was patrolled by MiG-21 fighters. Captain Dethlefsen and his flight of F-105 were very much outgunned.

The four-plane flight made its first pass over the heavy defenses and the flight leader was shot down by 85mm fire. The two man crew, Lt. Commander David Everson and Captain Jose Luna were taken prisoner and would be held as POWs until their release in 1973. Everson’s wingman aircraft was severely damaged and it had to withdraw from the fight back to the base. That left Dethlefsen and his wingman, who took over command of the flight.

As Dethefsen was attacked by MiG-21s and heavy flak, his aircraft was damaged. He determined he could still fly and, instead of withdrawing, continued the attack, making several passes on the NVA defenses. He evaded supporting MiG-21 fighters by flying directly through the enemy’s heavy anti-aircraft flak while his plane continued to accumulate damage. He pressed on, making multiple passes knowing that the main strike force was on its way and the SAM sites and AA guns needed to be eliminated. Diving through the smoky haze from the gunfire and despite his F-105 being crippled by flak, he finally located the SAM site. One pass he hit the Sam guidance radar with his anti-radiation missile. He then made one more pass through while strafing with the 20mm cannon fire to eliminate anything that remained before finally withdrawing back to base 500 miles away. Due to his persistence in pressing the attack against the North Vietnamese strong defenses and despite his badly crippled aircraft, Dethefsen’s determination helped make the follow-on strike mission of 72 fighter-bombers a success.

During the Vietnam War, the United States lost 330 F-105s in combat and 62 in non-combat related incidents. It was the only American aircraft to have been removed from combat due to high loss rates. Even after its withdrawal from combat in Southeast Asia, the F-105 Thunderchief would continue to serve the United States. The remaining Thunderchiefs would be transferred to the Air Force Reserves and Air National Guard units. Due to its aging airframe and that it was becoming more difficult to maintain, the F-105s would be steadily replaced until its official retirement in 1984.

The F-105’s replacement, the F-4 Phantom II, would serve for more than 60 years in the United States Navy, Air Force, Marine Corps, and eleven other countries. With aging aircraft like the F-4 Phantom, keeping the airframes mission-ready requires identifying reliable, cost-effective component lifecycle solutions for electronic, mechanical, and electromechanical systems. Even with tight funding, the F-4’s electronic systems like the AN/APX-100 Identifying Friend or Foe (IFF) Transponder, as well as the aircraft’s other radar, communication equipment, and weapons systems must be maintained to ensure mission-critical components are ready to keep those fighters in the air.

If you enjoy these videos, please share our page with your friends and colleagues. If you like jet-powered aircraft then check out all our many other #JetFriday posts.

F-105 Thunderchief | Behind the Wings