How RADAR Detect, Track, and Attack Through the Clutter 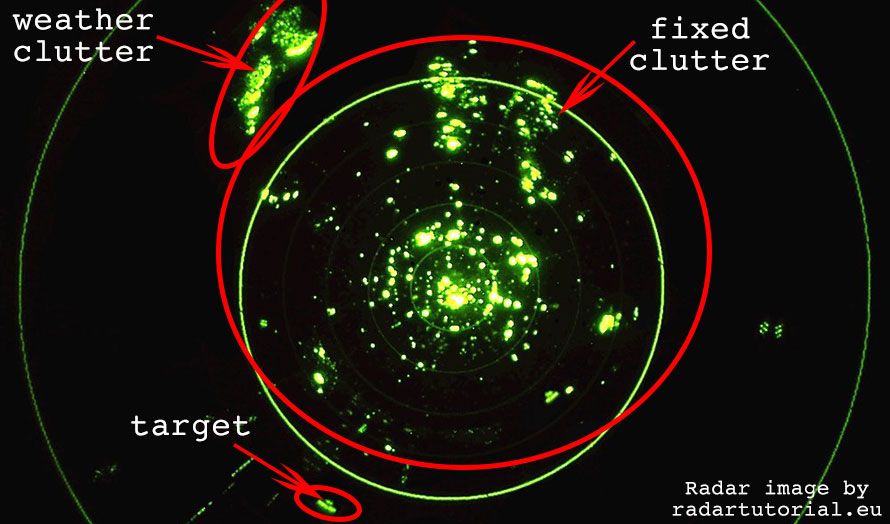 When a fighter jet moves through the sky in a hostile environment, the pilot needs to know of any possible threats that may be in their zone of operation. To gain the element of surprise, a pilot must be able to spot the other aircraft before they see him. To see the other aircraft Beyond Visual Range (BVR), the pilot’s aircraft needs a radar with such capability. 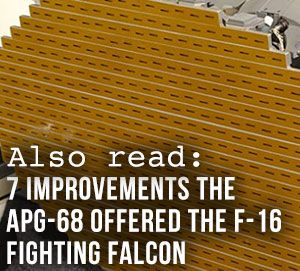 Flying at 25,000 feet, a fighter pilot needs to be able to identify threats that are moving below him. The RADAR needs to not only detect a possible target but also track that target. There is a lot going on when you look down below the horizon–trees, hills, buildings, ocean waves, animals, and even rainy weather. How does the radar distinguish between an aircraft and all the other ‘stuff’ going on below? Today, we will take a high-level look at what radar is and how a radar system sees through all the things that can distract it from seeing other aircraft.

RADAR stands for Radio Detection And Ranging. A radar system detects other aircraft, ships, or other objects and the speed and direction in which they travel by sending out a pulse of high-frequency electromagnetic waves. This pulse goes out ahead of the aircraft until it encounters an object and reflects off of it. The signal then returns to the radar’s antenna for processing.

Watch this video by James May “How Does RADAR Works?”

As James May explains in the video to the left, if you stood on a cliff and yell toward another cliff, the sound would return to you after bouncing off the wall. If you pick the right location and yell in the direction of multiple cliffs situated at different distances away from you then your voice could return from multiple points, causing an echo. The farther away you get, the longer it takes for that yell to bounce off and return. Radio waves are like these sound waves. More on the history of the radar included in James May’s video. When an aircraft’s radar is scanning for threats over land or sea, it has to deal with clutter. Clutter can be anything from trees, ground, ocean waves, anything that can produce an unwanted echo return to the radar. Clutter can also be weather/rain, animals, chaff, and atmospheric turbulences. This clutter sending back signals makes it difficult to find the target you really want to detect. To understand how clutter is separated from a target, we first learn about the Doppler Effect.

As noted by ThePhysicsClassroom.com, “The Doppler effect is observed whenever the source of waves is moving with respect to an observer.” Sheldon Cooper of The Big Bang Theory gives us a more technical description: The Doppler Effect (or Doppler Shift) is the change in frequency or wavelength of a wave (or other periodic events) for an observer moving relative to its source.

“The Doppler Effect and Shock Waves” by The Physics Classroom

To continue with simple explanations, we use an example of a police car. Let’s say you are standing on a corner and you hear a police car blaring its siren driving in your direction. As the siren gets closer to you, it’s pitch will sound higher than it would if the car sat stationary. As the police car approaches, passes, and then moves away from your location, the pitch will go from higher to lower.

For a visual example, observe a water bug on a puddle. As the bug moves its legs in a stationary spot, the waves created from that movement will move away from the bug in equal distance. If the bug chooses a direction to move then those waves in front of the bug will move away from it but will be closer together than the waves moving away behind the bug. The same is true for radio waves. When any object moves, it creates frequency waves. The faster it moves the higher the frequency waves are in front of it and the lower the frequency waves are behind it. This change in frequency is what is referred to as Doppler Shift. The faster or slower it moves in relation to the radar detector also affects the frequency.

When an aircraft’s radar system sends out a pulse, it can detect an object out in front once the signal returns. It can send another pulse and tell if it’s closer or farther by how long it takes the pulse to return based on the aircraft’s own location. It’s an effective way to determine an object’s location, but much slower than taking advantage of the doppler effect.

A pulse-Doppler radar is a radar system that determines the range to a target using pulse-timing techniques and uses the Doppler effect of the returned signal to determine the target object’s velocity.

If an object has a higher or lower frequency based on its direction of travel and speed in relationship to the radar, then sending out a pulse can tell you more about the object when it returns. This is much faster and allows the radar to scan quickly and identify many different targets, their direction, and their speed. When the signal returns to the radar it is passed through the system’s frequency filters. These filters sift through the signal and separate the information for processing. Depending on what the pilot has designated that the radar monitor or scan for, then the proper targets are sent along through the system and delivered to the pilot’s HUD and monitors. Separating out the signal to find the target(s) among the clutter is similar to using a coin separator. If you have watched one in operation you know that by taking a handful of coins and dropping them into a slot, depending on the size of the coin, the container distinguishes where the quarter, dime, nickel, and penny get dropped.

The first Pulse-Doppler radar, the AN/ASG-18, had Look-down/shoot-down capability, meaning it could detect, track and guide a weapon to an air target moving below the horizon as seen by the radar. Because of the pulse-doppler capability, the radar was able to distinguish between a true target from ground and weather clutter. The ASG-18 could only track one target at a time. Many pulse-doppler radars followed the ASG-18 prototype. They became more advanced, offering the pilot more options, better range, and could tracking multiple targets simultaneously.

One of these was the F-16 Fighting Falcon original radar system, the APG-66 Pulse-doppler Radar. This radar has Look-down/shoot-down capability, meaning it can detect, track, and guide a weapon to an air target moving below the horizon as seen by the radar. This is dependent on the pulse-doppler capability to distinguish between moving and non-moving targets while ignoring ground clutter and noise. There are different line replaceable units (LRU) that make up the APG-66 system. These LRUs listed below each have a different function in order to distinguish targets, whether above the horizon, or below the horizon where the ground, buildings, animals, and even weather can create noise and clutter.

The TRANSMITTER is the electronic unit that amplifies the radio frequency alternating current. The pilot may select among four of the 16 available operating frequencies in the F-16, depending upon configuration. This RF current is transferred to the antenna. The ANTENNA transmits and receives the RF pulse. The LOW POWER RADIO FREQUENCY (LPRF) generates the RF transmit signal processes the analog data from the return signal. The LPRF also contains analog/digital converters and provides frequency agility for certain air-to-surface modes. Eliminating the clutter and other unwanted signals take place in the DIGITAL SIGNAL PROCESSOR (DSP). The RADAR COMPUTER configures the radar system for the various operating modes, tells the DSP to provide symbols for video output, performs the calculations, routes data to the Fire Control Computer FCC, and interfaces with the F-16 avionics system for pilot operation.

The F-16 Falcons have also been upgraded to the APG-68, which provided the Falcon with 7 Major Improvements. One of those improvements is the addition of 25 operating modes. These additional operating modes include ground mapping, ground moving target mode, specialist ship mode for maritime operations, and track-while-scan of up to 10 targets simultaneously. Without operational radar systems, a pilot is essentially blind in the sky, especially in poor visibility and high ceilings. Take away the fire control radar and pilots are unable to detect or engage air and ground targets. It is essential that a fire control radar be dependable and effective in a combat environment and in less-than-ideal weather conditions. The latest version of the AN/APG-68 is version 9, or APG-68(V)9. It provides the Fighting Falcon with a 30% greater air-to-air detection range than its predecessor. It is equipped in the F-16C/D Block 50/52 variants for several nations worldwide. Backed by 34 years of industry experience and with AS9100C and ISO 9100 certifications, Duotech is a leading source in providing responsive repair and support for your APG-66 and APG-68 Fire Control Radars. Duotech can also upgrade your current APG-66 and APQ-159 with the Delta Radar Upgrade.