It’s about the carrots, or at least that’s what the propaganda said.

Have you heard that carrots are good for the eyes? It’s been passed along by moms for decades. The vitamin A and beta-carotene are fantastic for healthy eyesight. But, when did carrots and great vision become closely associated? When it came to propaganda to hide technology during World War 2. 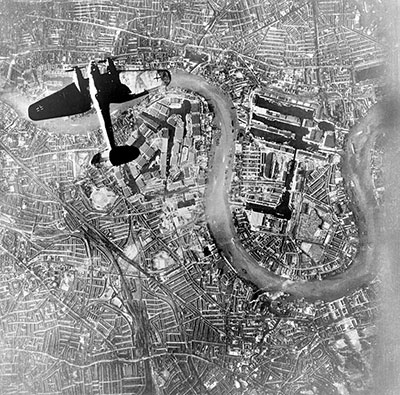 In 1940, during the Battle of Britain, the Germans began a bombing campaign nicknamed “The Blitz” by the British press. The Blitz was Germany’s attempt with the German Luftwaffe to destroy Britain’s ability to wage war by attacking the cities and industrial complex of Great Britain. Fortunately, the Luftwaffe was unable to locate their targets because of poor intelligence. Therefore, they were less than successful in destroying factories and airfields.

The English had a newly implemented tool on their side, the Chain Home Radar. This early warning system was the solution Britain needed for the defense of London. In 1935, plans were put in place to build a network of radio towers 20 miles apart along the east coast of Britain, and by the summer of 1937, they were in place. With the early warning of approaching aircraft, fighters could then launch and intercept German bombers well ahead of their intended targets.

With the Germans facing heavy losses during the daytime bombing campaign, the decision was made to switch the strategy in 1940 to nighttime bombing raids. The second part of this shift was also focusing more on Britain’s industrial cities, London becoming the biggest target.

With raids coming at night, the British used the CH Radar to identify when the Germans were attacking and from what direction. When Britain’s pilots got into the air, they needed to intercept the incoming bombers. At night, it’s not as easy to see the incoming bombers. This allowed more of the bombers to get through and strike targets in Britain.

First Use of Airborne Radar To Down a Plane

The Chain Home Radar (CH Radar) could still detect the incoming German bombers, but unless British pilots could make visual contact with the Luftwaffe aircraft, there was not much England could do to stop the attack. The CH Radar operators would be given direct reporting to the pilots of the aircraft who were attempting to intercept the German bombers. On the night of July 22, 1940, a CH Radar operator guided a Bristol Blenheim Light Bomber close enough that the observer was able to visually see the German Do 17 light bomber. The British pilot attacked and shot down the Do 17, becoming the first confirmed successful use of airborne radar.

Though the teamwork between the CH Radar operator and the Blenheim pilot was successful, it was clear that a better solution was needed. To address this problem, Great Britain began designing a radar system that was light (less than 20 lbs) and small enough that it would fit in an aircraft. The radar that developed from these requirements was the AI Mk. IV radar. It was the world’s first operational air-to-air radar system. It first appeared in 1940 in a Bristol Beaufighter, a heavy fighter aircraft with a crew of two, a pilot and an observer. With the help of the Chain Home Radar to get it in generally the right location, the AI Mk. IV could then guide the pilot to the targets. The AI Mk. IV had a range from 400 to 18,000 ft. With the Beaufighter’s use of radar, it’s powerful engines to chase down a target, and the weapons that could deliver heavy damage, it would play a big role in ending the Blitz nighttime bombing campaign during the Battle of Britain. 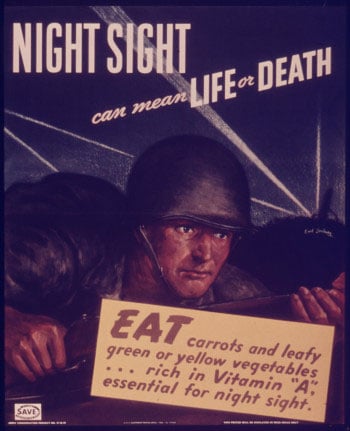 One of the many advertisements that appeared during WWII that encouraged the consumption of carrots for help seeing during the blackouts. (Image courtesy of Flickr user US National Archives Bot)

In order to conceal the fact that Britain was using this new top-secret air-to-air intercept radar to locate the German fighter bombers at night, England began a propaganda campaign about carrots. The campaign centered around the success of Royal Air Force (RAF) pilots like Flight Lieutenant John “Cat’s Eyes” Cunningham who, like other RAF pilots, could find their targets at night easily because they ate lots of carrots, giving them great night vision. During the Battle of Britain and the nighttime raids, the country was always under blackout conditions. The children were told to see better in the dark, “eat your carrots.” To this day, mom’s around the world tell children to eat their carrots for better eyesight.

Installing a radar system into an aircraft was one of the most important advances in aviation there has ever been. Following WWII, radar systems continued to advance beyond just the capability to identify the location of what is in front of the aircraft. Through the decades, the radar would evolve from locating a single object to locate and track multiple objects simultaneously, lock-onto, and guide a weapon onto a target, among many other functions.

Originally introduced into service in 1962, the F-5A Freedom Fighter, intended as a daytime air superiority fighter, went into service without a radar system. In an upgrade that would make it more appealing to American allies, the F-5E Tiger II would eventually be equipped with an APQ-153. The APQ-153 was an I band pulse-doppler radar system and had a range of 10 nautical miles. It utilized a small parabolic dish to fit the cramped confines of the Tiger II. It was limited to air-to-air target search, a “dogfight” mode, and missile bore-sight cueing for the proper engagement envelope for the AIM-9 Sidewinder air-to-air missile and help guide the pilot into that envelope.

The APQ-153 could be upgraded to the APQ-159. Unlike its predecessor, the -159 was both I and J band radar system. The APQ-159 had a planar phased array antenna, making it smaller than the parabolic dish, allowing it more room inside the nose, increase the angles it could point. The -159 had a range of 20 nautical miles, double that of the -153, and greatly improved reliability. With this more powerful radar system, the F-5E could fire both the AIM-9 Sidewinder and the AGM-65 Maverick air-to-surface missile.

The F-16A/B Fighting Falcon was introduced into service in 1978. It originally had a pulse-doppler radar system with a mechanically scanned array antenna known as the APG-66. The -66 had a range of approximately 93 miles. This solid-state medium range fire-control radar had a mechanically scanned slotted planar array with look-up and look-down/shoot-down modes, even in cluttered environments.

Upgrading the F-16 C/D Block 25 with the APG-68 would provide double the scan range at 184 miles. With Synthetic Aperture Radar (SAR) capability, the APG-68 would include high-resolution ground-mapping. The -68 would allow the pilot to identify moving targets on the ground, track targets at sea, and tracking 10 targets while continuing to scan.

The APG-66 and APG-68 both have modes for daytime or evening combat, even in bad weather. The F-16 Fighting Falcon currently remains in service with the United States Air Force and other countries around the world. Today, Duotech Services offers upgrades for the F-16 APG-66 and 68 radar systems which include Delta Mechanically Scanned Antenna Radar Upgrades and the ARES Active Electronically Scanned Array Radar.

Radar systems have come a long way from the first used as a simple but very important aircraft-interceptor radar system to stop the night time bombing of the United Kingdom to today’s AESA radar systems found in the newest, smartest aircraft. Today they not only allow a pilot to intercept and engage a target but can also pass that radar information over to another friendly aircraft so that pilot sees the same information for their mission. With radars becoming more efficient at finding the aircraft, aircraft are getting better at hiding from those radar threats using stealth capabilities.

DSI is a qualified FAA Repair Station and maintains AS9100D and ISO 9001 certifications with the scope of repair, design, production (including CNC machining and laser cutting), testing and overhaul services for electronic and electro-mechanical equipment for military and commercial applications. Duotech has the capability to repair the mission-critical electronics systems of the F-5 Tiger II and F-16 Fighting Falcon aircraft.