Barrel Roll Over A Russian Bear 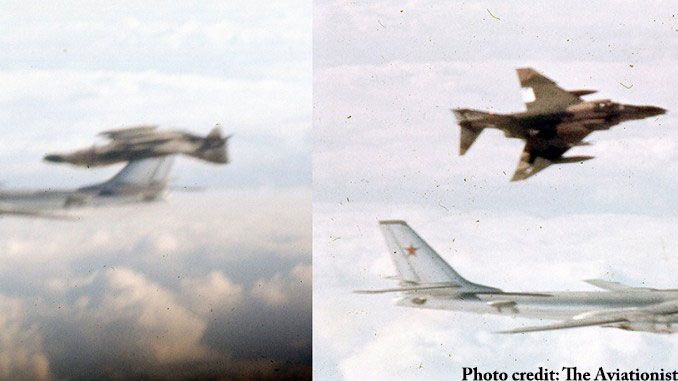 In 1986, we had TOPGUN the movie, an action drama about Naval aviators attending the United States Navy Strike Fighter Tactics Instructor program commonly referred to as TOPGUN. In it, the star Maverick, played by Tom Cruise, explains to an astrophysicist civilian consultant to TOPGUN that he was inverted and in a negative-G dive with an enemy MiG-28 fighter aircraft. As exciting as that movie scene might seem listening to Maverick describe his nerves of steel while performing aerobatic maneuvers upside down within feet of a MiG-28’s canopy, the possibility of it occurring outside of a script is very unlikely. It does add drama to the movie and sets the plot for the remainder of the movie.

But in the early 1970s, an even more radical maneuver occurred over the North Atlantic. It did not pit an F-14 Tomcat together with a MiG-28 like in TOPGUN. Instead, it involved an F-4 Phantom and a Soviet Bear Strategic Bomber.

In 2017, a blurry photo of an F-4 Phantom inverted next to a Russian Tu-95 Bear was shared by TheAviationist.com. With the image was an article that described a few different dangerous intercepts with Russian fighter aircraft and U.S. patrol aircraft in international airspace. One instance was a Russian Su-30 that passed dangerously across to the nose of a United States P-8 Poseidon. The F-4 image was used as an illustration that intercept missions can go across the line on any side. In fact, hearing from a retired USAF Lt. Col who was present, this real-life TOPGUN maneuver occurred often.

The blurry photo drew some attention and went viral on social media. Eventually, the image was shared enough that it reached Robert M. Sihler, the individual who took the photo. In an email from Sihler to The Aviationist, Sihler provided details about that photo he’d shot and a little history of the United States’ North Atlantic intercept missions.

In the email, Sihler pointed out to The Aviationist, “Although I don’t remember the exact date, the mission occurred in either late 1973 or early 1974. The F-4C belonged to the 57th FIS at Keflavik NAS. The mission was a standard intercept of a “Bear” by two F-4s after the alert crews were activated.”

At the time of his career that he took the photo, Sihler was training as a Weapons System Officer (WSO) in the F-4 while stationed in Keflavik, Iceland. While there, his unit regularly intercepted the Soviet aircraft as they traveled between Russia and Cuba.

He continued by saying, “At that time, we probably averaged two intercepts of “Bears” per week. They were the only aircraft we saw while I was there. Generally, the intercepts occurred on Fridays and Sundays, at the “Bears” flew from Murmansk to Cuba on training and, we guessed, “fun” missions. Generally, we did these barrel rolls at the request of the Soviet crew members.”

The Soviets Requested It… [read the rest of Sihler’s story on theAviationist.com]

Below you can watch the video, F-4 Fighter Does a Barrel Roll Around a Soviet Bomber to hear the story also.

Also, read Duotech’s “F-4 Phantom – From the Beginning of Its Life Cycle”

F-4 Fighter Does a Barrel Roll Around a Soviet Bomber