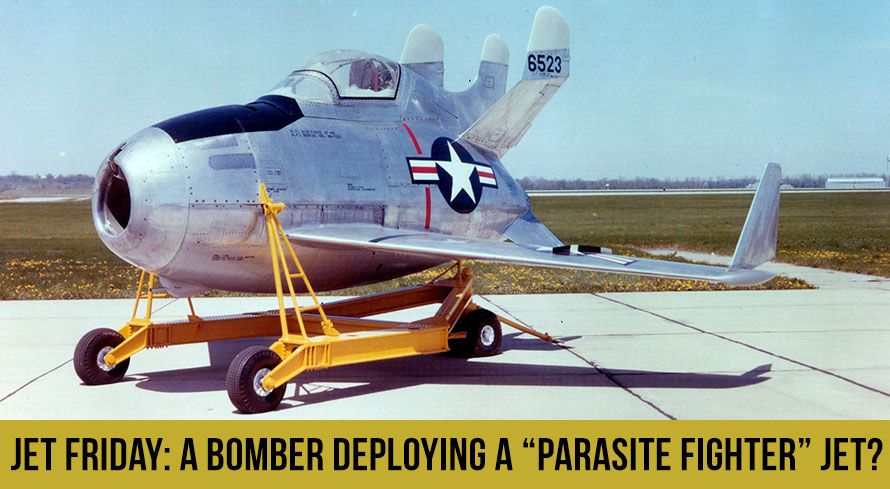 Click for Video – During the cold war, many countries, including the U.S., experimented with small fighter aircraft that could be deployed from large bomber aircraft to offer those bombers protection during long range missions. The need for such aircraft was based on the limited range of bomber escort aircraft compared to greater range of the bombers in development at the time. The American attempt was the prototype designated the McDonnell XF-85 Goblin.

The Goblin’s intended role would be to defend a bomber by intercepting hostile aircraft on long range missions. In order to accomplish this goal, the fighter would need to be very small to deploy from within the bomb bay, intercept incoming hostile jets, and then return to the bomber, dock with a trapeze hook-up, and subsequently secured inside the bomber. This small fighter jet was referred to as a parasite aircraft.

The Goblin had only four .50 caliber machine guns and a small engine. Testing would prove that the jet would be inferior to the aircraft it would face in combat and docking with a trapeze on the bomber was extremely difficult. As a result of the performance findings from many tests and the multiple failures of the dock, USAF terminated the XF-85 program on 24 October, 1949 after only two prototypes were constructed.

Below is video footage from the Goblin’s prototype testing. In the film, you will witness one of the few successful dockings the aircraft completed. Here’s to Jet Friday!