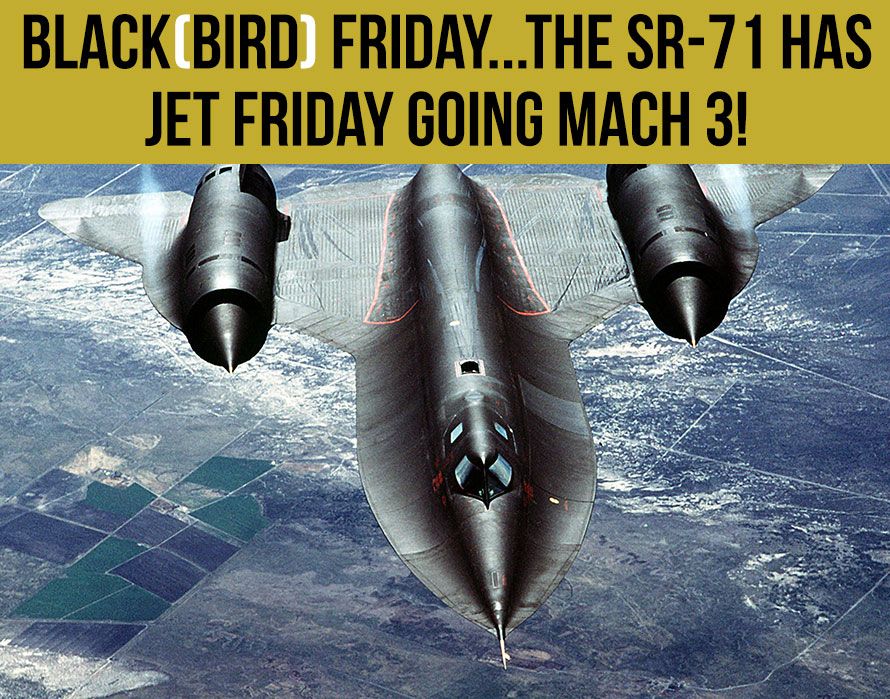 Hopefully, this finds you have survived all that turkey, and enjoyed some great football games. Now, it’s Black Friday and we are here to help you get through it. Remember, it’s still Jet Friday. So today we will learn a little bit about the SR-71 Blackbird. This reconnaissance bird was introduced into service in 1966 remained operational until retired by the U.S. Air Force in 1998. NASA operated two SR-71s until 1999. Today they adorn various air museums across the U.S.

This aircraft was operated by a Pilot and a Reconnaissance Systems Officer who sat in tandem cockpits. It had a makeup that was 9/10 titanium. In the video, you’ll learn where the CIA got the material to build these birds, and how. The air frame’s body flexed, shrinking and expanding with the heat, and the fuel tanks constantly weaped while on the tarmac ready for its mission. Due to the leaking, which could not be controlled on the ground, the Blackbird would take off on nearly empty tanks. Once airborne it would rendezvous with a fuel tanker, fill-up with JP-5, and then streak off at Mach 3 to take ground-level photos around the world from a cruising altitude of about 80,000 feet.

It was a stealth aircraft, but If it was detected by a Surface-to-air (SAM) missile site, by the time the SAM was able to lock on, the SR-71 was well out of range. The Blackbird’s defense was its incredible altitude, well above the ceiling of fighter aircraft, and its speed, much faster than any fighter aircraft. Also, watch LA Speed Check – SR-71 Video

So here is to surviving, or avoiding, Black Friday. Sit back and enjoy our twist on this Jet Friday, with Blackbird Friday! We hope you enjoy a little history and we invite you to share this article with your friends and colleagues. If you like this article, check out more of our #JetFriday articles.