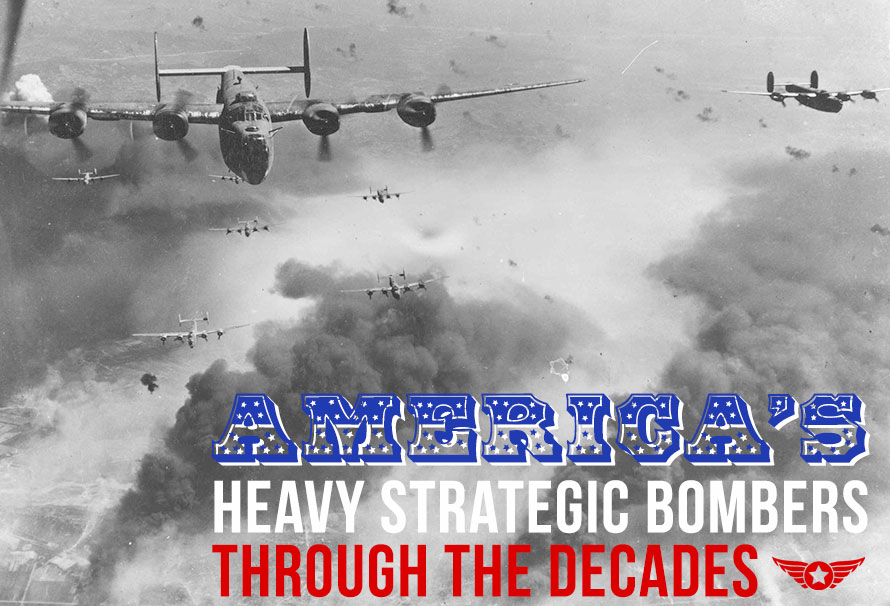 The earliest use of aerial bombing began with military balloons. As early as 1849, Austrians would use pilotless balloons to drift over a besieged Venice and using timers, rain terror down upon the citizens. The combination of starvation and the psychological effects of more potential aerial bombing led to Venice surrendering two days after that attack.

Following the first delivery to the military of an airplane by the Wright Brothers in 1908, it would be only a short time before the airplane’s mission would expand beyond transport or reconnaissance. In November of 1911 during the Italo-Turkish War, a pilot named Giulio Gavotti hung out the side of his flimsy aircraft and dropped bombs on troops below. From 600 feet above he tossed four grapefruit sized grenades over the side but never inflicted any casualties. But he showed the potential that airplanes could do more than recon. They could also attack. Hear Gavotti explain in his own words in “Libya 1911: How an Italian pilot began the air war era”

During World War I, bombers became more commonplace and carried out full bombing operations. Both sides used the bomber as a tool and not just a separate mission of smaller aircraft. From the beginning of the war in 1914 to the end of hostilities in 1918, the use of lightweight aircraft for bombers was greatly upgraded to the development of much larger planes that carried much bigger payloads.

By 1914 the Voisin III became the world’s first true bomber. It was powered by a single 120 hp radial engine and its payload was limited to 132 lbs of bombs. This French bomber was also the first aircraft to score an air-to-air kill when one of its two crew manning the machine gun downed a German aircraft whose two operators were armed only with two rifles.

By the end of the war, bombers would be as big as the Caproni Ca 4, an Italian Air Force three-winged bomber that could carry 3,197 lbs of bombs. There was also the giant four-engine Zeppelin Staaken R. VI of the German Air Force with a bomb payload capability of 4,409 lb.

Between the world wars, aircraft became bigger and faster and offered more protection to its crew. Both Axis and Allies were using heavy bombers like Germany’s Heinkel He 177, powered by four 24 cylinder engines producing 2,900 horsepower each. Like other bombers of its time, the ceiling was much higher than the aircraft of WWI, at 26,247 feet with a range of nearly 3,500 miles. It held seven machine guns for defense and could carry a payload of 13,300 lbs internally or 15,800 lbs externally.

But America was busy building their own heavy bombers in preparation for entering World War II.

Heavy Bombers of the United States

By the time the U.S. entered World War II, the B-17 Flying Fortress was already performing bombing missions with the Royal Air Force. The B-17 was a four-engine bomber that had a crew of 10. The RAF found early versions of B-17 they flew since 1935 to be more vulnerable to fighter attack and prone to mechanical issues. By the time America entered the war, the B-17E version was equipped with nine machine gun positions, up to 8,000 lbs of bombs, and the secret Norden bombsight, which made the Flying Fortress extremely accurate and a very formidable platform to attack.

The B-24 Liberator was another WWII era heavy bomber. It was introduced into service in 1941 and served in all theaters of WWII. From its initial flight in 1939 until the end of the war in 1945 there were nearly double the number of B-24s produced (18,500) over the Hollywood favorite, B-17 (12,741). Still, the B-24 did not get a lot of respect when it came to being represented in WWII movies of the time. It was faster than the B-17 and had a longer range, which made it more popular for the bombing campaigns in the Pacific. The B-24 had a range of 1,540 miles and could carry 5,000 lb of bombs on a long-range bombing run. It defended itself with ten .50 caliber machine guns in 6 different positions on the aircraft.

Introduced into service in May of 1944, this four-engine behemoth aircraft was one of the largest aircraft during its time. It flew during WWII and the Korean War and included state-of-the-art technology. Its cabin was pressurized and the four remote-controlled machine gun turrets were directed by a fire control computer system. Each of the four engines produced 2,200 hp, giving the B-29 a cruising speed of 217 mph and a service ceiling of 33,000 ft. With a payload of 12,000 lb, the B-29 could travel a 1,600-mile radius. This made it very important in winning the war in the Pacific where it launched from deep inside China to bomb steel and aircraft facilities in Japan. Two B-29 aircraft, the Enola Gay and Bockscar, dropped atomic bombs on Japan that brought about the end of WWII. The B-29 was also a key bomber throughout the Korean War.

With a wingspan of 230 feet wide and a length of 162 feet long, the B-36 was the largest mass-produced piston-engine aircraft ever built. It was introduced into service in 1948, but with the introduction of the long range, jet-powered B-52 in 1955, the B-36 had a short-lived career and was retired in 1959. The Peacemaker was unusual due to its six rear-facing compound radial engines. It had an incredible range of 10,000 miles. On December 7, 1948, the seventh anniversary of the Japanese Raid on Pearl Harbor, the B-36 displayed its worthiness. A Peacemaker flying from Carswell AFB in Texas flew to Hawaii and simulated a bombing mission by dropping a 10,000 lb dummy bomb and then returned to its Texas base without being refueled. The B-36 had a crew of 13 and could carry a staggering payload of 72,000 lbs of bombs, including a nuclear bomb payload. It could cruise at 230 mph but had a maximum speed of 435 mph. 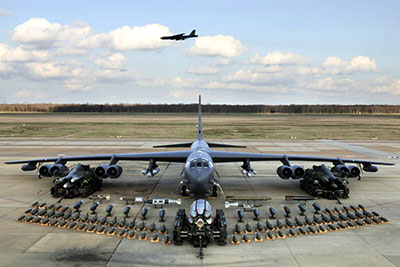 Boeing B-52H static display with weapons, Barksdale AFB 2006. A second B-52H can be seen in flight in the background

The B-52 is a long-range, subsonic, strategic bomber. It was introduced into service in 1955 and is still in active duty today with the U.S. Air Force. It is powered by eight turbofan engines that produce 17,000 lbf each. The cruising speed is 650 mph with a combat radius of 8,800 miles. The service ceiling for the B-52 is 50,000 ft. Between 1952 and 1962 there were 750 bombers produced. It has a payload capability of 70,000 pounds of mixed ordnance of bombs, mines, and missiles. It has carried more than just bombs over its 60+ decades. It has hauled everything from drones, components of the space shuttle, cruise missiles, and nuclear bombs. It broke 11 distance and speed records in January of 1962 when it flew nonstop from Japan to Spain without refueling. The B-52 has served over the jungles during the Vietnam War, the Iraq deserts during Desert Storm, over Afghanistan in 2001, and in 2003 in Operation Iraqi Freedom. The B-52 is still active and strikes fear around the world. It is used as a deterrent by just being stationed near a theater with its potential damage to an enemy’s infrastructure.

The B-58 was the first bomber to fly at Mach 2. Introduced into service in 1960, this sleek looking supersonic, high flying delta-wing bomber never saw combat. It had a lifespan of 10 years from 1960 to 1970 and never saw action during the Vietnam War. It had a ceiling of 63,000 feet and a range of 5,124 miles. Like the B-52, the Hustler could carry a nuclear payload. It had 4 afterburning turbojet engines, each producing 15,600 lb of thrust, propelling this bomber to 1,321 mph. The crew of three, a pilot, navigator/bombardier, and defense systems operator, all sat tandem with escape capsules.

As one of the United States’ three active strategic bombers, the B-52 joins the B-1 Lancer and the B-2 Spirit. They each have seen action around the world from Vietnam to Afghanistan. While only the B-52 and B-2 are capable of carrying nuclear weapons, all three can deliver large amounts of devastating conventional weapons.

The Lancer is also known as the Bone (B-One) by the pilots and maintenance community that keep it flying. The B-1 has a crew of four that sat in a side-by-side arrangement, two in front and two directly behind. Like the B-58, the Lancer can reach a maximum speed of Mach 2+ and has a swept wing design for stability at high speed, high altitude missions. The B-1 has seen combat from Afghanistan, Iraq, and Kosovo. The B-1 carries the latest payloads of both guided and unguided weapons to deliver massive quantities of bombs anywhere in the world. Unlike the B-52 and B-2, the B-1 does not carry nuclear weapons.

The B-2 is a strategic multi-role bomber that uses stealth technology to keep it hidden as it carries out its mission. The B-2 was introduced into service in 1997 and only 21 have been produced. The B-2 is driven by four turbofans, has a speed of 680 miles an hour and had a maximum altitude of 50,000 feet. The B-2 carries not only nuclear weapons but conventional weapons like precision-guided 2,000 and 5,000 lb JDAM munitions. The Spirit is also capable of carrying a 30,000 lb bomb known as Massive Ordnance Penetrator. The B-2 has seen combat from Serbia, Iraq, and Afghanistan. Though the B-2 is expected to fly for another twenty years or more, the B-21 Raider, similar in the flying wing design of the B-2 and also a stealth bomber, is expected to roll out in the mid-2020s.

With many of the avionics and radar systems of these older aircraft originating in the 1970s and 1980s, the electronics and electromechanical systems can be over three to five decades old. Like many of the aircraft that originated during the ’60s, ‘70s, and ’80s that are still flying today, active strategic bombers can face maintenance, repair, and overhaul (MRO) dilemmas all over the aircraft. These MRO problems often involve obsolescence issues where documentation is missing or defective parts cannot be replaced due to OEMs no longer supporting that system, or the OEM may no longer exist.

To keep aging bombers like the B-1 flying, their systems must still be maintained even when facing obsolescence issues. Avoiding scrapping repairable parts requires a depot to develop the missing technical data or reverse engineer broken or missing parts. This is especially important when aging platforms like the B-1B Lancer are proposed to fly into the 2030s. 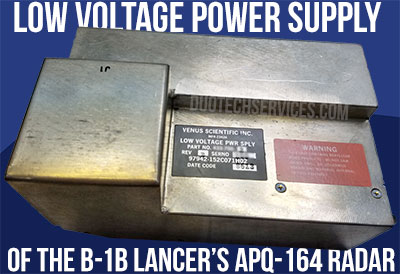 The low voltage power supply, a component of the B-1B Lancer’s APQ-164 radar, is shown here under repair by Duotech Services technicians. Duotech specializes in repairing obsolete equipment that the OEMs no longer support, or if they do, the repair comes at a cost well over repair percentage guidelines.

Instead of scrapping repairable equipment, we offer solutions to keep your legacy aircraft in the air and your obsolete mission-critical equipment functioning.

Duotech maintains an AS9100D registration and is a qualified repair station for hundreds of items. Contact Duotech Services today about your MRO needs. Duotech has the capability to repair thousands of different items. Begin your search for you Part Number here or request a Quote for Repair now.

The History of the Bomber Aircraft