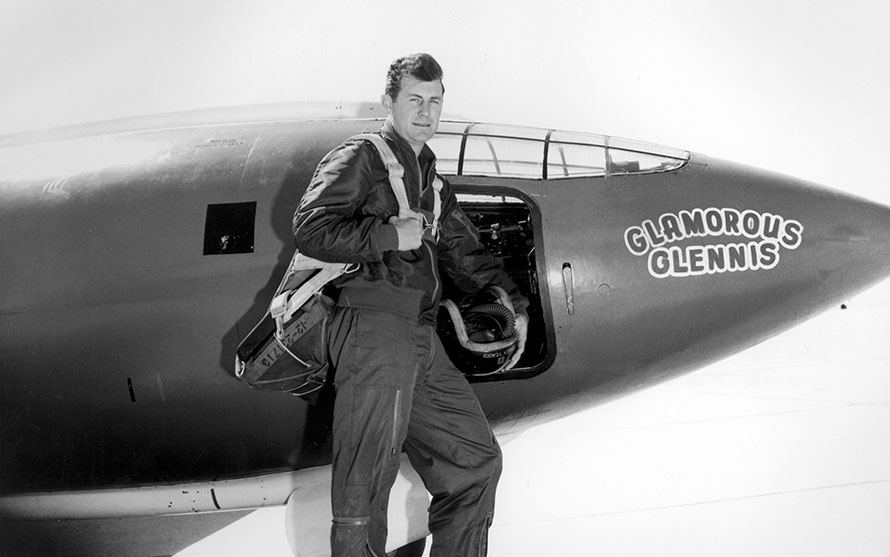 A B-29 Superfortress cruises over the Mojave Desert. The heavy bomber is not on a training mission, but rather participating in an event that will shape the future of flight. Strapped to the bottom of the Superfortress is a rocket-powered experimental aircraft and inside of that is Chuck Yeager, a test pilot of the recently established United States Air Force. Once released from its position on the bottom of the B-29, the X-1 drops clear of the bomber and Yeager ignites the four rockets. He quickly climbs to an altitude of 45,000 feet and with a big sonic boom shoots past Mach 1 (767 mph), reaching Mach 1.06 (813 mph) on October 14, 1947, and into the history books.

He would continue as a sought-after test pilot because he flew with such precision test flights that the data he provided was invaluable. He was also a very cool pilot under very stressful situations. When problems arose in an experimental aircraft that could prove catastrophically fatal with any other pilot or situation, he calmly thought his way through the issues to bring his aircraft back under control. By the time he retired from the U.S. Air Force in 1975, he had received the rank of Brigadier General.

Following his Air Force service and test pilot years, Yeager would enjoy the invitations that would come from the fame he earned during his adventurous life: movie appearances, many public speaking engagements, driving the Corvette pace car at the 70th Indianapolis 500 race, an appointment by President Reagan to the commission investigating the Space Shuttle Challenger explosion, and so many more.

If you want to watch a great video documenting when Yeager broke the sound barrier, we have embedded it below. If you enjoy this video, please share our page with your friends and colleagues. If you like jet-powered aircraft then check out all our many other #JetFriday posts.