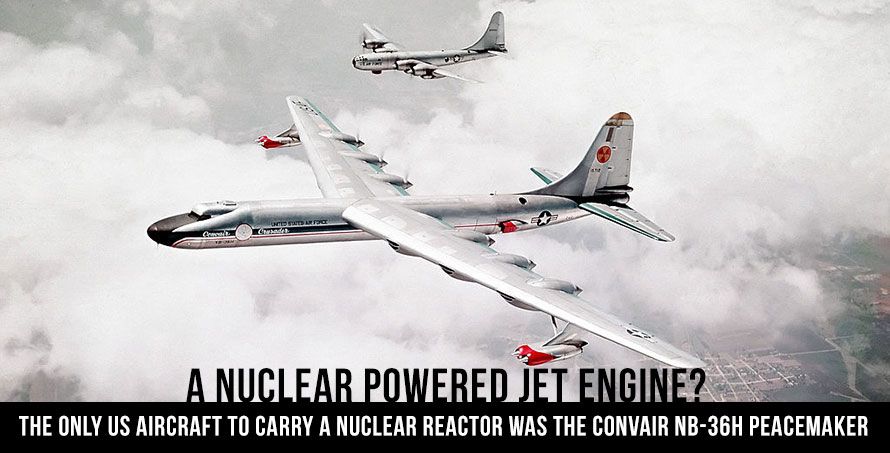 Recently, we stumbled across an article by GE Reports called, “The Nuclear-Powered Jet Engine, Ceramic Turbines And Other Gems From The History Of Flight.” From one article to the next, we learned about General Electric’s history as an innovator in jet-powered aircraft since the very beginnings of aviation.

We’re not going to lie, the nuclear-powered jet engine caught our attention. As we digested the concept of an aircraft cruising across the sky powered by a nuclear reactor, we found ourselves following a path through the articles that carried us from a secret group called the Hush-Hush Boys and onto the most powerful jet engine in the world.

The article kicks off with GE entering the history books of aviation because of the first turbo supercharger designed by a GE Engineer Sanford Moss. From concept to development in 1918 and then successfully testing Moss’ supercharged engine in a Liberty V-12, GE won a contract to provide superchargers to the Army. Today, there are more than 30,000 aircraft with General Electric engines in service around the world.

Hush-Hush Under Penalty of Death

It was in 1941 that a small, select team of GE engineers was assembled to work on a top secret Army Air Corps project. The members of the team were told that they could not discuss what they were working on with anyone outside their group. This requirement led members of the team to nickname themselves as the ‘Hush-Hush Boys’

Joseph Sorota, a 96 yr old and last living member of the Hush-Hush Boys at the time of this video interview, tells that “The FBI man warned me that if I gave away any secrets, the penalty was death.”

The team was supplied a British jet engine designed by RAF officer Frank Whittle. Their mission as to rebuild and reproduce the jet engine so it could be commercialized for many aircraft. They were given six months to complete the redesign. They successfully did it in just five. At the ten month mark the Hush-Hush Boys had two working engines that would be shipped by rail across the country for testing in the Mojave Desert. The jet engine, officially named the I-A, would be fitted into what would become America’s first jet. This jet, the XP-59 designed by Larry Bell and powered by one of the GE turbo engines, would successfully fly to 6,000 feet in October of 1942.

The aircraft would later be designated the Bell P-59 Airacomet, America’s first jet powered fighter aircraft. The successful jet engine would be designated the J47 and became the first certified for commercial aviation. 35,000 J47s would be produced.

In 1954, GE would again push the limits when it came to jet powered aircraft. They would develop and test a nuclear-powered jet engine. GE modified two J47 turbojet engines paired with the Heat Transfer Reactor Experiment-1 (HTRE-1). Instead of using jet fuel, the nuclear reactor would supply heat directly to the turbojet engines. A modified B-36 Peacemaker bomber was modified by the U.S. Air Force to carry the GE J87 nuclear-powered turbojet engine, but it would never use the engines. The project was later abandoned in 1961. You can learn more about this subject at “Flying on Nuclear, The American Effort to Built a Nuclear Powered Bomber”

The article also briefly talked about the GE90-115B engine, the world’s most powerful jet engine. This General Electric high-bypass turbofan holds the Guinness Record for highest thrust at 127,900 lbf. The engine is rated at 115,300 lbf, but this record was set during a one hour triple-red-line engine stress test. This engine has set other records too, like when it powered a Boeing 777-300ER five and a half hours with one engine shut down from Seattle to Taiwan. Another record established by the GE90-115B was setting the longest flight by a commercial airliner. The Boeing 777-200LR traveled from Hong Kong, over the Pacific and the continental U.S., the Atlantic, and landed in London. The trip covered 13,422 mi for a flight time of 22 hours and 42 minutes. As of 2014, there have been 2000 of the GE90 turbofans built.

Not mentioned in the article, but definitely worth noting, is GE Aviation’s F110 afterburning turbofan jet engine. Different versions of the F110 powered three of the top fighter jets in the world.

The F-15K of South Korea, F-15SG of the Republic of Singapore, and the F15SA of Saudi Arabia are all-weather multirole strike fighters. They are derivatives of the F-15 Strike Eagle and are powered by two F110-GE-129 engines. These turbojet engines provide the fighters with 29,499 lbf each. The fighters can reach speeds of up to Mach 2.5 at 1,875 mph.

Duotech provides complete nose-to-tail support for the F-16 Fighting Falcon. Determined to provide the highest quality repair and engineering services for your F-16, Duotech accomplishes this at lower cost and shorter turn around times than the OEMs.

Enjoy the original article about The Nuclear-Powered Jet Engine, Ceramic Turbines And Other Gems From The History Of Flight on the GE Reports website. Share this JET FRIDAY article with your friends and coworkers using the social icons on this page. Have a great Friday!